From being a cook to being a makeup artist, sisters are each others' superhero. Check out how Kangana Ranaut turned interior designer for her sister, Rangoli Chandel!

It is a blessing to have a sister, especially a multitalented one as she becomes your saviour in every step of your way. From being your makeup artist to cooking your favourite meal, your sister can take on any role in life. She has seen you as a baby in diapers to a bride in the prettiest lehenga. When sisters are together, they need no 'misters' and they are enough to create or destroy the 'shanti' of the entire house. And an exactly similar bond is shared between Bollywood actress, Kangana Ranaut and her sister, Rangoli Chandel. (Recommend Read: Karisma Kapoor Wanted To Act In Grandfather, Raj Kapoor's 'Henna', Had To Opt Out For This Reason)

A couple of weeks ago, Rangoli had taken to her Instagram handle and had shared how her sister has turned stylist for her new house's griha pravesh puja. She had shared how her Kangana made sure that she looked her best on the most special day of her life. The star-sister had shared a couple of pictures from the big day, and had written, "In this lockdown, it was getting difficult to travel to my house site, luckily we were in the green zone, so Ajay and I decided to live in the house to get remaining exterior work done, We decided to postpone our house warming party and only did Pooja. In the morning when Kangana saw me leave for my house she was shocked to see me in my tracksuit almost screamed aren’t you getting ready?? I was like no one is coming. She said it’s a special day just do little something, and the little something she did was steamed my Paithani Sari, made me wear my wedding jewellery and did my eye make up." 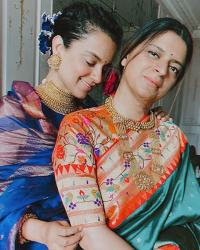 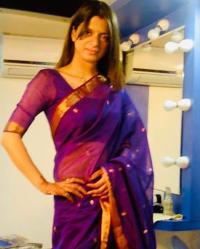 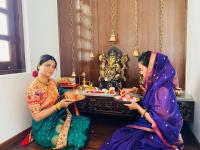 Recently, Rangoli took to her Instagram handle and shared how her sister, Kangana has turned interior designer for her new home. She posted a couple of pictures and wrote, "When she asked me what kind of interiors do I like, I said I don’t like torn, worn out, vintage,old-looking stuff, I don’t know what I like but I want new things to look new, I remember her face, that’s her style vintage, rustic, worn out and totally purana looking things .... it was out of her comfort zone, she has been incessantly working on this and today when I saw her put finishing touches I was stunned, I can say one thing, this is not a house to me it’s heaven it’s a blessing."

Earlier, in an interview with the Mumbai Mirror, Kangana had revealed that she had done tacky films at the age of nineteen for her sister. She had said, "I was just 19, on the threshold of a bright career, when the attack happened and it was a long, hard struggle to deal with this kind of perverse, sexist cruelty. Financially too, I was not strong back then. Girls around me would feel depressed by a bad hair day or because a meal was not to their liking. I was grappling with something far more real and yet had no time to sit and cry. I did tacky films, took on roles I did not deserve, accepted guest appearances, so my sister could be treated by the best surgeon in India. It took 54 surgeries." (Also Read: Ravi Dubey And Sargun Mehta Talk About Their 'Pati-Patni' Fights, Reveals How They Deal With It) 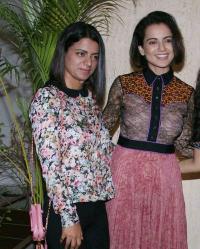 In January 2020, the star sister, Rangoli had taken to her Twitter handle and had thanked her sister for helping her in difficult times. She had written in her tweets that she can never pay back what her sister had done for her at that tender age of just 19 years old. Rangoli had talked about the horror of the acid attack accident on her and how even her parents were not able to face her and would faint. She had shared how her sister had stood by her side and had washed her wounds, worked day and night to pay for her treatment. (Don't Miss: 'Chachu' Varun Dhawan Helps 2-Year Old Niece Cut Her Quarantine Birthday Cake, She Loves Him Back)

She is your ‘person’, who dances out with you when life makes you question your existence. She is privy to the screenshots of the most private conversations of yours and becomes your confidante when you need to get something off your chest. Be it the odd afternoons visits or 4