Going by the latest update, looks like the day isn't far when we will spot Alia Bhatt, sitting by the fire alongside Ranbir Kapoor with Mangalam Bhagwan Vishnu prayers being chanted for them!

He had floored everyone when he played with curtains and towels in his debut film in 2007. 5 years later, another star kid entered the industry wearing Jimmy Choo, Manolo, Prada and Galliano and we were equally stunned. He was linked up with multiple A-listers of the industry and she had a steady boyfriend. Both parted ways only to be together soon. And that’s how Ralia (as Ranbir Kapoor and Alia Bhatt call them), came into being! (Do Read: Shweta Bachchan Made A Statement In White On Wedding Ceremonies, Resemblance With Navya Is Uncanny)

Ranbir Kapoor and Alia Bhatt have been dating for over two years now. Every now and then, we spot this couple attending events, holidays and going places together. Their families too love this couple (honestly, who wouldn’t?) and all that they are apparently waiting for is the senior Kapoor, Rishi ji getting all hale and hearty from the US so that they can proceed with the marriage. And going by the latest update, looks like the day isn’t far when we will spot Alia, sitting by the fire alongside Ranbir with Mangalam Bhagwan Vishnu prayers being chanted for them! 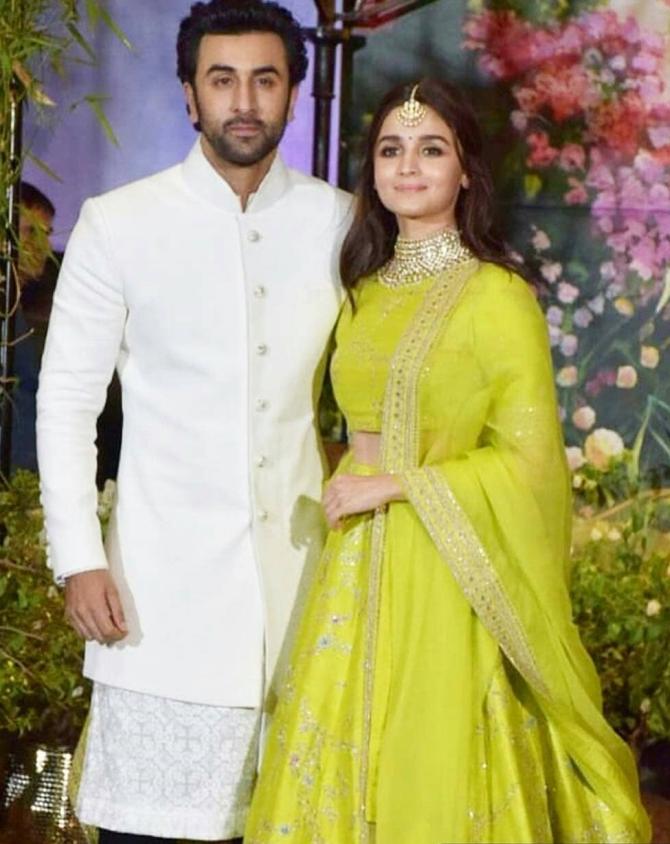 So excited we are, right? Alia Bhatt and Ranbir Kapoor are working on Ayan Mukerji’s mammoth project together, Brahmastra and we can’t wait to witness the magic of their chemistry sometime soon. The movie was supposed to release this year but has been pushed to 2020, the same year which is speculated to mark some ‘new innings’ in Alia and Ranbir’s life. As per a Mumbai Mirror report, Ranbir has apparently formally met his ladylove, Alia’s father, Mahesh Bhatt to ask for his daughter’s hand for marriage! Yes, you read that just right! The report also had it that a few happy tears had apparently been shed when the same was happening. How amazing is this! As much as Alia Bhatt and Ranbir Kapoor have always denied their wedding rumours, reports have been rife that the Kapoor khaandaan is just waiting for Rishi Kapoor’s recovery and for him to come back so that Alia and Ranbir’s wedding can take place. In similar lines, don’t you want to know which designer lehenga will Alia don on her special day? As per a SpotboyE report that came about sometime back, Alia Bhatt will be a Sabyasachi Mukherjee bride, quite like her contemporaries for her rumoured upcoming 2020 wedding. As per the report, Alia and Ranbir are planning to tie the knot in the first half of the year and she has apparently had a meeting too with the ace designer about her wedding dress! (Must Read: Shloka Mehta Arrives Hand-In-Hand With Husband, Akash Ambani For Reliance AGM, Ambani Clan Joins Too) 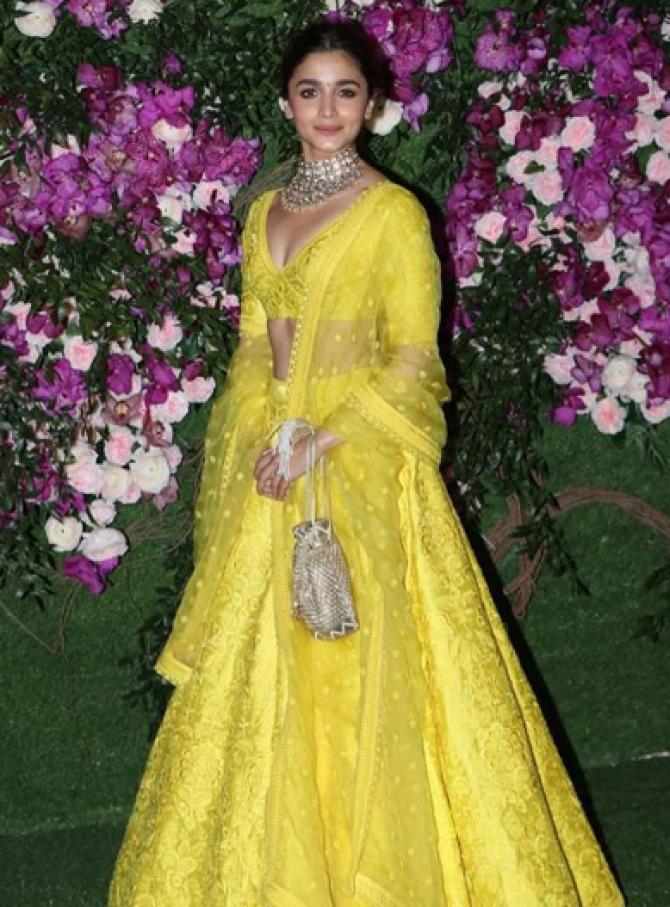 Alia Bhatt was the April cover girl for the Filmfare magazine, along with her best buddy and co-star, Varun Dhawan. In a candid chat with the magazine, we got to know about what’s happening inside the Kalank actress’s heart (read Ranbir Kapoor). Alia and Ranbir’s 2020 wedding rumours are all over the news and internet. Hence, Alia was asked about her rumoured April roka with her beau, Ranbir. To which, she had replied, “The only ‘Roka’ I’m going to is the restaurant in London. There’s no roka happening for me. And why are you putting a year to my marriage?” 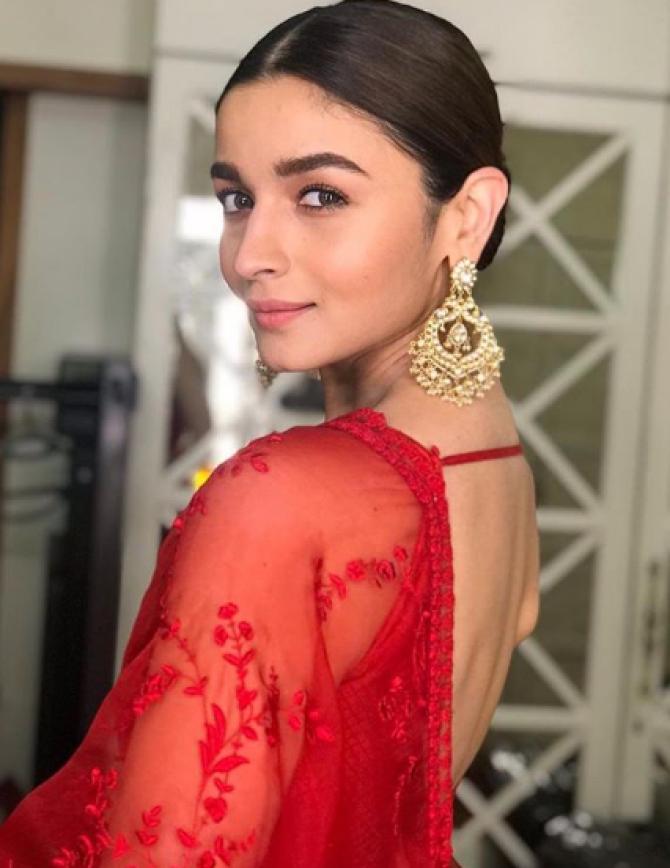 Alia Bhatt had also revealed her thoughts about tackling a person as ‘difficult’ as Ranbir Kapoor. She had shared, “He’s not difficult. He’s a gem.” She further added, “When I met him for the first time in my life. Again, let me tell you he’s not difficult. He’s a supremely simple person. He’s such a nice human being that I wish I was as good as him. As an actor, as a person, as everything. He’s way better a person than I am. And about getting married? Well, that’s the only thing that’s irritating right now. Every morning I wake up to the news that I’m getting married. I tell him what the hell. I guess he’s used to it.” It was Ranbir Kapoor’s birthday on September 28, 2018, and his mommy, Neetu Kapoor had taken to Instagram to post a heartfelt birthday wish for her son. What was notable was the picture had two lovebirds (Ranbir and Alia) and two future-in-laws (Neetu and Soni) together in one frame. While the picture was indeed noteworthy, we had also shared an interesting update with you. An insider had told online portal BollywoodLife that the mommies were discussing Alia and Ranbir’s marriage over the latter’s birthday dinner! Yes, a source had revealed to the portal, “Alia is in a great phase of her life right now. She is in love and they both are sure of each other. Marriage is certainly on the cards but it won't happen before 2020." (Also Read: This Bride Wore A Sabyasachi Lehenga That Will Remind You Of Deepika Padukone's Wedding Ensemble) In October last year, we had shared with you that Alia Bhatt and Ranbir Kapoor might take the ‘great vow’ after the latter’s father, Rishi Kapoor’s recovery. A close family friend of the Kapoors had thrown light on the same and had shared, “She has been welcomed into the family by everyone. So it’s not just Ranbir who loves Alia. His parents, sister and the rest of the sprawling Kapoor family adore her too. Marriage is on Ranbir’s mind for sure and he will get into it happily this time. The couple will wait until Rishi Kapoor’s recovery before discussing a date for marriage.”

Also, as per a Mumbai Mirror report, the Brahmastra co-stars are all set to buy a new love nest together in New York City. As per the same report, Ranbir Kapoor and Alia Bhatt are also planning to make a ‘chic little studio’ their lover’s paradise. The report had also stated that Ranbir’s mom, Neetu Kapoor is bestowed with the responsibility of hunting a new house for what looks like, the now ‘soon-to-be-married’ couple! It was also reported that Neetu ji had checked out a few properties too, for the same.

Ranbir and Alia, we can’t be more excited for 2020 to come soon!