Rana Daggubati has tied the knot with fiancée, Miheeka Bajaj on August 8, 2020 in a traditional ceremony at the Ramanaidu studios. Check out their mesmerising pictures.

Marriages are made in heaven and nothing in this world can match up to the happiness of getting married to the one you had fallen in love with. Falling in love with someone, who not only loves you and adores you, but stands with you like a pillar of strength makes the relationship blissful. It is magical to see how walking hand-in-hand turns into saat pheras across the holy fire and a beautiful relationship culminates into the sacred thread of marriage. And Tollywood’s most eligible bachelor, Rana Daggubati has joined the bandwagon of married actors as he tied the knot with fiancée, Miheeka Bajaj. (Also Read: 'Bigg Boss 12' contestant, Srishty Rode's Ex, Manish Naggdev Finally Finds Love, Gets 'Rokafied')

Popular as 'Bhallaldeva' of Baahubali, Rana Daggubati had broken million hearts when he had announced the news of being ‘taken’. The handsome hunk of the southern film industry, Rana had taken to his IG handle on May 12, 2020 and had confirmed his relationship status with Mumbai-based entrepreneur, Miheeka Bajaj. Posting an adorable picture of him and Miheeka, Rana had captioned it as “And she said 'yes' #MiheekaBajaj.” For the unversed, Miheeka is a Mumbai-based interior designer, who runs an event management and decor company, Dew Drop Design Studio. She is a London graduate, having completed her Masters in Interior Architecture from the University of the Arts, London.

On August 8, 2020, Rana Daggubati and Miheeka Bajaj became each other's forever in a memorable lockdown wedding. The wedding ceremony commenced in Hyderabad, and first pictures from the same have started pouring in. The wedding of the year was a close-knit affair with only family and close friends in attendance. Even though there were restrictions on the celebration, the Rana and Miheeka's wedding was every bit grand as imagined, and the pictures speak the tale of the grandeur of the ceremony. Check it out below:

The gorgeous couple, Rana Daggubati and Miheeka Bajaj had kickstarted their pre-wedding functions with haldi ceremony on August 6, 2020. For the ceremony, Miheeka had looked stunning as she donned a yellow lehenga with green patchwork. She had accentuated her traditional look with jewellery made of shells. Miheeka choose to go for a subtle makeup with kohled eyes and bright pink lipstick while leaving her hair open. Rana had complemented his ladylove, Miheeka in a crisp white shirt and matching mundu (dhoti). Their haldi was followed by a mehendi ceremony. For the mehendi ceremony, Miheeka had stunned in a pink lehenga and she had rounded off her look with a beaded maang tikka, big jhumkas, pink lips and open wavy hair.

For the bhaat ceremony, Miheeka had looked gorgeous as ever in a red and grey lehenga, which she had accentuated with stone-cut earrings. Her outfit was very special as it was her mother's bridal lehenga and Miheeka had worn it gracefully on her bhaat ceremony. Keeping her look all glam yet minimal, Miheeka had opted for natural-looking makeup. Sharing the picture of Miheeka, her mother had emotionally penned down a post, which could be read as "Baht function wearing my wedding outfit, could not stop crying my baby is all grown up. #BAJaoeD." (Also Read: Soha Ali Khan Captures Her Daughter, Inaaya Naumi Kemmu Admiring Her Own Artwork)

Post the roka ceremony, the pre-wedding celebrations had continued for the newly-engaged couple as Miheeka Bajaj had posted a picture from 'the celebrations continue' in June. Miheeka had stunned in a mint green Jayanti Reddy lehenga and posting a picture of herself, she had written, "The celebrations continue! Thank you for making my day so much more special! @krsalajewellery @jayantireddylabel @makeupartisttamanna @tpt.toast." (Also Read: Ankita Lokhande Shares A Picture Of Herself Holding A Photo Frame Of Sushant Singh Rajput's Mother) 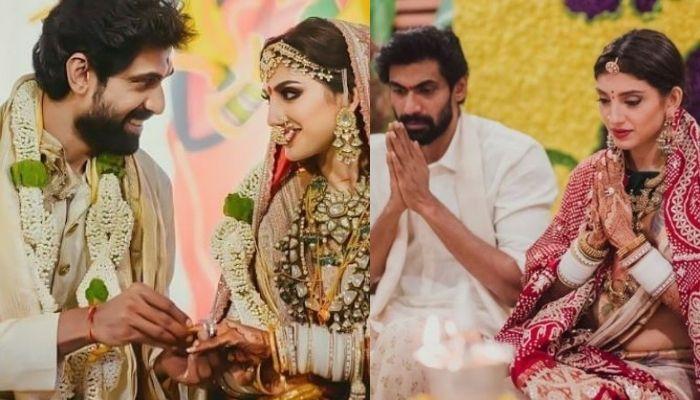 Marrying the one you love is a blessed feeling as it feels like fulfilling the biggest dream of your life. Dreams of living together, starting a family and growing old together come true the moment your families nod for your rishta and it starts with the sindoor moment. Celebrating your first