Rakhi Sawant Reveals Why Her Husband Stays Away From Limelight, Shares Reason Behind Secret Wedding

What began as an initial declination of her wedding, it was only later when Rakhi Sawant had finally admitted to being a married woman. She now reveals why her husband is never to be seen.

Rakhi Sawant- naam hi kaafi hain! Controversy’s favourite child, we bet Rakhi abides by the philosophy, ‘you can love me or hate me, but you can’t ignore me’! Ever since Rakhi made her advent into the glamour industry, there has been no looking back for the actress. From her Bigg Boss 1 stint, her swayamvar, infamous affairs, marriage announcement to actual marriage, this rockstar never ceases to grab the headlines. (Do Read: Neha Dhupia's Hubby, Angad Bedi Posts The Most Heart-Warming Anniversary Wish For His In-Laws)

On July 29, 2019, Rakhi Sawant had posted an array of pictures dressed as a bride on her Instagram. While the pictures looked way too real to be deemed as a mere shoot, it was her caption (which said bridal shooting) that had partially assured that the snaps belonged to a shoot. In the pictures, Rakhi had donned a white wedding gown with a veil over her head, her locks left loose, chooda and mehendi as she held a bouquet of tulips. Her purple makeup too created quite some noise. Here is the picture:

Mika Singh To Host A 'Swayamvar', Rakhi Sawant Is All Set To Participate, Reports Suggest 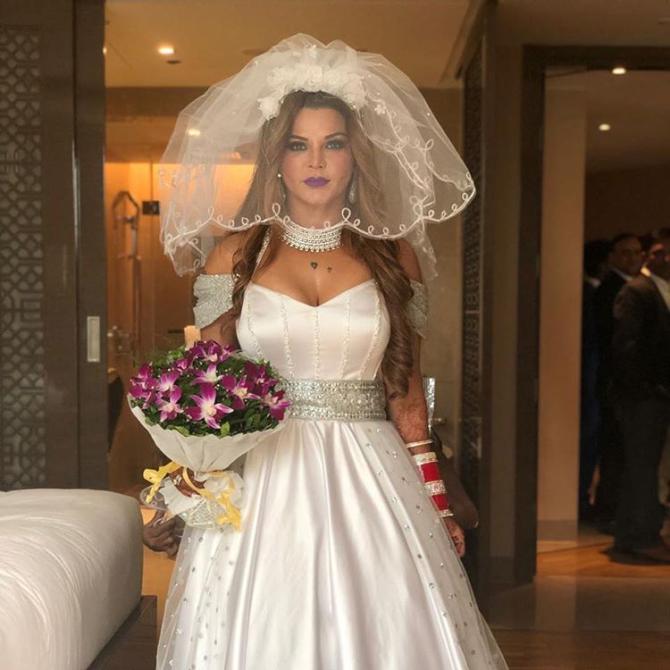 What began as an initial declination of her wedding, it was only later when Rakhi Sawant had finally admitted to being a married woman. Yes, for the uninitiated, Rakhi is now a married lady and is having a gala time flaunting her chooda, sindoor and mangalsutra. While there have been an array of post-wedding pictures of the Main Hoon Na star, her hubby has been missing from all of her pictures. In a recent interview with the Hindustan Times, Rakhi revealed the real reason behind her hubby’s disappearance from the limelight and stated, “Mere husband ko media etc pasand nahi. Unko kisi ke saamne aana nahi tha. Shaadi toh family ke beech mein hoti hai, duniya ko thhodi na bulana hota hai!”

Rakhi Sawant also spoke about her wedding and shared, “He is a Hindu NRI and I am a Christian, so I did a court marriage and had a Catholic wedding. The wedding was intimate with just family members. My husband works with Donald Trump’s company as an employee.” Further talking about how love bloomed, Rakhi stated, “He whatsapped me. Messaging and then talking to him, we became friends with the passage of time. This happened about a year-and-half back.” The Dekhta Hain Tu Kya performer also added, “Mera pati mere liye parmeshwar hai.” 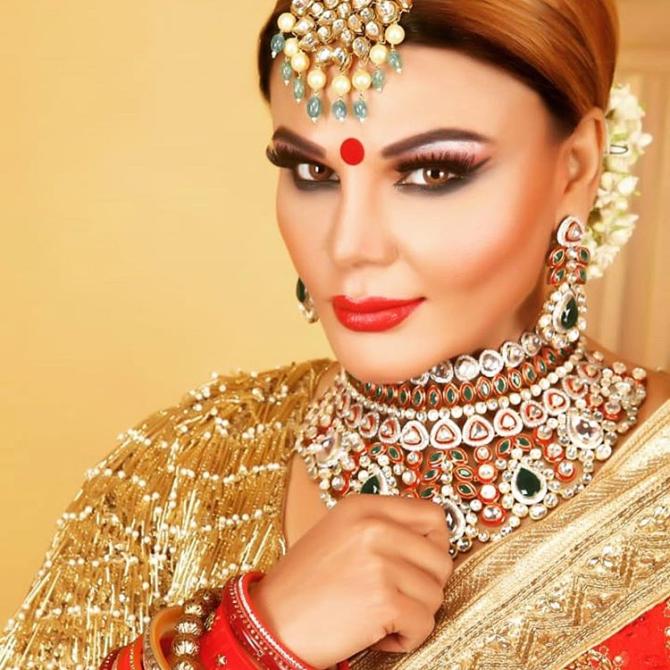 When the first pictures from Rakhi Sawant’s wedding came about, she had refuted her wedding speculations by saying, “I was doing a bridal shoot at JW Marriott, I don't know why people are saying that I am married. I am not married, I am not in a relationship. I am very much single.” It was only later when she had confirmed the news of her wedding to SpotboyE and had revealed, “Main dar gayi thi, haan maine shaadi kar li hai. I am confirming the news with you today. (I was scared but yes, I got married. I am confirming the news with you).” (Must Read: Radhakrishn's Sumedh Mudgalkar Had To Convince His Mom That He Isn't Dating Co-Star, Mallika Singh)

Rakhi Sawant had also revealed the name of her hubby, whose name is also emngraved on her chooda, “His name is Ritesh and he is in the UK. In fact, he has already left. My visa is underway and I will join him. Of course I shall continue to work whatever I get in India, so will shuttle for that. I always wanted to produce TV shows and I think my long-standing dream will now be fulfilled." She had also shared, "I thank Jesus for giving me such a wonderful husband. He was my fan ever since he first saw my first interview with Prabhu Chawla.” Do you know, Rakhi Sawant had actually prayed to be her NRI hubby’s wife? Yes, she had shared in the interview, “After knowing him, I prayed very hard to Jesus that I must become his wife. Woh khawish toh poori ho gayi (My this dream is now fulfilled). God has been kind to me so far." She had also split the beans on her dual style and her family’s reaction to her wedlock, “My mom, brother and everyone in the family are elated. They all were there at JW Marriott. We had a Hindu and a Christian wedding both in the hotel itself. Prior to that, we had got married in Court earlier in the day."

How did love happen for Rakhi Sawant and Ritesh? She had shared, "Dil mein ghanti nahin baji, I told him. He promptly asked, 'Mere liye dil mein ghanti bajti hai kya?' I said I need time to think. As more time rolled by, I realised I was falling in love with Ritesh. And, it was happening so very naturally. Trust me, I met him for the first time only 15 days before our wedding. He came down and I was sure that I had met the right guy." (Also Read: Deepika Padukone Reveals What Attracted Her To Ranveer Singh And She Is Absolutely Right) Rakhi Sawant had also revealed about her hubby and had shared, “Ritesh is a very private person and does not prefer talking to the media or being seen about much. He is a businessman and a wonderful, sorted man.” Rakhi also plans to have babies by 2020 as she feels that her body clock is ticking. She had also revealed that her hubby will be ready to face the camera after they do a photoshoot with their baby. Rakhi had also revealed in an interview with The Indian Express that she wants to have triplets like Farah Khan.

We wish Rakhi and Ritesh, a very happy married life!