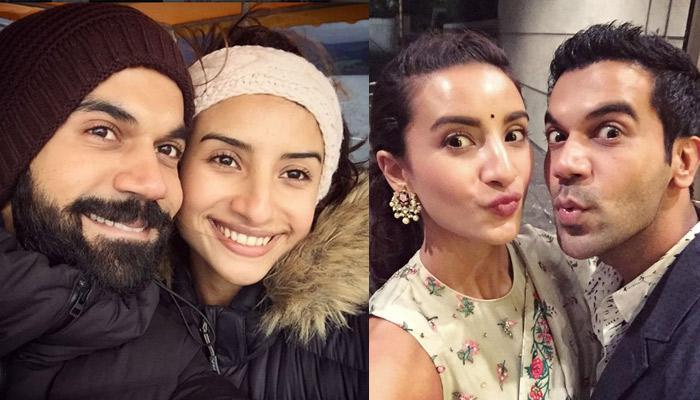 The moment fans come to know about their idol celebrities are dating, they go gaga over it. Fans want to know everything from their relationship status, their marriage plans or even, how they wish each other on their respective birthdays or the gifts they give to shower their love. The Fanne Khan actor, Rajkummar Rao is back in the news again as his way of wishing his girlfriend; Patralekha on her 28th birthday along with the most heart-warming words are going viral.

Yes, you read it right! On February 20, 2018, Rajkummar’s girlfriend, Patralekha turned 28-year-old and the doting boyfriend took to his twitter handle and wished his ladylove with the most touching words. The caption on the picture could be read as, “Happy Birthday to the most gorgeous girl Patralekha. Here’s to more love, peace, fun, travel and happiness. More power. Biggest hug and all my love.” On such a touching tweet, Patralekha replied with a warm thank you followed by three heart emojis. This is so aww-dorable, isn’t it? Check out the picture he posted of his beautiful girlfriend: 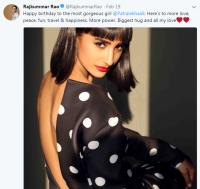 Clearly, the bar of relationship goals is soaring high between Rajkummar and Patralekha. Sometime back, the news of Rajkummar dating his co-star from the film CityLights came as a surprise to all. Commenting on the same, the actor in an interview earlier said, There are so many things that we read about ourselves. A lot of people think that we are married. But all I want to say is that we are single and happily in a relationship. Reports keep coming up about how we were fighting outside the gym or indulging in PDA… but we never respond to them.” And guess what, the cutesy couple also have marriage on the cards but not so soon. When asked earlier about their marriage plans, he retorted, "Not right now. Both of us want to focus on our respective careers, and we’re not thinking about it. Marriage will happen for sure — but I don’t know when." His replies clearly shows that they are dedicated towards each other and this is depicted in Rajkummar's birthday wish for her too! (Recommended Read: Ankit Tiwari Shares The First Ever Pic Of His Fiancee Pallavi Along With A Lovely Message)

After being featured as a couple in CityLights, the couple also worked together in the web series Bose: Dead/Alive. And there are chances that we will get to see the couple reuniting on-screen soon. When asked to Patralekha if she is going to work with boyfriend Rajkummar again in the near future, she mentioned to the leading tabloid, “This year, we are going to shoot for something really amazing. We haven’t signed it yet, but we are in talks.” On the work front, Rajkummar will be seen in upcoming films like Fanne Khan, Love Sonia and Ek Ladki Ko Dekha Toh Aisa Laga. (Suggested Read: Anushka's Touching Reply To Virat's Pic Of His 'One And Only' Should Give Marriage Goals To Millions)

Rajkummar your way to showcase your love for Patralekha is really sweet. We cannot wait to see you both as Mr and Mrs.

Next Read: Pic Of Aishwarya And Aaradhya Enjoying Swing In A Park Is All About 'Maa-Beti Ka Pyaar'