Priti Pratap Singh, a true connoisseur of textiles, gave a tour of her home in Delhi. Her home shows her taste in royal antiqueness as it has been crafted with elegance. Check it out!

Priti Pratap Singh, princess of the erstwhile kingdom of Kuchaman deserves a special mention in the genre of interior decoration and as a textile enthusiast. She had inherited her Delhi home back in the 1970s and started to transform it into a visual treat by crafting it minutely with every detail. Her father was an Oxford-educated ruler of Kuchaman (a place in between Jaipur and Jodhpur), and her mother had belonged to feudal talukdars (in Lucknow). She had imbibed the cultures of two vanishing worlds and became something on her own. Later, she was married to a Goan politician, which enhanced her visuals even more!

Amidst all the hustle and bustle of Delhi, Rajkumari Priti has created a place of solace. She has designed a home where she is surrounded by royal heirlooms and a touch of modern antiques. So, without any further ado, let's jump straight into it as we give a virtual tour of her Delhi home. 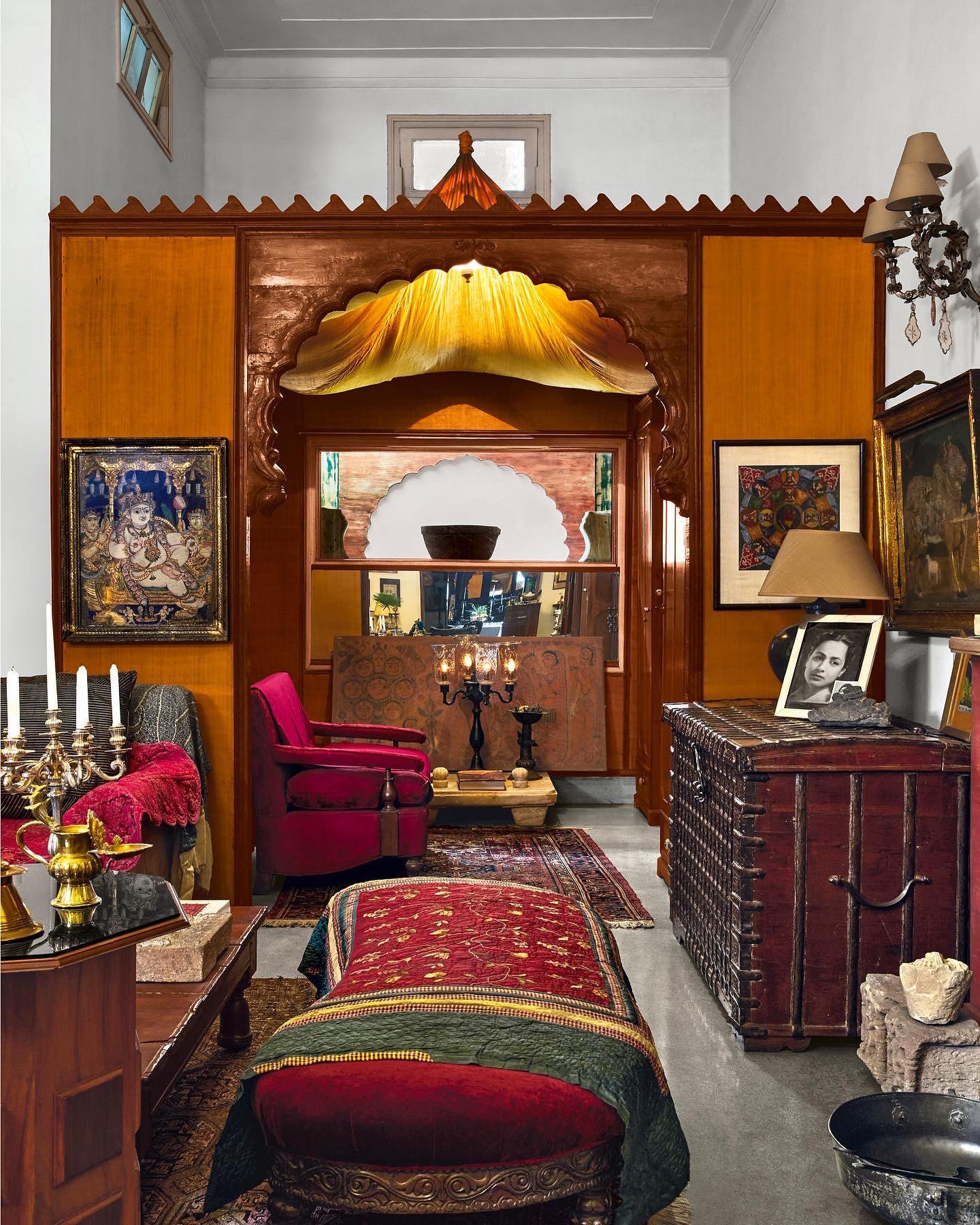 The living room looks alive with all its antiquities. The centre of the room has a traditional granite table that is surrounded by plush sofas and bohemian pillows. The centre table is decorated with a copper vase and lots of flowers to incorporate nature within the pieces. Priti had put much thought into changing the cavity of the living room to a gorgeous baithak. She had decorated it with a saffron silk tented canopy and added a wooden arch to complete its whole look. The walls are decorated with heritage paintings and art.

A part of the living room where memories intertwine with history The interiors of Rajkumari Priti Pratap Singh speak for themselves as how rich, elegant, yet modern it looks. Every room has a touch of Rajasthani regalness along with a trendy bohemian vibe. The walls are all white-washed, but the decor makes it look like alive with colours. Her house is surrounded by pieces collected from everywhere in this world. Be it the wooden carvings from Gujrati woodwork or French sconces from London, or interior art from her traditional roots, Priti tried to mix every detail possible. She believes that her living room is the room of showcase, from a cupboard stocked with Priti's quilts for customers to a beautifully painted Nathwada pichhwai above the fireplace to sepia photographs on a treasure trove or the antique textiles covering the walls. 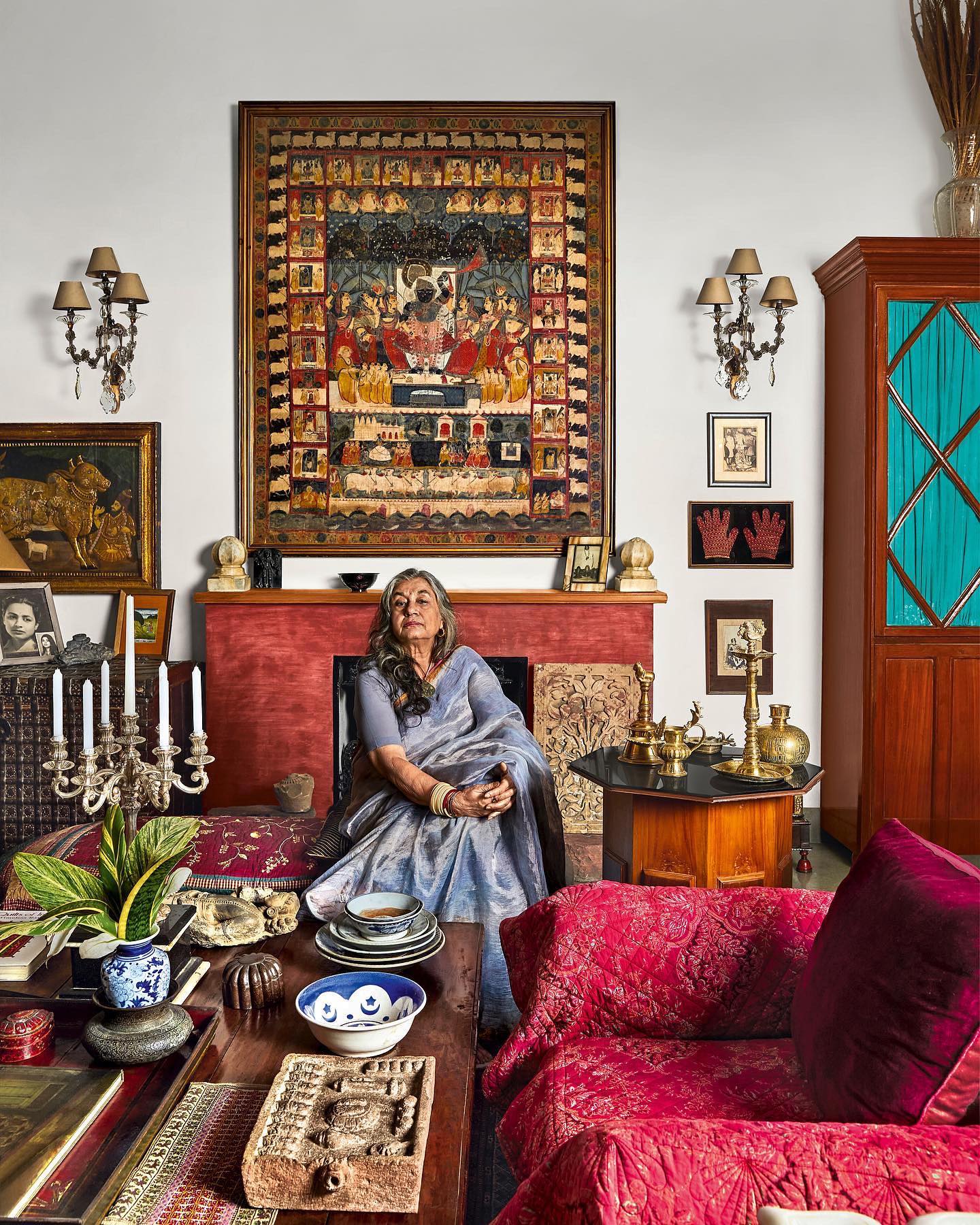 Amidst all these, she didn't miss a chance to put her handiwork on the show. Priti says that this house is like memories intermingling with history (personal history, family history and work history). She puts it in a conversation with Architectural Digest as, "memories interwoven with history." The entrance to the dining hall has a beautiful wooden carving, and above the bar, there's a textile gracefully glassed on the wall. As Priti is a textile connoisseur, she didn't miss a chance to incorporate her love and passion into her home. The narrow yet lavish dining hall speaks the richness of itself. The room has a long seven-seater table with chairs, a wooden carved cabinet, silverware, a sofa decorated with bright coloured fabric, and a chandelier. The dining hall was supposed to be a kitchen, but the Rajkumari Priti Pratap Singh transformed it into a dining space by creating two windows and a doorway to let the light and wind play. In an interview with Architectural Digest, she said:

"The cavernous rooms were gloomy and the layout impractical. I converted the old kitchen into a dining room, relocating the new kitchen behind the living room. I also punched in skylights, and mirrored redundant doors, to create light and space." Priti Pratap Singh's bedroom has a very subtle touch of regalness. She has decorated her bedroom with a four-legged wooden bed along with quilts and cushions designed by herself and adorned the wall above it with a framed piece of antique brocade. A royal silk emblemed sofa is placed in the corner of her room along with a traditional wire-worked side table. She has even hung a jamdani silk piece on her Belgian dressing table. And adorned her walls with antique paintings. Priti has designed the guest room with a touch of Goanese style. She has put a single bed found in Goa and decorated it with a canopy and adorned the plain blue-painted walls with a framed antique sequinned odhni made by her mother. She draped the cupboard with embroidered aqua silk. 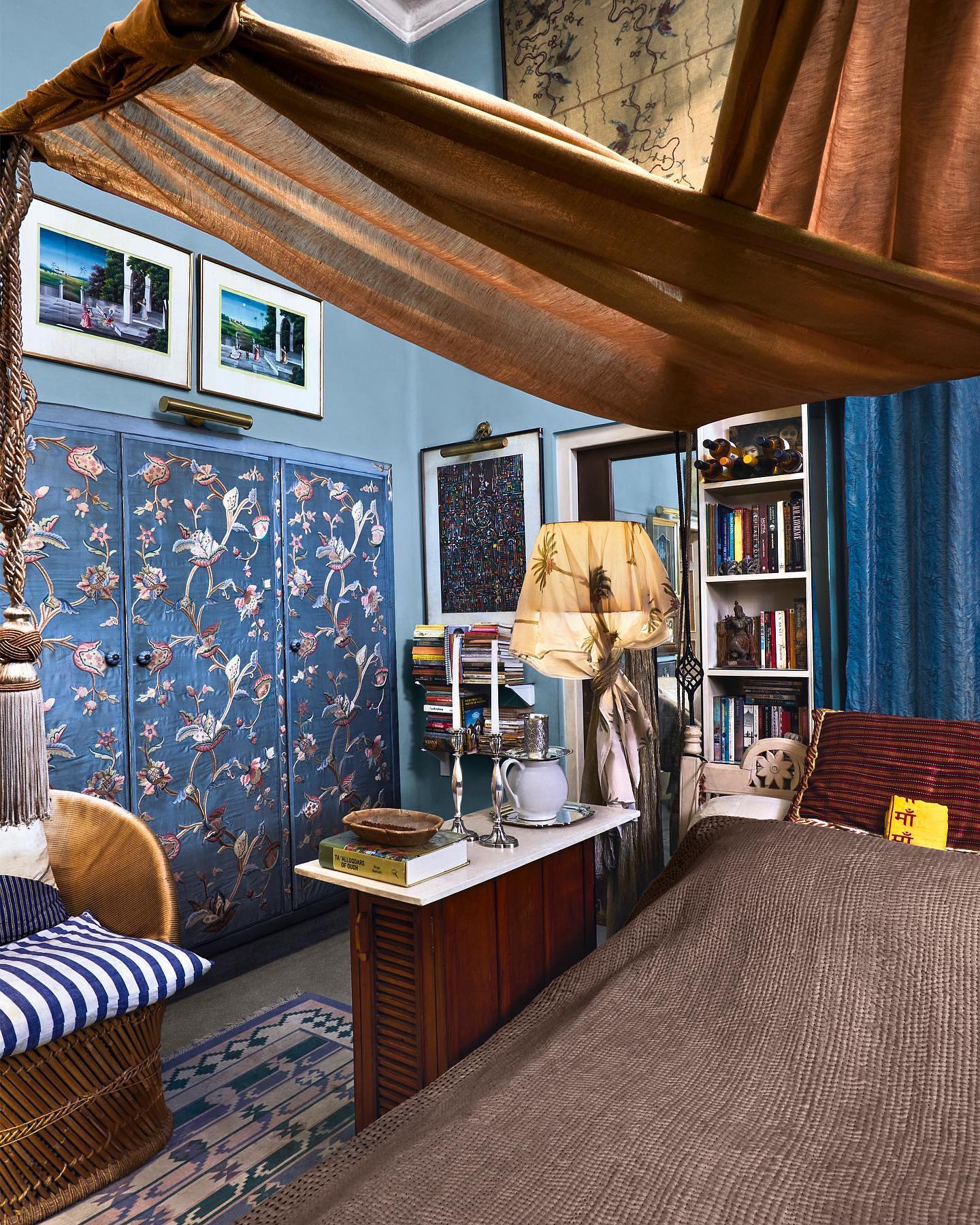 Priti Pratap Singh's mother used to make 'yards of dyed bandhni and leheriya fabrics', and from her, she got her sense in textiles and started her own cottage industry with out-of-work village artisans. She has surely created a regal house where she displays the art of her family, her own handiwork and other antique pieces. 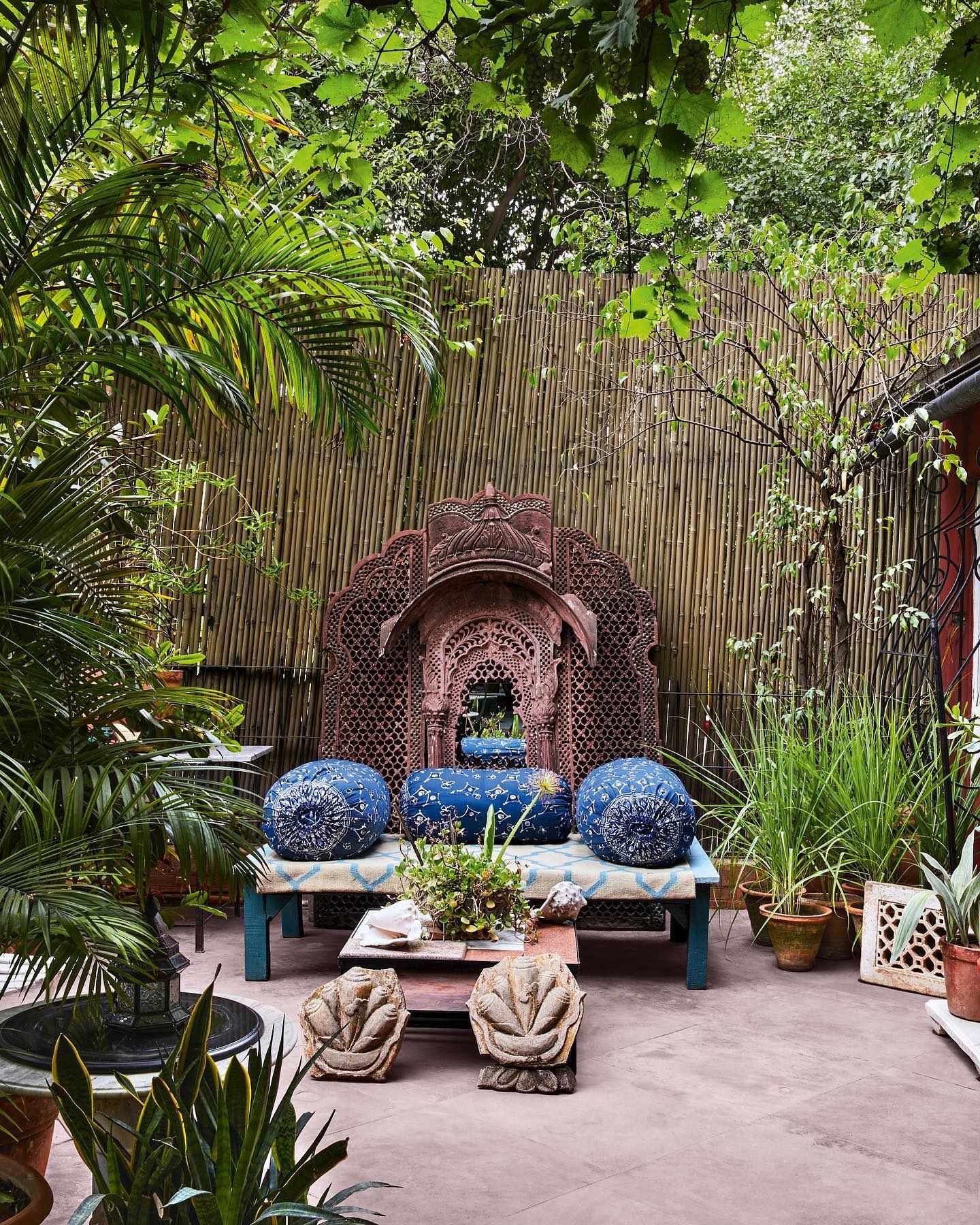 Priti created a maharani platform in the middle of her patio, which is made of sandstone and decorated with silk cushions. She placed it on top of the sandstone-flagged terrace. In front of the seater, there are Himalayan stone-carved Ganesh idols. 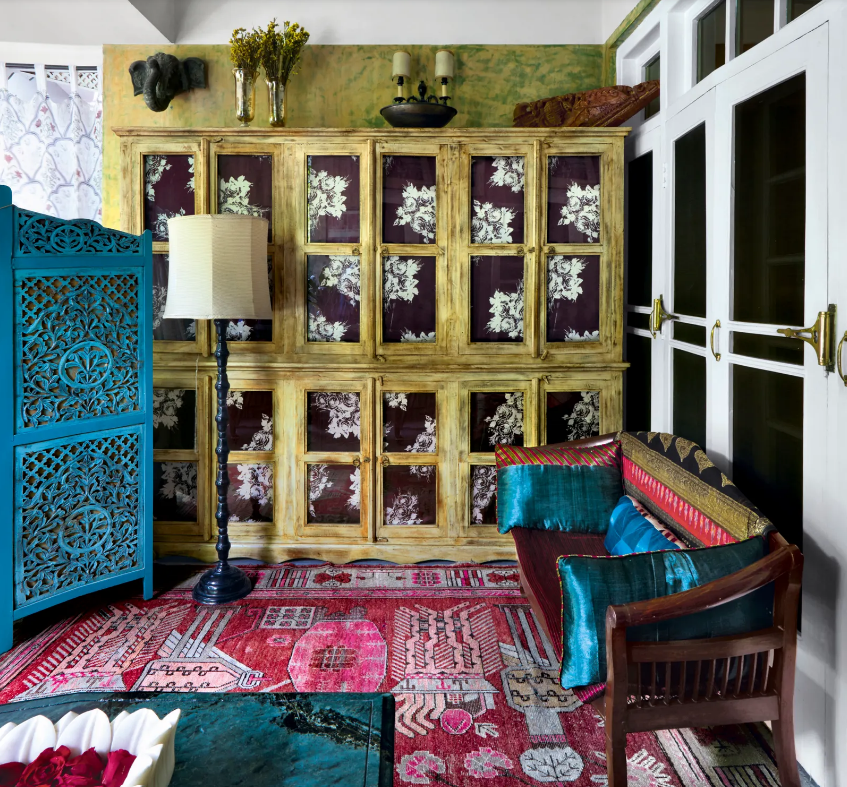 On the other hand, for the veranda, she had opted to flaunt her textile detailing as she covered the old cupboard with printed satin and placed a wooden bench along with a screen painted in turquoise colour. 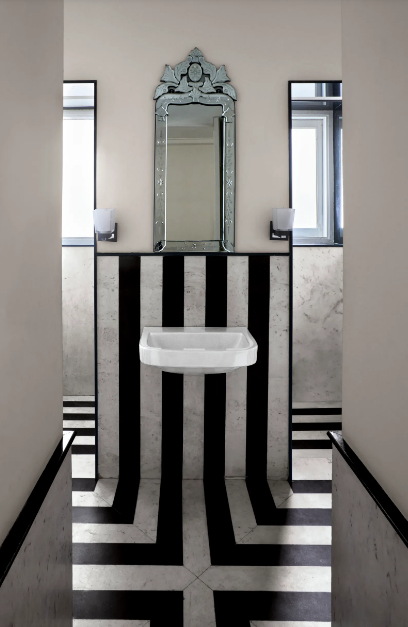 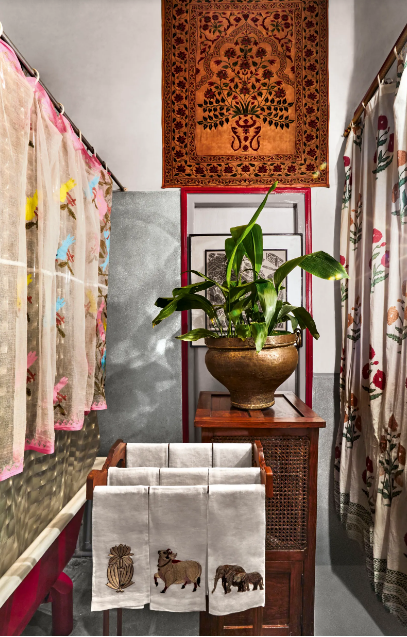 Priti used her extensive creativity while designing her bathroom. She used dramatic black and white stripe marbles for the wall and the floor to create an illusionary effect and had put a Belgian crystal mirror above the washbasin. On the other part, she induced textile detailing and embellished her bathroom with copies of Mughal textiles.

She has neatly secured her two vanishing worlds of Rajathasni royalness and Lucknowi fabric style and added a charm of Goanese vibe into her dream house. What do you think?