Former Indian Cricketer, Sourav Ganguly lives in a palatial abode, where his family had spent more than 65 years. Check out as we give you a sneak peek into his home!

Former Team India skipper and current BCCI head, Sourav Ganguly belongs to a simple and conservative Bengali family. Though he had got retired from international cricket in 2008, he kept himself connected to cricket by donning hats as a cricket administrator, commentator, analyst, show host, and much more. Ganguly is still one of the most respected and admirable figures in the world of cricket and his contribution to Indian cricket is commendable.

Also known as the 'Prince of Kolkata', Sourav Ganguly is adored by millions of cricket lovers across the world. Born in one of the most affluent families of Kolkata, Sourav has spent the past 49 years of his life in his ancestral home in the City of Joy. The 'Maharaja of Cricket' shares his extraordinary Kolkata home with three generations of the Ganguly family, and it has been no less than a peaceful haven for him.

Located on the Biren Roy Road in Behala, Sourav Ganguly's palatial abode is of the biggest and grandest private mansions in Kolkata. The former cricketer lives with his wife, Dona Roy, their daughter, Sana Ganguly and his extended joint family. It has been six-and-half decades since the Ganguly family has lived in the luxurious home, which is filled with a lot of memories. The cricketer's home is no less than a palace, featuring sprawling lawns, pristine white corridors, vintage interiors and beautiful decor. Though it is hard to estimate the actual cost of the property, looking at the huge building with its sprawling lawns and lush interiors, one can say that Sourav Ganguly's house would cost several tens of crores.

Sourav Ganguly had given a sneak peek into his palatial abode on the show, Asian Paints, Home Is Where The Heart Is. The former cricketer grew up in the house, where his family has been living for the past 65 years. From taking his nascent steps as a cricketer to practising with his brother, Snehasish under the watchful eyes of their father, Chandidas, the former cricketer had spent some of the most cherished moments of his life in the house. 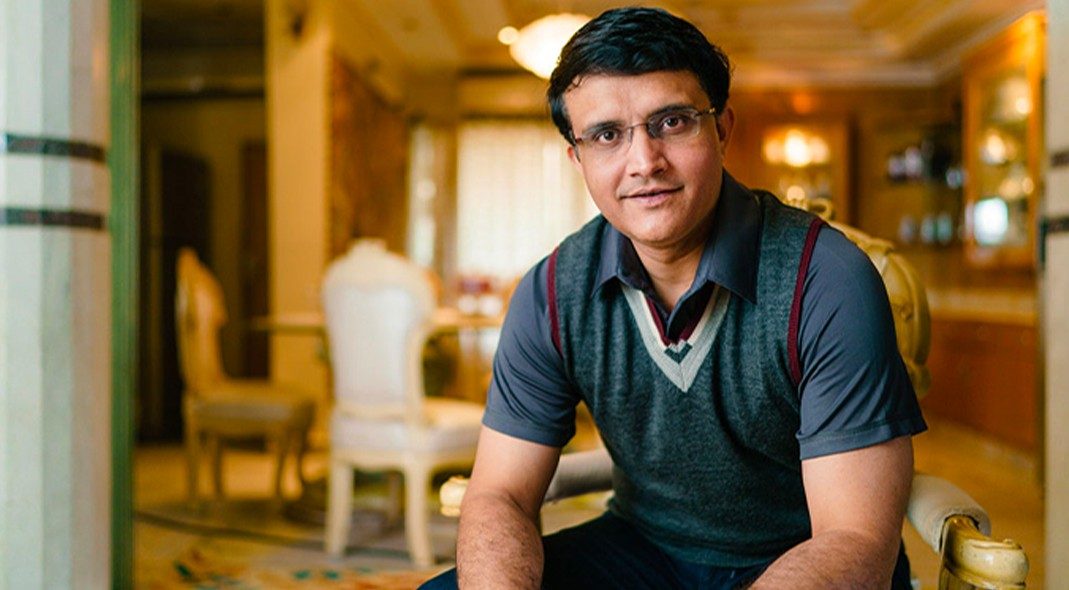 Despite the riches and globe-trotting, his house is the place where he gets immense happiness and peace with his favourite people around. The former skipper had spoken about a feeling of comfort, which he instantly experiences while entering the gates of his massive mansion. He had also explained what makes a home a home and had said:

"This is where I have spent 44 years of my life. it's a comfort feeling when you enter this arena; as you enter the gate and walk down the driveway and up into your room. It's a relaxing and comfort feeling and most importantly, it's also the people who are at home which make a home a home."

The living area at the Ganguly home is the place where the family spends most of their time and watches cricket. It features a large TV mounted on the wall, and it gives clear view from all the corners of the area. The area has cream-coloured leather sofas, a centre table and a grey and white-hued carpet. The walls of the room are pristine white and other light shades. However, the wall behind the sofa adds a pop of colour to the overall area. The vintage decor, antique ceiling and pillar design make the area classy.

The former Indian skipper had expressed his love and preference for lighter shades and neutral hues and had revealed that his mom prefers to keep the interiors white. However, he had also mentioned that it is hard to maintain white interiors, considering the dusty conditions in India. In his words:

"My mother has a preference for white, although it is hard to maintain, with the dusty conditions in India. Nevertheless, I too prefer lighter shades and not flashy blue or red hues, since lighter textures convey a message of harmony and peace throughout the property."

Showing around the area, Sourav Ganguly had shared that he loves to watch cricket and tries to stay connected to the game. He had also mentioned that he has spent some of the memorable moments of his life in this area and had played indoor cricket. Recalling his childhood days, Sourav had said:

"Well, this is the living area where we spend a lot of time and when you watch the TV at the back. This is where we watch a lot of cricket. I am still involved with the game, I may not be playing, you don't play forever but you still remain involved in the game. Many moments of life was in this room."

Next to the living room is the dining area, which is also a spacious zone. It has a massive dining table with a glass top and a mermaid-shaped bottom, which is surrounded by some wooden chairs. The large windows opposite the dining table keep the area well-lit and makes it look more spacious. The large vase placed adjacent to the windows adds to the beauty of the overall area.

The light colours of the walls add a sense of harmony. Moreover, being a Bengali family, the Gangulys love to host people for dinners and lunches. On the same dining table, Ganguly's mother had hosted several cricketers and celebrities, including the likes of Rahul Dravid, Sachin Tendulkar and VVS Laxman, Aamir Khan, among many others.

The Ganguly house has a sprawling garden and scenic lawns, where the cricketer goes for his morning walks. The mansion also has practice pitches, where Sourav, along with his brother and other family members relives the old memories of his younger days. Moreover, the pathway leading to the palatial abode has red and white patterns made with concrete.

A room full of memories

Ganguly's home also features a spectacular room, which is filled with prizes, trophies and other memorabilia. Interestingly, the room was originally created by Sourav's father, late Chandidas, who himself was a renowned cricketer. One of the walls of the room has a photograph of the former cricketer in a bowling action. Dada's mother believes that his father was a better player than the skipper himself.

In one of the segment of the video, Sourav had shown another famous photograph of himself, where he could be seen holding the Ranji Trophy with his elder brother, Snehashish Ganguly, for Bengal. The picture was from his younger days, and one glimpse of it was enough to make us feel nostalgic. The cricketer had also showcased his cricketing gear and other equipment.

One look at the room, and one can guess how much Sourav loves and respects cricket. Even after years of his father's demise, the cricketer has maintained the aura of the room and has kept it pretty well. Sourav's memory room is no less than a treasure trove for all the cricket fans, who love the cricketer.

The cricketer also has a lavish guest room in his house, which features artistically designed sofas and a center table. The majestic sofas offer a feeling of opulence and add an oomph factor to the overall area. The spacious room receives a lot of sunlight during the day, and it remains well-lit. Moreover, it has a beautiful chandelier hanging from the ceiling and some unique decor pieces kept on the side table.

The balcony at Sourav Ganguly's place is as big as a room in a 2BHK apartment in the suburbs of Kolkata. It is filled with lots of plants and small herbs, which add a pop of green colour to the minimalistic balcony. With ample space and a white railing, the area offers a refreshing feeling to the cricketer after a hectic day. The cricketer loves to spend time in this area and enjoys a clear view of the sky and the city.

Sourav Ganguly's home has beautiful corners and a relaxing ambience. However, the cricketer's favourite spot is the one, where he begins his day with a cup of morning tea. Being associated with the world of cricket, Sourav prefers to keep himself updated with the sports news and begins his day by reading the newspaper at his favourite spot. The area features a bright green couch, a white side table, and some photo frames on the wall.