Raghu's little bundle of joy, Rhythm's expressions at meeting his father's twin is relatable and hilarious. Scroll down for more details! 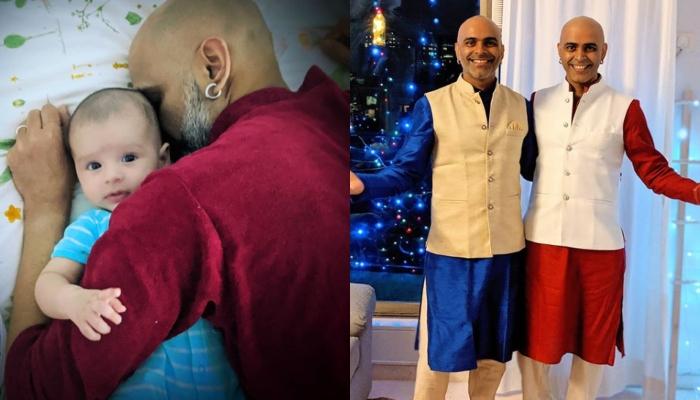 January 10, 2020,  was the day when Raghu Ram and his wife, Natalie Di Luccio had announced the arrival of a 'junior Raghu' in their lives! They had shared the joy of the arrival of the apple of their eyes and the prince of their clan with their fans on their respective Instagram handles. They had shared cute pictures with their son and had even shared his unique name, Rhythm with their fans. Now, after almost 5 months, Raghu introduced baby Rhythm to his twin brother, Rajiv and his expressions were priceless! (Recommended Read: Hardik Pandya's Special Gift To His 'Rose' Natasa Stankovic, Is An 'Always And Forever' Kind Of Love)

Raghu Ram took to his Instagram handle to share with his fans the priceless moment when his little baby boy, Rhythm met with his father's twin brother, Rajiv Lakshman. Baby Rhythm had the same confusing expression upon meeting Raghu and Rajiv together, as we had when we had seen the twins for the first time on TV. And the quirky, fun captions that Raghu put alongside them are so hilarious, we are practically ROFLing while writing this. Scroll down to know how did baby Rhythm reacted on meeting his father's twin brother!

MTV fame, Raghu Ram took to his Instagram handle on June 19, 2020, and shared some clicks from when 'junior Raghu' met Rajiv. Raghu's baby boy, Rhythms' funny and confused expressions on meeting his father's twin are too hilarious. Raghu shared two pictures and one boomerang video on his IG handle. In the first picture, baby Rhythm is sitting in his father's lap and looking intently at Rajiv, as if trying to figure out who he is. Raghu captioned the picture as "When #BabyRhythm met @rajivlakshman! The expression is priceless! "Haila! Ye kaun?!" #Twinstagram #Twins." The second picture sees baby Rhythm sitting between Raghu and Rajiv looking utterly confused as to who is whom! Raghu put a quirky caption alongside the picture which can be read as "MOMMYYY!!! What did you mix in the milk? I've started seeing DOUBLE!" #BabyRhythm meets @rajivlakshman #Twins #Twinning #Twinstagram." The third post is a boomerang wherein we can see Raghu and Rajiv holding baby Rhythm turn by turn. Raghu captioned it as "Giving the little one something to talk to the therapist about, later in life #BabyRhytm meets @rajivlakshman #Twinstagram #Twins." Check out the hilarious pictures below:

Raghu had given the first glimpse of his precious little bundle of joy, Rhythm on April 20, 2020. He had taken to his Instagram handle and had shared a series of pictures with his three-month-old baby boy. In one of the picture, Raghu could be seen carrying his little boy on his shoulders and the father-son duo had looked super adorable. Along with it, the actor had written a cute poem that can be read as "Teri chhoti si duniya mein, Sabse badaa tera Papa. Teri har museebat ke aage khada tera Papa. Teri nanhi si mutthi mein samaa jaaye tera Papa. Tu roye toh tu hi bataa Kahaan jaaye tera Papa? Meet the apple of our eye. The tune of our song. The Rhythm of our life." (Also Read: Late Chiranjeevi Sarja's Wife, Meghana Raj's Heartbreaking Note, 'I See The Door But You Don't Come')

Raghu's wife, Natalie had also shared a cute picture with baby Rhythm on her Instagram handle. Along with it, she had written a sweet note that could be read as "Till just a few months ago, it seemed unbelievable to me that I could carry a life inside me. But meeting baby Rhythm was proof that it can happen and I STILL can’t believe it! I’d like you to all to meet him too. Here’s our little Rhythm… proof that my heart can beat outside my body." (You May Also Like: Anam Mirza's Hubby, Mohammad Asaduddin Treats Her With A Delicious Meal, Proud Wife Shares A Glimpse)

Would you (as a kid) be confused if you met your father's twin?