Anam Mirza had given a glimpse of her hubby, Mohammad Asaduddin cooking in the kitchen. Anam shared the video on her IG story and wrote, "My cheerleader @asad_ab18" followed by heart emojis. 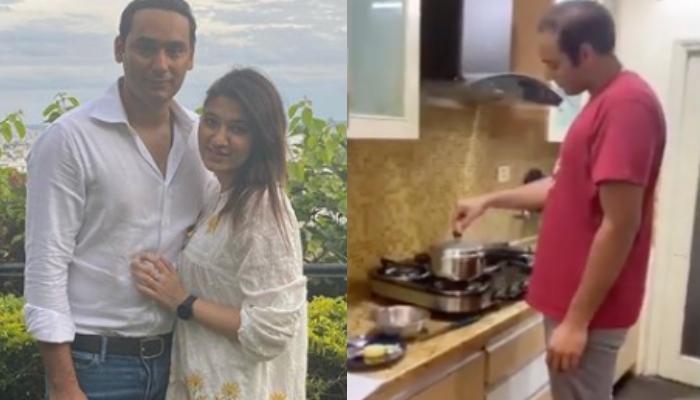 Since decades, the roles of a man and a woman have been divided by the patriarchy. While a woman is expected to be a homemaker, a man plays the role of a breadwinner. But with the evolution of time and modernisation, men and women have together taken steps towards achieving gender equality. Due to the pandemic, every household is forced to do their chores on their own, in the absence of house helps. And the best thing that had happened is men and women have divided the responsibilities equally and we can see Ki & Ka in real-life, not only for common people but celebs too. (Also Read: Mira Kapoor Posts An Unseen Picture With Her Girl Gang, Her Lehenga Is A Perfect Summer Wedding Pick)

After Shahid Kapoor stepping in the kitchen to cook for his wife, Mira Rajput Kapoor for the first time in five years, Samantha Akkineni learning to cook for her hubby, Naga Chaitanya, Kunal Kemmu helping his wife, Soha Ali Khan in peeling peas; Sania Mirza's sister, Anam Mirza's hubby, Mohammad Asaduddin steps into the kitchen to treat his wife with a delicious meal. It was in December 2019 when Anam had settled for forever with her happy space, Asad, son of Mohammad Azharuddin (Indian cricket team's former captain). Since then, Anam and Asad have been delighting their fans with beautiful glimpses into their happily ever after.

While it is always believed that the way to a man's heart is through his stomach, but women won’t mind it happening otherwise too. Right? A few hours ago, Anam Mirza had given a glimpse of her hubby, Mohammad Asaduddin cooking in the kitchen. Anam shared a post of C.I.Y - Cook It Yourself, who had posted a video of Asad cooking and captioned it, "Asad is not only great on the cricket field, but thanks to CIY, he is now amazing in the kitchen too!" Anam shared the video on her IG story and wrote, "My cheerleader @asad_ab18" followed by heart emojis.

While a lot of celebs have interacted with their fans via social media during the lockdown, Anam Mirza too, had indulged in an 'Ask Me Anything' session on Instagram and answered a lot of questions about her personal life. Beginning with how is married life treating her, Anam had replied, “Blessed, blessed and blessed. Alhamdulillah.” Revealing the nickname of her husband, Anam had shared a screenshot of his contact name in her phone which could be read as ‘Assu’ and she had written, “Hahaha he hates it” atop it. When asked if Asad speaks Hyderabadi, she had retorted, “Asad bhai eats, speaks and breathes Hyderabadi.” Crediting her sister for inspiring her to stay positive amidst so much negativity on social media, Anam had posted a ‘Positivi-Tea’ sticker and had written, “Got it from ma sistaaaa.” (Also Read: Sania Mirza's Baby Boy, Izhaan Mirza Malik Teaches His 'Khaala', Anam Mirza 'How To Take Baby Steps')

On May 25, 2020, Anam Mirza had celebrated her first Eid post-wedding with hubby, Mohammad Asaduddin, her father-in-law, her sister, Sania Mirza and her nephew, Izhaan Mirza Malik. To wish fans on Eid, Anam had posted a picture of her tightest hug to Asad and over-excitedly captioned it as “Giving each other extremely over-excited eid hugs cause we can't hug anyone else. our first eid together, hoping you're all home, safe and grateful. Eid Mubarak from us #Eid #EidMubarak” followed by a heart emoticon. Sharing one with Sania and Izhaan, Anam had written, "Ain't no Eid without you two. #Eid2020."

In December 2019, the Mirza and Azharuddin clans had concluded the newly-weds, Anam Mirza and Asad Azharuddin’s wedding celebrations with a cricket match followed by an after-party. Anam and Asad's families and friends had come together for a cricket match, which was team dulha v/s team dulhan. The cricket match was anchored by Anam’s father, Imran Mirza and Bollywood director, Farah Khan. Here's a picture of Sania with dulha, Asad and dulhan, Anam from the match:

Anam Mirza and Mohammad Asaduddin had said ‘Qubool Hai’ in a traditional Hyderabadi nikaah ceremony in Hyderabad. But do you know how Anam and Asad decided on forever? Anam and Asad’s families have known each other for over three decades but it was years later when with the support from their parents and a little nudge from old friends, the lovebirds embarked on their ‘happily ever after’ journey. In an interview with the Vogue, Anam had thrown some light on her love story and wedding with Asad. Before Anam, who owns an ad agency and an events company, had started dating Asad, a cricketer and a real estate developer, their respective families had fallen in love with them. Anam had elaborated, “Before we even officially started dating, we happened to meet each other’s parents. My folks instantly fell in love with Asad, and same was the case with his family. It’s ironic; everyone around us always knew that we would make the perfect couple. And it turned out to be true. After just a month of getting to know each other, we were sure we wanted to get married.” (Also Read: Rhea Chakraborty Admits Wedding With Sushant Singh Rajput In 2020 In Her 9-Hour Police Interrogation)

Much love to Anam and Asad!