Puja Banerjee shared pictures from her wedding with Kunal Verma on her IG handle and her son, Krishiv stole the show.

Puja Banerjee and Kunal Verma were trying to tie the knot since 2017 after their engagement, but first, their work commitments and then the pandemic had ruined their plans. Puja and Kunal had a court marriage in February 2020, and later, they had embraced parenthood on October 9, 2020, after welcoming a baby boy, Krishiv Verma. The couple finally tied the knot traditionally on November 15, 2021, and their son, Krishiv stole the show at their wedding.

Kunal Verma had officially announced their wedding on November 16, 2020, on his Instagram handle. He had shared a surreal picture with his wife, Puja Banerjee, twinning-in-pink with her. Puja was seen wearing her shankha and pola, which are the bangles worn by Bengali married women. He had captioned the picture as:

Puja Banerjee Enters The 'Mandap' In A 'Palki', Kunal Verma Rides The 'Ghodi' In A Green 'Sherwani'

Inside Puja Banerjee And Kunal Verma's 'Mehendi' Night: Their Son, Krishiv Twinned With His Mommy

Puja Banerjee Heads To Goa With Her Son, Krishiv For Her Wedding, His Excitement Level Is Unmissable

Puja Banerjee's In-Laws Arrange A Sweet 'Griha Pravesh', She Gets A Warm Welcome In Her 'Sasural'

Puja Banerjee's Son, Krishiv Turns 1, She Posts An Emotional Video Of Meeting Him For The First Time 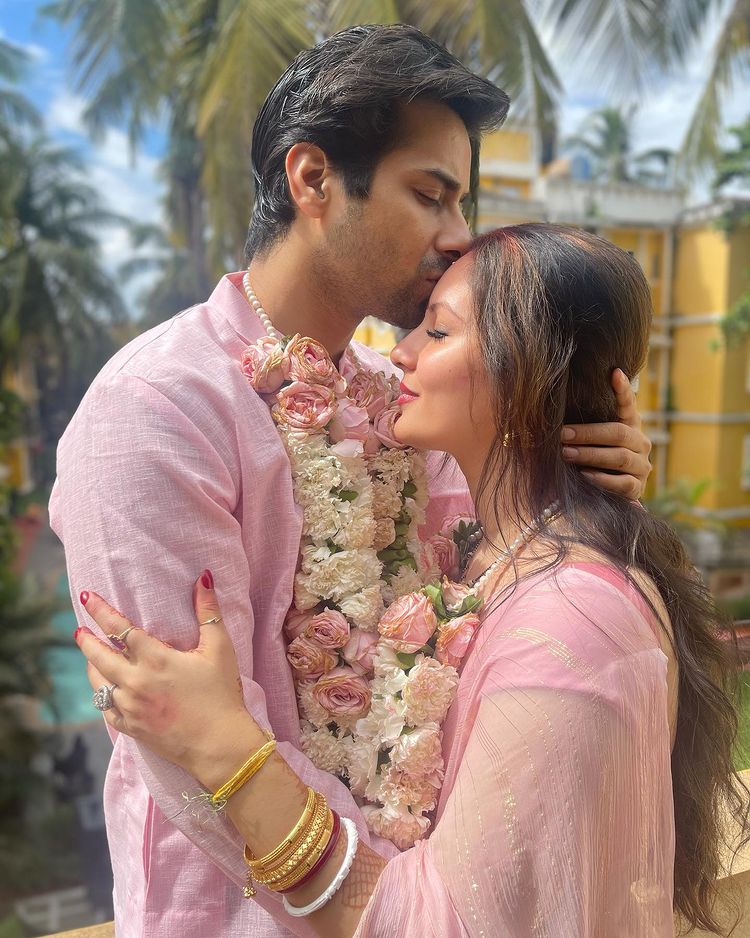 On November 18, 2021, Puja Banerjee shared a series of pictures on her IG handle from her wedding with Kunal Verma. For the wedding, while Puja wore a red Bengali saree with golden work on it and completed her look with a golden nath, matha patti, shankha-pola and white mukut, Kunal, on the other hand, wore a red Bengali kurta with a mukut. However, it was their son, Krishiv, who stole the show as he wore a white and red Bengali style kurta with dhoti. Sharing the pictures, Puja wrote, “Ho gayi hamare phere wali shaadi,” and “Mere tum @kunalrverma.” 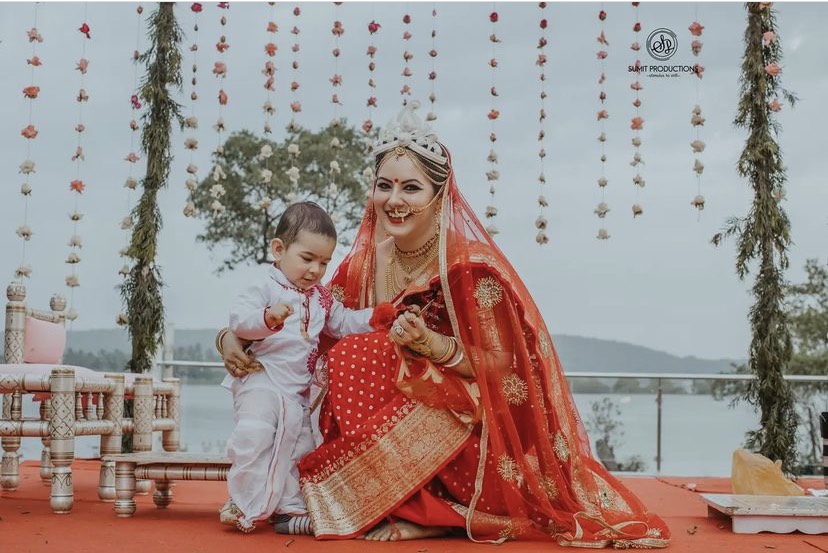 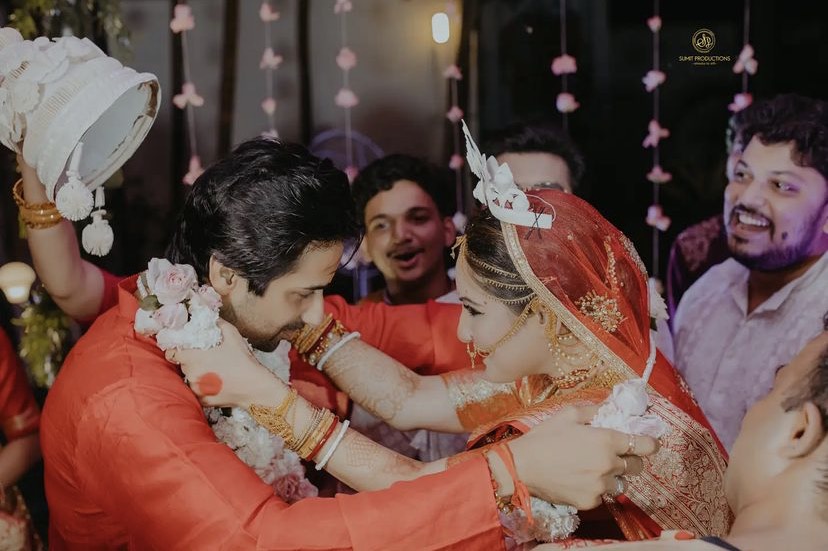 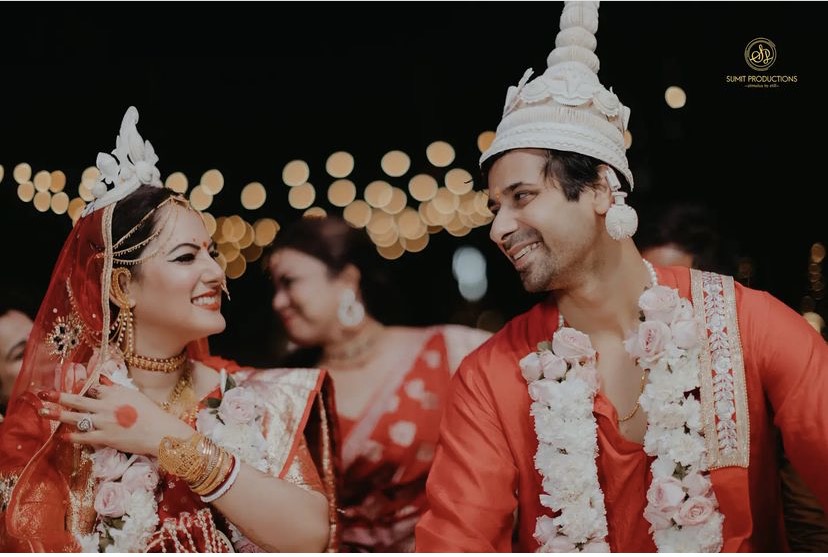 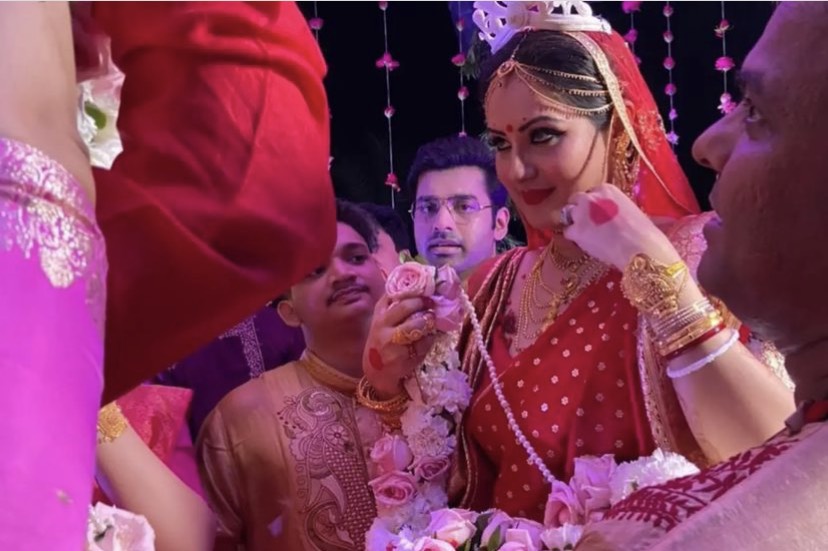 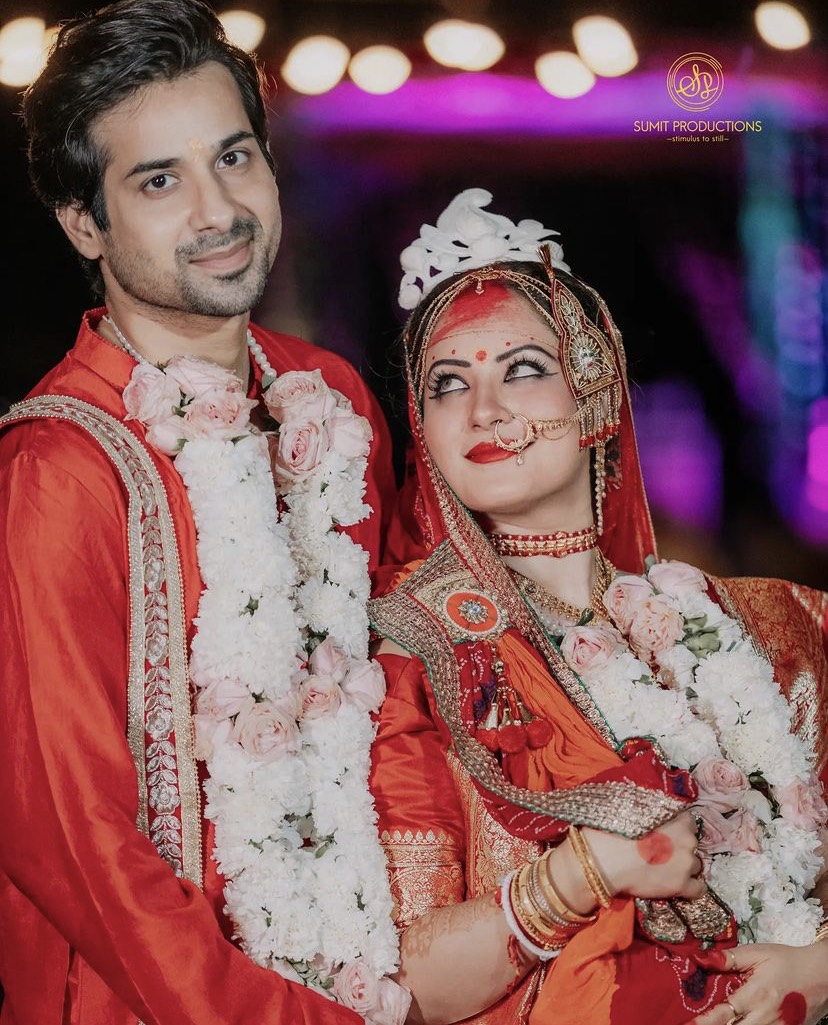 A few hours back, Puja had taken to her Instagram handle to share a video from her griha pravesh ceremony. She had looked alluring in a peach-coloured saree and had her wedding veil pinned on her head. As the newlyweds are back in Mumbai, we could see her sister-in-law and elders of the family giving her a warm welcome. She had captioned the video as:

''Thank u nanand @s_m2282 for this lovely swagat and all my sasumaas and sima didi.''

Recommended Read: Preity Zinta Becomes A Mother, Announces The Birth Of Her Twins, Reveals The Names Of Her Kids

On November 17, 2021, Puja had shared an emotional video on her IG handle, from her vidaai as she was seen performing the heartbreaking ritual of Kanakanjali. It is a Bengali ritual in which the bride has to take a handful of rice and throw it back into her mother's aanchal before leaving for her sasural. For her vidaai, Puja had worn a peach saree with golden foil print over it. She had channelised her inner Bengali married lady by flaunting her mangalsutra, a big red bindi, and shankha-pola. Alongside the video, she had written:

Since their wedding, Puja and Kunal have been delighting their fans with snippets from the same. On November 16, 2021, the actress had taken to her Instagram handle to share two pictures as a newly married bride. In the photo, we could see Puja wearing a pastel pink-hued chiffon saree which she had paired with a matching cap-sleeved blouse. She had gone sans makeup and had worn a red-coloured bindi and a unique mangalsutra. 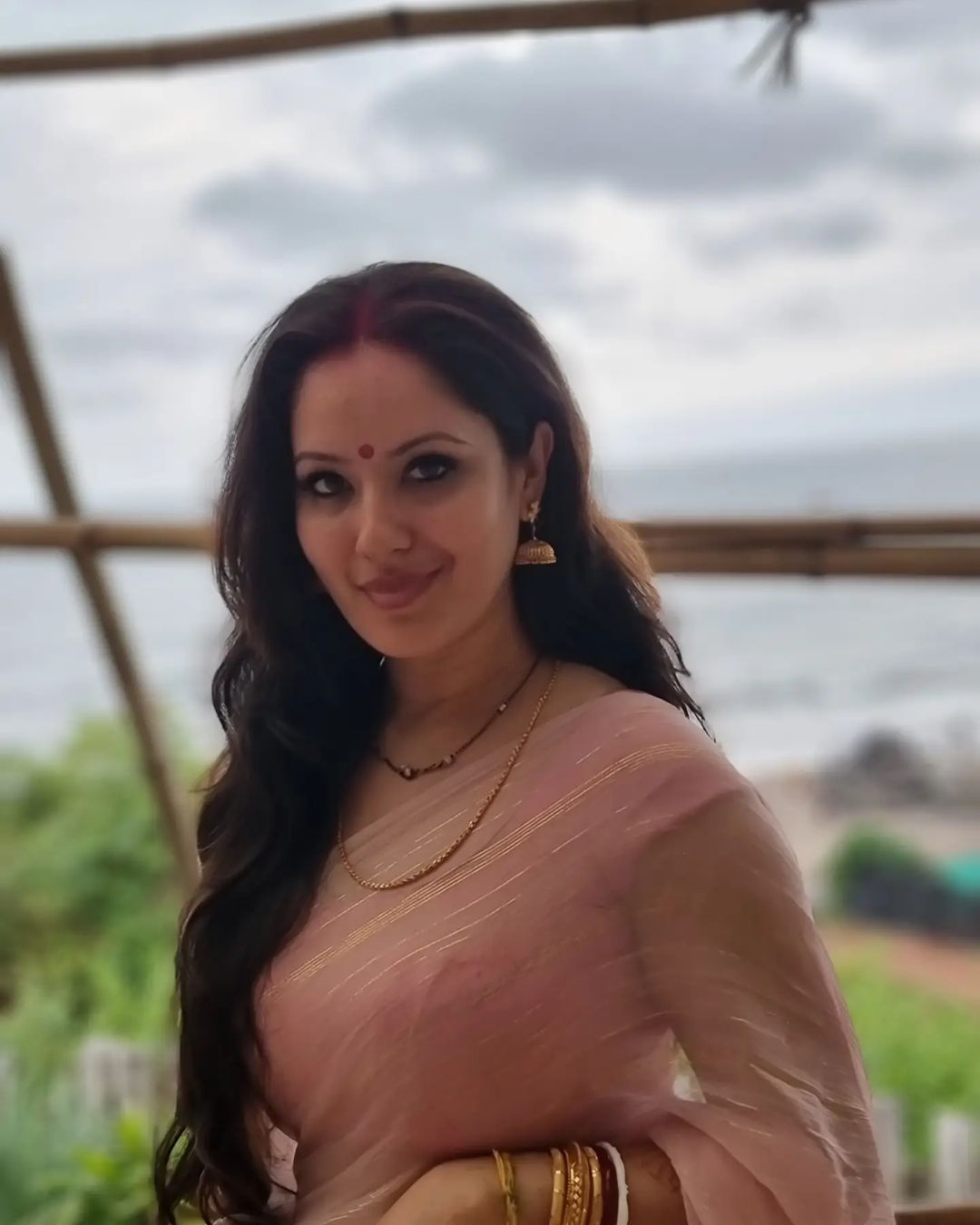 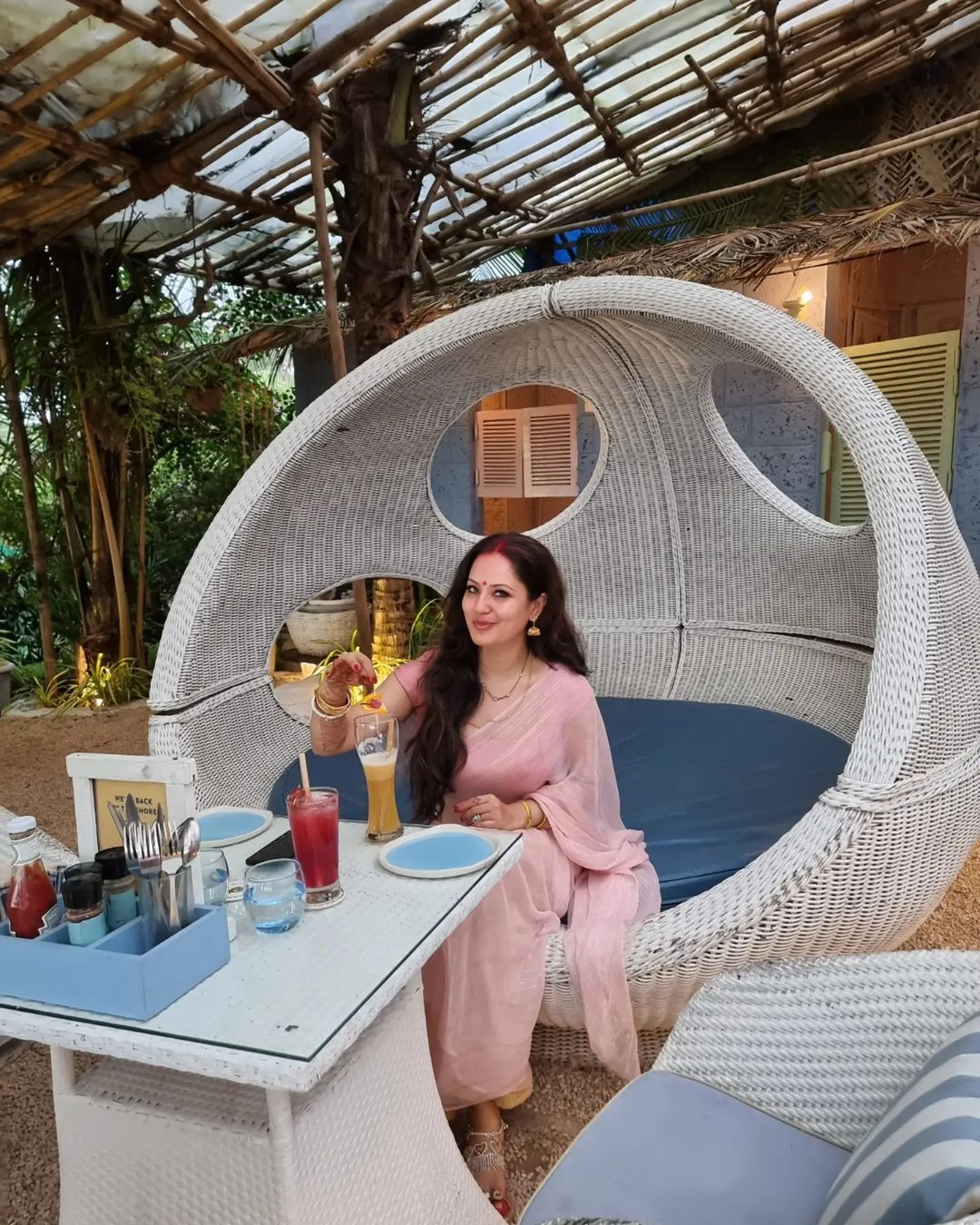 We are in love with Krishiv’s outfit for his parents’ wedding!

Puja Banerjee Enters The 'Mandap' In A 'Palki', Kunal Verma Rides The 'Ghodi' In A Green 'Sherwani'

Inside Puja Banerjee And Kunal Verma's 'Mehendi' Night: Their Son, Krishiv Twinned With His Mommy