Priyanka Chopra Trolled For Having Fireworks At Her Wedding, Despite Supporting Cracker Free Diwali

Priyanka Chopra Trolled For Having Fireworks At Her Wedding, Despite Supporting Cracker Free Diwali 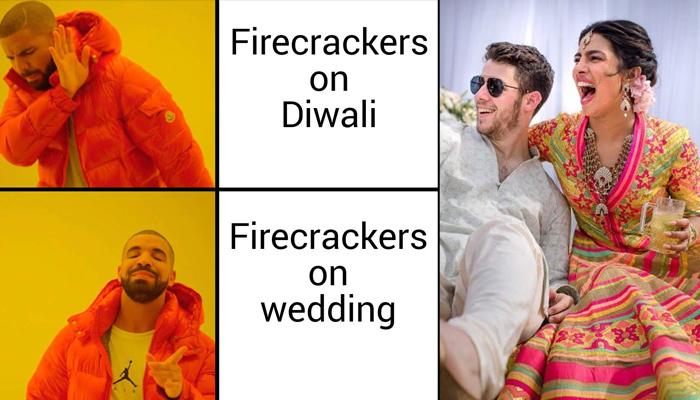 Priyanka Chopra and Nick Jonas exchanged wedding vows on December 1, 2018, in a Christian ceremony and took their saat pheres as per Hindu tradition on December 2, 2018. As per the reports, on December 2, 2018, Priyanka and Nick’s wedding functions started with a puja wherein the latter joined her for the mauli ceremony where a sacred thread is tied on the bride and groom’s wrists. Priyanka Chopra’s brother Siddharth Chopra explained the significance of each customs to the Jonas family. (Also Read: Priyanka Chopra's First Look Revealed From Her Wedding While Going Towards 'Mandap' With Bridesmaids)

At the noon, Priyanka’s haldi ceremony took place followed by her chooda ceremony, where her uncle gifted her 21 bangles which were bathed with milk and rose petals. The Hindu wedding ceremonies started at 6 PM with a Sehrabandi puja where a family member of the groom ties the turban. As per a guest, “A cheer went up among the guests as the bride and groom came face-to-face at the mandap. Priyanka teared up during the jaimala session.”

Shortly after Nick and Priyanka were pronounced husband and wife on December 1, 2018, the skies lit up with an extravagant display of fireworks. And the netizens trolled the actress for her 'hypocrisy' since she was the face of an anti-cracker campaign during Diwali. On Diwali, Priyanka urged people to not burn crackers and contribute in making the planet pollution free and now referring to the same campaign, she was criticised for bursting crackers at her wedding.

Some of the comments could be read as, “Bursting Crackers In Diwali Makes Priyanka Chopra Breathless, Bursting Crackers In Wedding Gives Her Fresh Air By Releasing Oxygen.”, “#PriyankaChopra If you want to give out a message to your fans to not burst crackers on Diwali bec it affects the environment, animals, asthma patients then the same rules apply to your wedding. It's important to practice what you preach!” Check out the screenshots here: 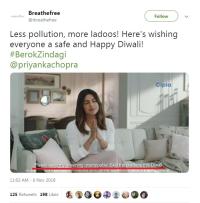 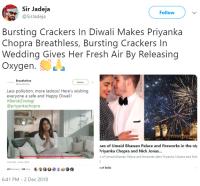 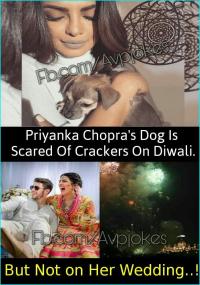 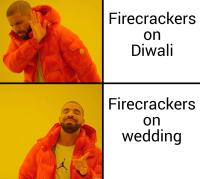 Before leaving for Jodhpur for her wedding with Nick, Priyanka was a part of the panellists at the Facebook event called Social For Good, where she spoke about how celebs are being targeted and have to go through trolls every now and then. PeeCee had stated, "Trollers have their own life. If they do negative comments, why not focus on the positive comments." Further adding, "These trolls have the nastiest things to say, but they won't say it in face." (Also Read: Priyanka Chopra's 'Saasu Maa', Denise Jonas' Wedding Gift To Her 'Bahu' Costs More Than 50 Lakh INR) 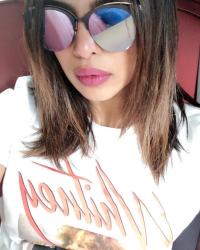 Priyanka Chopra’s bridesmaid, Parineeti Chopra revealed in one of her posts that how her Nick ‘jiju’ did the bridesmaid job for them by promising to take care and keep Priyanka happy for life. Parineeti’s caption could be read as, "THE MEHNDI. The job of us bridesmaids was to make sure the bride was happy and comfortable at all times. But we didn’t have to worry about it - coz Nick promised to do it all his life. Welcome to the family Nick jiju!! Im so so happy that the Jonas and Chopra family is now united!!!" 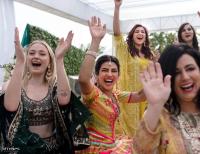 Parineeti, in another post, revealed how the Jonas clan stumped the Chopras with their sangeet performances. Parineeti shared a picture from the sangeet ceremony and wrote, “For our SANGEET, the Chopra family decided to depict Mimi didi and Nick’s love story though songs, scenes and skit - full Bollywood style!!! The whole family rehearsed for days and days. And were ready to beat the Jonas side hollow!!! But when the ladka wallas came on stage, they stumped us. They had been rehearsing for a long time. They sang and danced LIVE, including lip syncing hindi songs!!!!!! Damn, we should have known. All of this - but the spirit of competition was overpowered with love, happiness, laughs, whistles, cheering and noise!!! Wow wow wow. WHAT A NIGHT. P.S. We shared the trophy”. (Also Read: Priyanka Chopra And Nick Jonas Play 'Newlywed Game' Post Their Christian Wedding, Video Inside)

What do you think of Priyanka being trolled for bursting crackers at her own wedding, despite being the face of an anti-cracker campaign? Let us know in the comments section below.