One of the most-awaited festivals of married women, Karwa Chauth is all about adorning oneself in the best outfit with henna and bangles clad hands and celebrating the day of love. The festival is celebrated by a married woman and it speaks about the undying love of a wife for her husband. We have been scrolling throw mesmerising pictures of B-town celebs on our social media handles. And our Desi Girl, Priyanka Chopra has won our hearts as she kept the Karwa Chauth vrat for her videsi hubby, Nick Jonas. (Also Read: Kareena Kapoor Khan Steals The Show With Her Pregnancy Glow At Karwa Chauth Celebrations At Kapoors)

Before meeting at Met Gala 2017, Nick and Priyanka had met each other at the Vanity Fair Oscar’s after-party in 2017. It is said that at the end of the after-party, Nick and Priyanka were head-over-heels in love with each other. On December 1-2, 2018, the much-in-love couple had tied the knot according to Hindu as well as Christian rituals at Umaid Bhawan Palace. The duo had looked gorgeous in their wedding attires designed by Ralph Lauren and Sabyasachi Mukherjee. Nick and Priyanka's wedding was a grand affair and according to a report of Times Network’s India Economic Conclave, Nickyanka’s (as lovingly called by their fans) wedding had helped with the three months revenue of Umaid Bhawan Palace. 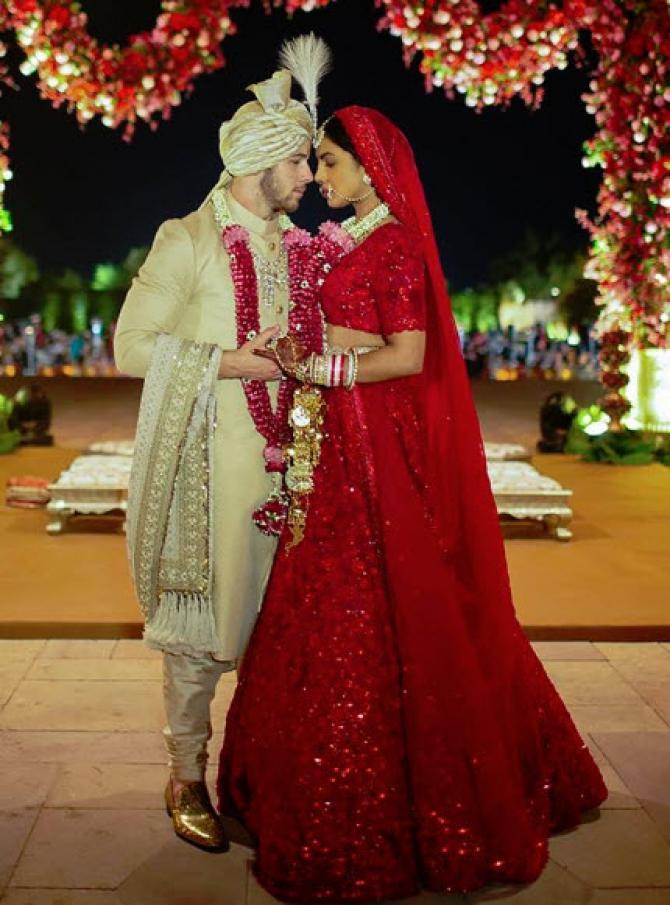 Priyanka Chopra celebrated her second Karwa Chauth with hubby, Nick Jonas. She took to her IG handle and shared mesmerising pictures from the same. Priyanka looked like a vision in a red saree with a beige-coloures noodle strap blouse. She accentuated her look with matching jewellery, red bindi, lipstick and sindoor. In the first picture, Priyanka was seen with a thaal in her hand and in the second picture, the stunning actress posed romantically with Nick. Along with the pictures, Priyanka wrote, "Happy Karwa Chauth to everyone celebrating. I love you @nickjonas." 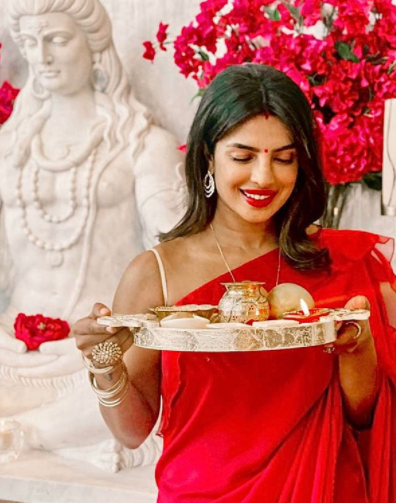 Last year, Priyanka had celebrated her first Karwa Chauth. She had looked splendid in a red saree with matching red bangles, sindoor, bindi and red lipstick. She had looked every bit of an Indian bahu in her desi avatar. She had taken to her IG handle and had written, “Karwa Chauth at a @jonasbrothers concert. Definitely a first I’ll always remember! @nickjonas #karwachauth.” (Also Read: Divyanka Tripathi Calls Her 'Karwa Chauth' Outfit, 'Extra Aadmi', Hubby Vivek Dahiya Makes Fun Of It) Nick had also posted pictures of his beautiful wife celebrating her first Karwa Chauth. He had donned a cream-coloured kurta matching with his wife's traditional attire and had looked like a pure desi munda. Along with the pictures, he had written, “My wife is Indian. She is Hindu, and she is incredible in every way. She has taught me so much about her culture and religion. I love and admire her so much, and as you can see we have fun together. Happy Karva Chauth to everyone!” Nick wears his heart on his sleeves for Priyanka and he had not only adapted to the Indian culture and tradition but is also rocking it. In an interview with Today magazine, Nick had revealed his favourite Indian cuisine. When he was asked about his favourite Indian dish, pat came the reply, “Paneer…it’s the best." When further probed whether he likes samosa, he had said, “I do.. but am more of a paneer guy.” The Sucker singer had also revealed that he doesn’t cook at all but when it comes to ordering Indian food, he nails it. In an interview with the Harper Bazaar, Priyanka had talked about the reason behind dating Nick. She had revealed that it was his music video, Close, which had made her fall in love with him. Talking about the same, she had said, "My life has always been pretty musical, and now with Nick, it's completely musical. I decided to date him after seeing the video for 'Close,' where his shirt comes off. So that song is my favourite." (Also Read: Arpita Khan Looks Like A Princess In Red For Karwa Chauth, Breaks Fast By Looking At Her 'Chaand') Isn’t Priyanka looking gorgeous? What do you think? Let us know. What’s love if you don’t rub off your personality traits on your partner or your better-half doesn’t grasp your qualities! Priyanka Chopra Jonas surely has spread her desi aura on her LA-based in-laws as she is often seen performing puja at her home at various Indian festivals. Most of all,