When it comes to making fashion statements, Priyanka Chopra always looks like a million bucks. Surprisingly, her outfits also cost that much. Check out!

Global icon, Priyanka Chopra Jonas is a diva, who dominates the glamour world with her stellar performances in movies, and her fashion statements. Be it her philanthropist activities or her confident aura, Pee Cee definitely knows how to steal the limelight. In 2018, the diva had got married to the love of her life, popular Hollywood singer, Nick Jonas, in a lavish wedding at Umaid Bhawan Palace, Udaipur. And ever since they have tied the knot, Nick and Priyanka never miss an opportunity to serve major goals.

Priyanka Chopra Jonas enjoys a massive fanbase all over the globe. With her sartorial fashion choices and designer dresses, the actress never fails to win hearts and impress the fashion police. Time and again, she has proved that she is a bold lady, and can carry any outfit with confidence. The actress has perfectly managed her wardrobe choices with a trans-continental schedule and her fail-safe picks are to die for! Over the years, Pee Cee has worn some very expensive ensembles and has turned heads with their prices!

Priyanka Chopra Jonas Looks Gorgeous As Ever In A Green Pencil Dress Worth Rs. 50,000 The Desi Girl of B-town is always the talk of the town. The Baywatch star is well-known for her confidence, bold nature, and sizzling looks. Priyanka Chopra is, in fact, famous for her beauty with brains not just in India but all over the world. For her Grammy’s 2020 outfit, she had worn an elegant ivory gown with a plunging neckline that had extended just below her navel. The actress had looked stunning, and people couldn’t take their eyes off her. However, this outfit featuring kaftan sleeves was no cheap deal. As per the reports, the gown was priced at 78,200 pounds, which roughly converts to Rs. 77 lakhs. For one of the Wimbledon matches, Priyanka had opted for a snake printed co-ord set, including shirt and trousers. She had left her hair open and had accessorized it with sleek gold chains and a brown tote. She had kept her makeup subtle. Priyanka had not just looked like million dollars, but her outfit was worth lakhs. Priyanka’s crepe trousers and shirt were from the brand, Ralph Lauren. While the trousers had cost $ 1,990, which converts to Rs. 1,47,905 approximately, her shirt had cost Euro 1,390, which converts to Rs. 1,21,982 approximately. The total cost of Priyanka’s outfit comes around Rs. 2,69,897. Priyanka Chopra had appeared like a perfect desi bride for her big fat Indian wedding. Her stunning red bridal lehenga was a royal and a grand pick. The glittering red lehenga was designed by the ace designer, Sabyasachi Mukherjee, and had adornments made of hand-cut organza flowers, French knots in silk floss, and Siam-red crystals. The actress had looked stunning in her crimson red wedding ensemble and had set a new trend. Reportedly, PeeCee's wedding lehenga had cost a whopping amount of Rs.18 lakhs approximately. Once, Priyanka Chopra was spotted walking hand-in-hand with her hubby, Nick Jonas, and her beautiful Versace dress had become the talk of the town. She had paired her Barocco Rodeo's print dress with a black blazer, black heels and a bold red lipstick. According to a report of India Today, the cost of Priyanka’s Versace dress with a plunging neckline and thigh-high slit was Rs.1,03,581. 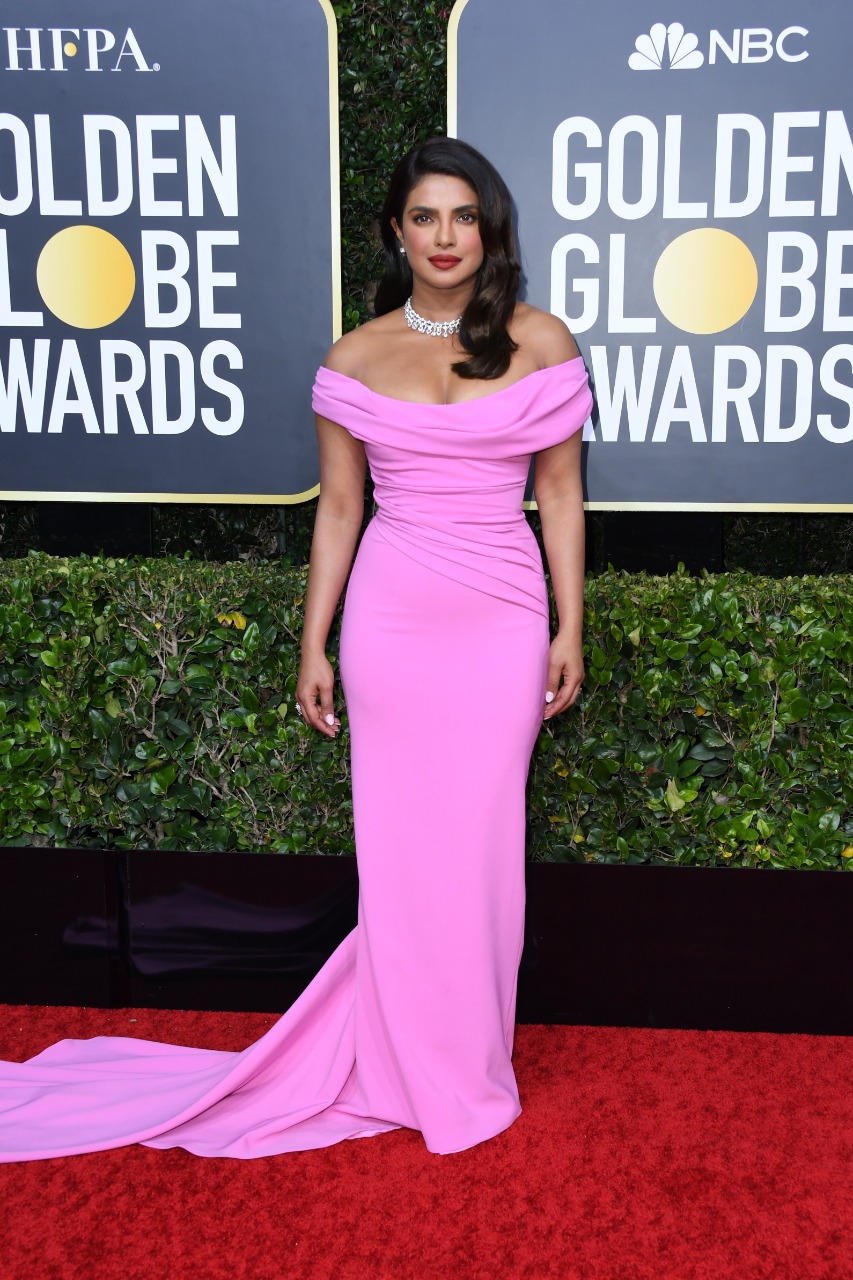 At the prestigious 77th Golden Globes Awards 2020, Priyanka Chopra had walked the red carpet alongside her hubby, Nick Jonas, and had taken our breath away. The actress had donned a fuchsia pink-coloured strapless gown with off-shoulder sleeves. The bodycon dress had featured a short trail and a plunging neckline. Pee Cee had completed her look with open tresses, dark red lip shade, Bvlgari necklace, and ear studs. Priyanka's outfit was from the designer, Cristina Ottaviano, and had cost her around Rs. 1,56,000. 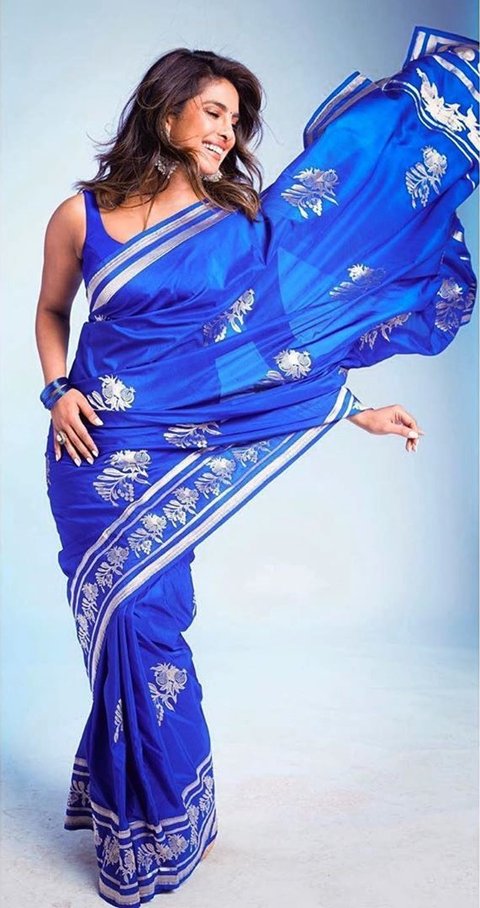 Priyanka Chopra often channels her inner desi girl avatar as she loves donning ethnic outfits at events and festivities. On one such occasion, Priyanka had decked up in a blue saree featuring patchwork and silver motifs all over it. The actress had completed her look with a pair of hoops, a ring, bangles, and a black bindi. The saree was from the label, Ekaya Banaras and Masaba Gupta, and its estimated price was around Rs. 42 lakhs. 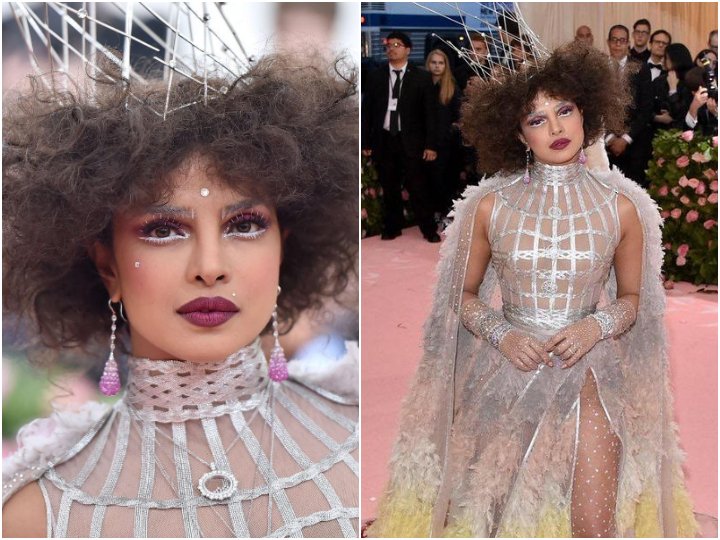 For her MET Gala look in 2019, Priyanka had opted for a silver custom-made gown from the luxury brand, Dior. The actress had completed her dramatic look with a pair of silver pumps and purple drop earrings with a multi-layered neckpiece. The outfit had reportedly cost her a hefty amount of Rs. 45 lakhs. Once Priyanka had donned a cosy pink fur coat adorned with fringes and had looked uber cool. Her chic coat was from the designer, Peter Dundas, and had reportedly cost her a hefty amount of $20,000, which when converted to Indian currency comes around Rs. 12.8 lakhs. The actress had donned this gorgeous coat at an event and had turned heads with the beauty of her outfit. For the opening dinner event of her NYC restaurant, Sona, Pee Cee had worn a blue-coloured striped shirt. She had left the top buttons open and had tucked her shirt inside a high waist vibrant neon yellow pants. The plunging neckline of the collared top had given her look an edgy twist. She had accessorised her night look with minimal and chic gold jewellery. Surprisingly, Priyanka had spent a whopping amount of Rs. 88,700 on the striped shirt and Rs. 90,326 for bright coloured wide-legged pants. Her entire outfit had cost her Rs. 1,79,026. When Pee Cee had participated in a show titled Jonas Brothers Family Roast, which was dedicated to the Jonas Brothers, Nick, Joe and Kevin Jonas. In the video, Pee Cee can be seen decked up in shimmery deep gold and black body-hugging dress with a slit. She had completed her look with wavy curls and metallic heels. While the dress itself was amazing, Pee Cee had rocked it like anything. Priyanka Chopra's outfit was from the French haute couture label, Alexandre Vauthier. On the designer's website, the dress was priced at a whopping amount of USD 3,329, which after converting to Indian currency is approximately Rs. 2,47,495.

Priyanka Chopra Jonas never misses an opportunity to serve major style goals! What do you think? Let us know!