Priyank Sharma shared a picture with his girlfriend, Benfsha Soonawalla and it speaks volumes of the 'savage' love. Check out the picture inside!

After an ugly breakup with their respective partners, the sun had shined upon Benafsha Soonawalla and Priyank Sharma again, as Cupid had played its tricks into meeting these two beautiful souls. Priyank Sharma and Benafsha Soonawalla took their time, unfazed by all the unnecessary trolling and speculations, to come out in the open about their relationship. Since then, their social media handles are full of pictures of their adorable PDA moments! Scroll down to check out the latest! (Recommended Read: Ali Fazal Shares How His Dog Made Him Feel Jealous For The First Time When His Mom Fed Him)

Benafsha Soonawalla and Priyank Sharma are a couple who never shy away from flaunting their cutesy PDA moments on their social media channels. And the love between them makes us realise how beautiful life could be if the right person comes along! Taking to her Instagram handle, Benafsha had once shared a kissing picture with boyfriend, Priyank, calling him her source of strength. She had written, “You give me so much strength. Need you so bad today” followed by a heart emoticon.

Benafsha Soonawalla Thanks Beau, Priyank's Mom On Her Birthday For Loving Her Like Her Own Daughter

Priyank Sharma Posts The Cutest Video Of Him Dancing With His Mother, Calls Her 'Senorita For Life' 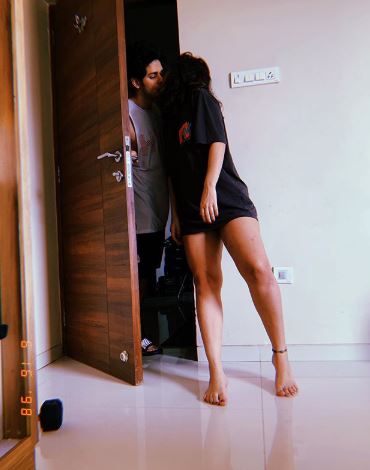 Priyank Sharma took to his Instagram handle to share a much-in-love picture of him with his bae, Benafsha Soonawalla and we couldn't stop gushing over the adorable picture. The picture sees a dapper-looking Benafsha clicking the selfie, looking savage in a sea-green t-shirt, with blue jacket atop it, giving a twist to her look, by donning a bright pink lipstick and damp hair. While the ever handsome Priyank can be seen sitting behind her, smiling shyly for the camera. The couple looked adorable as ever. Priyank also put a quirky caption alongside the picture which can be read as "We 'THE BOOGS" followed by a red heart emoji. Check out the picture below: Recently a live chat with TellyChakkar Benafsha talked about the much-asked question on the internet which is when she and Priyank are getting married? The young VJ didn’t dodge this question like a lot of celebrities but instead gave a befitting reply as she stated that she’s too young to get married and said, “Well, a lot of people don’t know that I am only 23 years old. I am very young for marriage. You can ask me the same question probably after seven to eight years." Earlier in an interview with the Bombay Times, Priyank Sharma had talked about why he and Benafsha had taken so much time to make their relationship official. He had revealed, “We took a lot of time to work on the relationship and didn’t make it public earlier because we wanted our space and privacy. Also, in the current situation, there is a lot of uncertainty about the future and that made us realise that life is too short to keep something so beautiful private anymore.” (Also Read: Shikha Singh Of 'Kumkum Bhagya' Opens Up On How Life Has Changed After The Birth Of Her Baby Girl) In the same interview, Priyank had accepted developing feelings for Benafsha inside the Bigg Boss house. He had said, “I had met Ben through common pals. We became good friends and I got to know her better during Bigg Boss. Both of us were single when we entered the house. We felt a strong connection, especially after I re-entered the house post my eviction. We developed feelings for each other, but didn’t want to make any commitment without being sure. Once out in the real world, we spent a lot of time together and realised that we were in love. It has been exactly two-and-a-half years since Ben and I are together. She gives me a sense of completeness and we fit together like missing pieces of a puzzle." (You May Also Like: Rohit Roy's Wife, Manasi Joshi Reveals How They Are Celebrating Their 21st Wedding Anniversary) We love Priyank Sharma and Benafsha Soonawalla together. How about you?

Benafsha Soonawalla Thanks Beau, Priyank's Mom On Her Birthday For Loving Her Like Her Own Daughter