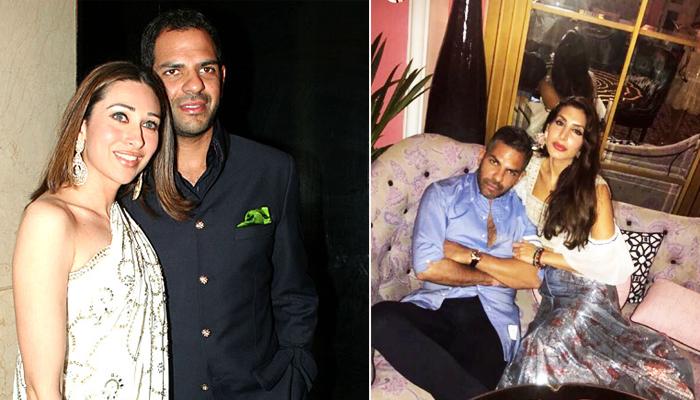 Karisma Kapoor and her ex-husband, Sunjay Kapur, got divorced on June 13, 2016, courtesy Mumbai Family Court. Sunjay went ahead and married Priya Sachdev. On the other hand, rumours of Karisma and Sandeep Toshniwal dating each other have been doing rounds on the internet for quite a while now.

Sunjay and Priya tied the knot on April 13, 2017, and were pronounced husband and wife. The wedding was followed by a grand reception party that took place at The NoMad Hotel in New York. Now, it seems that Sunjay and Priya are enjoying their marital life happily. Just today, i.e. January 10, 2018, Priya took to her Instagram handle and posted a few beautiful pictures with her hubby.

She captioned one of her Insta stories as “King Queen”. For the other, she wrote, “Hello 2018...The year of 8 resolutions! 1) To value and treasure my family and friends and spend quality time with them, 2) respect and love yourself even more this year and live a healthier life, 3) To be fearless, 4) Yoga Challenge - handstand and scorpion, 5) Be more appreciative and thankful to the universe and always be Humble and Compassionate, 6) To meditate more , 7) To Give Back and Help the underprivileged & participate or collaborate with a cause close to my heart  8)To Read and Learn.”

You May Like: 9 Celebs Who Can't Stand Each Other After Their Break Up Or Divorce

For those of you who do not know, Sunjay is Karisma’s ex-husband. Sunjay and Karisma married each other in 2003 and Karisma had filed for divorce in 2014. While the decision was mutual, things got dirtier when Sunjay alleged that Karisma married him only for money. After so many legal procedures, they finally got legally divorced in 2016.

Since then, Karisma’s alleged relationship with Mumbai-based businessman, Sandeep Toshniwal, started grabbing eyeballs of media. But, to marry him initially was not feasible for Lolo as Sandeep was a married man. He was married to a doctor named Arshita. But, if reports are to be believed, they are now divorced. Sandeep and Arshita filed for a divorce on the basis of Arshita alleging him of adultery and he in return had called her schizophrenic.

Just recently, when Karisma’s father, Randhir Kapoor was asked about her daughter’s marriage, he said, “If she wants to get married, then she has my blessings. She is young and must be seeing Sandeep, I don’t know. I also see their photographs. If she wants to begin her life again and her children are happy with it then I will support them. I don’t think there is anything wrong in that in today’s time.” In fact, things got even more solidified when a leading daily reported, “There’s a loose talk of Sandeep proposing marriage to Karisma and purchasing a three-bedroom home in Juhu.”

We hope to see Karisma and Sandeep’s wedding soon.