The excited to-be bride, Prachi Tehlan has been posting glimpses of her pre-wedding ceremonies on her IG feed. Prachi and her fiancé, Rohit Saroha's romantic photoshoot pictures from mehendi function. 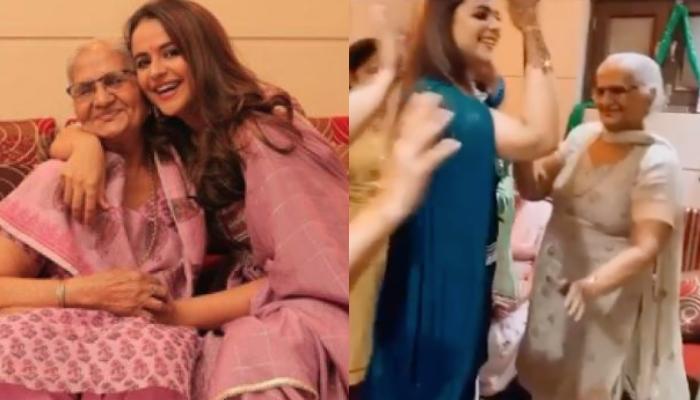 Nothing, not even a pandemic, can break the indomitable spirit of a couple when they decide to become each other's forever. Somehow, they always find a silver lining and amidst the lockdown 2020, the couples have made the weddings a trend by sporting masks and following social distancing. The wedding season has begun and while the South actor, Rana Daggubati had garnered the limelight for his marriage with Miheeka Bajaj, Diya Aur Baati Hum fame, Prachi Tehlan announced her union with her businessman beau, Rohit Saroha. (Also Read: Ravi Dubey Reveals Long-Lasting Relationship Secret With Sargun Mehta And Intention To Stay Eternal)

Prachi Tehlan is an Indian netball and basketball player but had put her sporting career on hold due to the lack of opportunities for female players. Prachi is all set to embark on the next journey of her life and tie the knot with her businessman and wildlife conservationist beau, Rohit Saroha on August 7, 2020. The wedding celebrations have already begun and doubling her Raksha Bandhan celebrations, Prachi had her bhaat ceremony too, on the same day. Before we share details on Prachi's bhaat ceremony, let's take a glimpse of the mehendi function.

The excited to-be bride, Prachi Tehlan has been posting glimpses of her pre-wedding ceremonies on her IG feed. Prachi and her fiancé, Rohit Saroha posed for some candid mushy shots in their mehendi ceremony attires and it was a treat to eyes! Prachi captioned her pictures with Rohit as "Finally we get to click some beautiful pictures together!" For the mehendi ceremony, Prachi opted for a stunning choker pleated stole and a pin-tuck detailed torso which she paired with heavy gathered sharara along with a hand embroidered belt on the waist. Rohit complemented her in a white kurta and red saafa.

Prachi Tehlan's mehendi ceremony was a fun function with her family by her side but it was her dance on London Thumakda with her nani that stole the limelight. Sharing the video, Prachi wrote, "Nani is a perfect dancer" followed by heart and love emojis. Sharing another dance videos on Kaala Chashma, Prachi wrote, "Mehendi dance with family! Woah!!! So much of fun". (Also Read: Rajkummar Rao Enjoys A Game Of Chess With Girlfriend, Patralekhaa, Shares A Snap Of Their Game)

Coming back to Prachi Tehlan's Bhaat ceremony, revealing her look and the significance of the function, Prachi Tehlan had shared a solo picture and had captioned it as "Today I celebrated #rakshabandhan with my entire family and also celebrated the first #shaadifunction which is called ‘Bhaat’. Wondering.... What is Bhaat? Bhaat, performed by the maternal uncle or Mama ji of the bride and groom ..is taken place at the wedding day or few days before the wedding ceremony. The brothers of the bride's and groom's mother are asked to stop outside the entrance of the main door on a pedestal (patta) as the ritual starts from there." Posting her special picture, Prachi had written, "Family is literally everything ! They are the ones who stand by you in every thick and thin and can do anything to see a smile on your face. This is such a special picture for me!"

It was in the year 2012 when Prachi Tehlan had met Rohit Saroha at her cousin's wedding and the latter had felt an instant connection with her. But unfortunately, three months into their relationship, Prachi and Rohit had parted ways. Destiny had different plans for Rohit and Prachi, and it was in May 2020, when they had reconnected. Recalling the same in an interview with BollywoodLife, Prachi had said, "Both of us were focussed on our individual careers and there were inhibitions in us about taking it (the relationship) forward. We hardly met thrice in those three months of dating, before deciding to part ways and move on in life. Today, when I look back, it’s hard to believe that we didn’t exchange a single message for eight years almost, until May this year, when we got to connect again."

On the second day of reconnecting with Prachi Tehlan, Rohit Saroha had proposed to her for marriage and more than the couple, their parents were excited. Revealing the same, Prachi had stated, "I thought he was joking and therefore didn’t pay much attention to it. But I won’t deny that I could sense confidence in every word of his. He was taking a stand for everything and was serious about getting married. We thought about it and decided to inform our parents. And they were elated – more excited than us." Reminiscing the roka ceremony, Prachi had shared, "Later, they came to our place for the Roka ceremony, which took place on the 4th of July, which is my mom’s birthday. And here we are, ready to be together for life within the next two days." (Also Read: Sunny Leone's Mom-In-Law's Birthday Celebration With Grandkids, Nisha, Noah, Asher Is All About Love)

We can't wait to see Prachi and Rohit as bride and groom!