In a recent Instagram post, Eijaz Khan shares a picture from his workout and says that he had asked his girlfriend, Pavitra Punia before posting it. Check out the latter's reaction to the photo!

When a celebrity declares their love on national television, a lot of questions are raised on the genuineness of the love and it is often believed to be not-so-real and just for the camera. A similar situation was faced by the Kkavyanjali actor, Eijaz Khan and the Geet-Hui Sabse Parayi actress, Pavitra Punia when they had started falling for each other. However, the couple did not care much about it and had professed their love for each other on Bigg Boss 14 as Pavitra Punia wanted the world to know that she was head-over-heels in love with Eijaz Khan. Eijaz Khan and Pavitra Punia, who had met and fallen in love with each other during their stay at the Bigg Boss 14 house are having a quality time with each other now. While the duo is staying with each other currently, we have also seen their catfights on Bigg Boss 14.

Eijaz Khan had dated his Kkavyanjali co-star Anita Hassanandani and Natalie Di Luccio in the past. He was also in a relationship with Nidhi Kashyap, who had filed a police complaint against the actor alleging him of physical abuse. During his appearance on Rajeev Khandelwal's show, JuzzBaatt, Eijaz had made a shocking revelation that he had once cheated on his girlfriend. He had broken down into tears and had said, "The one and only time jab maine kisi pe cheat kiya. Galti hui jo mere puri zindagi ka nichod nikal diya." On the other hand, Pavitra Punia was allegedly dating Paras Chhabra while she was married to her ex-husband, Sumit Maheshwari. Though they had their own share of failed relationships, Pavitra and Eijaz has found love in each other. 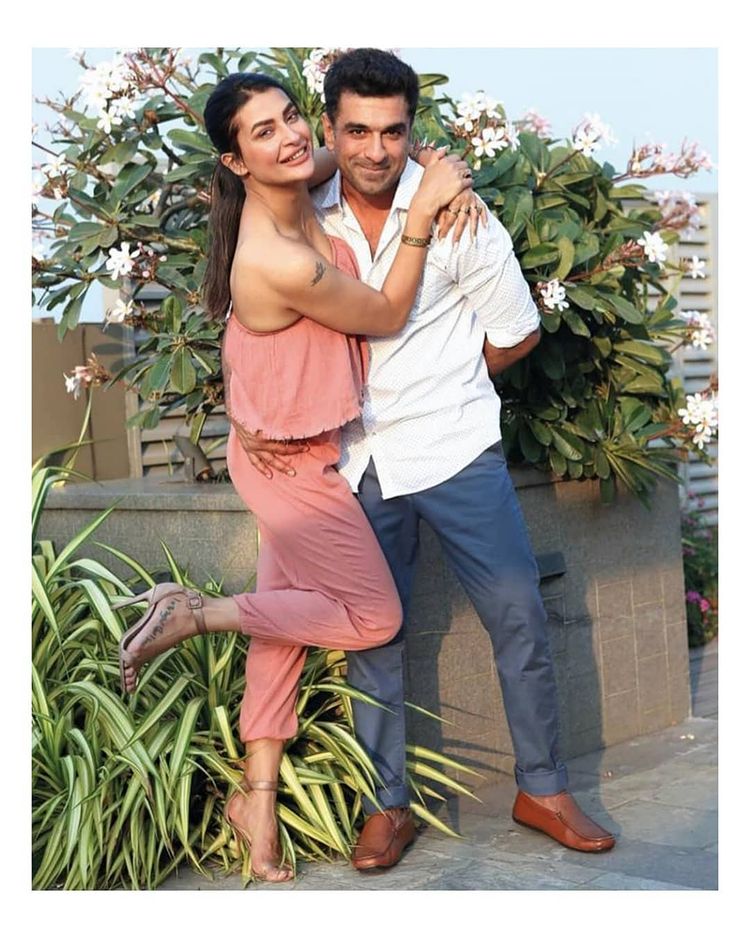 The duo has again given us some major couple goals through their fun banter on Instagram. While Eijaz shared a bare-chested photograph from his workout sessions, he did not forget to mention that he had asked his girlfriend, Pavitra Punia if it would not be too much to post the picture. The actor wrote atop, "Pavi se poocha ki ye photo post karoo ya na karoo? thoda show off sa hai. lekin jaise maine kaha, there is no substitute for hard work. so am working hard. #homegym me #workout shuru kiya hai. been feeling weak and lethargic. lockdown has taken its toll on my physical and mental health. so push karna padh raha hai. trying to gain some #muscle #eijaz khan. kaisa lagg riyaaa hoo??" As soon as the post was shared by her boyfriend, Pavitra Punia had taken to her Instagram handle to reply "Am sweating", followed by a kiss emoticon. 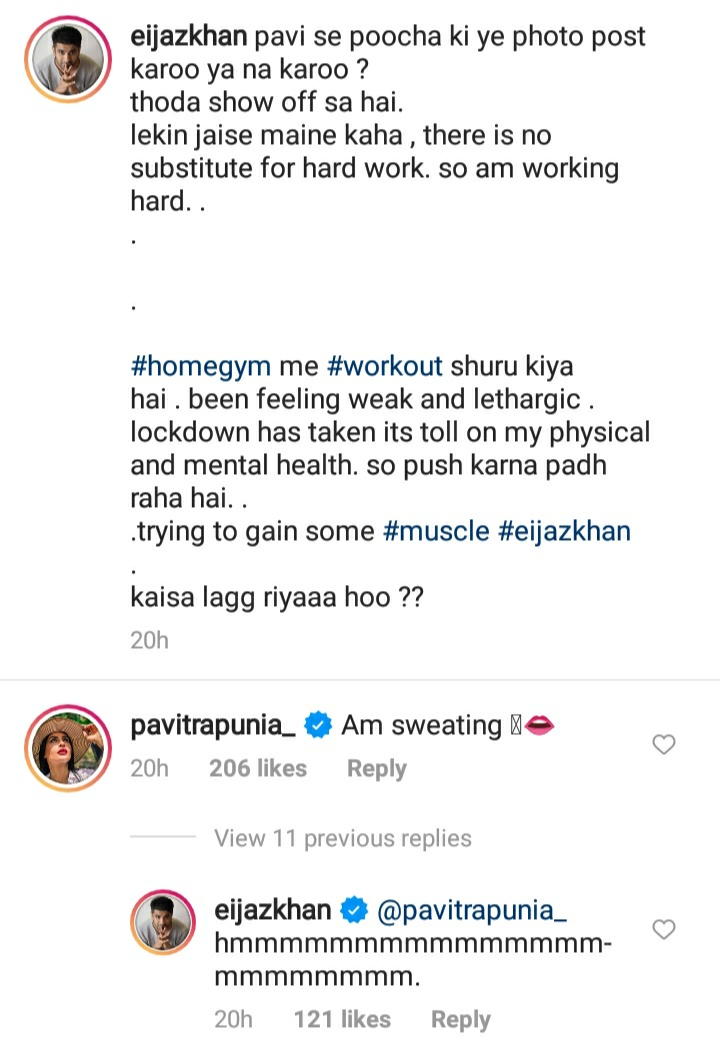 A few days ago, the couple had come live on Instagram and Eijaz Khan had taunted Pavitra Punia for making moti roti. However, Pavitra's reply was perfect. She had replied that a little dough was left and thus, she had added it to the roti, making it thick. However, Eijaz replies, "Koi Nahi". His girlfriend takes a jibe at him and tells the audiences that "Iss insaan ko itni patli patli rotiyaan banakar khilayi hain maine." To which Eijaz said, "Ehsaan Jata Rahi hain." Well, Pavitra's reply was a perfect one as any other wife would have replied so to her complaining husband.

In an interview with Bollywood Hungama, Pavitra had shared that how her life had changed after meeting Eijaz. When the duo was asked about their wedding date, Eijaz had replied that he does not want to put a date on it and people will know about it when it happens. He had said, "I am a very private person, I wanted to make Pavitra secure and show it to the world that my intentions are very Pavitra, so did that. But, now we would want to keep it personal. I do not want to put a date on it, I do not want to tell people what we are going to do. Whatever happens and whenever it happens, you will get to know about it. There is nothing to hide but I just do not want to talk about it so much." 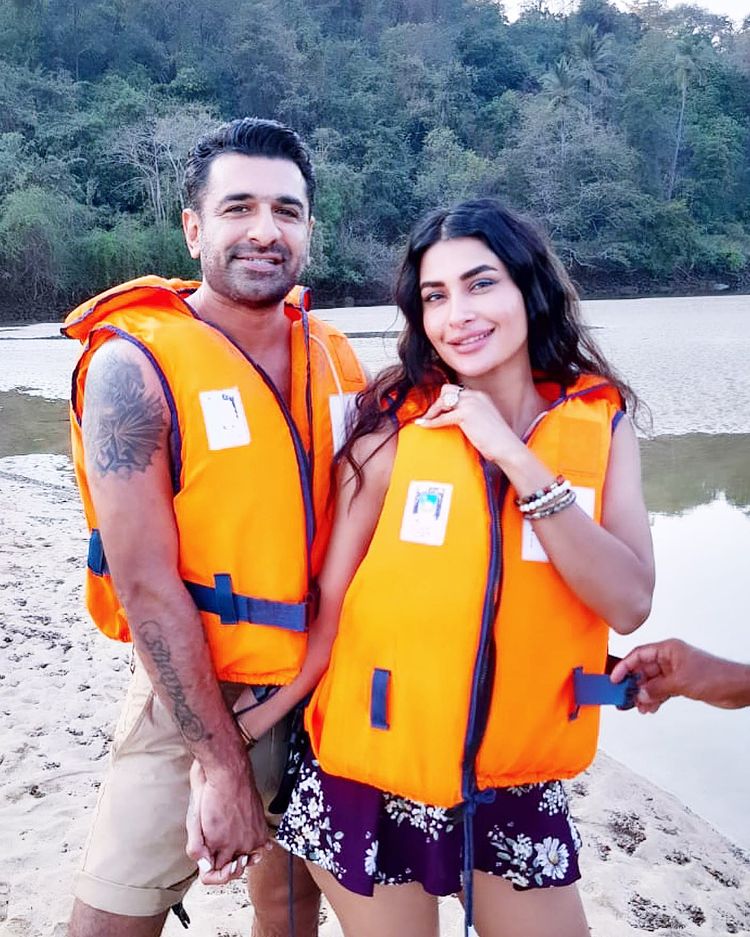 We wish that Eijaz Khan and Pavitra Punia keep on sharing such happy moments with each other.