After the long wait of four years, Shah Rukh Khan made a roaring comeback on the big screen with his film, 'Pathaan', and the early reviews of the film have already predicted it to be a blockbuster.

The Badshah of Bollywood, Shah Rukh Khan’s much-awaited film, Pathaan has been released in theatres this morning, and the entire internet is buzzing with the film’s first reviews. The movie is directed by Siddharth Anand, who is the grandson of iconic screenwriter, Inder Raj Anand. It wasn’t an easy decision for Shah Rukh Khan to pick up his next project after the failure of his film, Zero, which was released four years ago in 2018.

When Siddharth Anand had approached Shah Rukh Khan with the idea of Pathaan and a stellar star cast that includes the likes of Deepika Padukone, John Abraham, Ashutosh Rana, Dimple Kapadia and others, it wasn’t easy for King Khan to decline it. However, more than anything, it was Shah Rukh Khan’s belief in Siddharth’s work which convinced him to hand over his much-awaited debut in the hands of a director, who has given films like Salaam Namaste (2005), Ta Ra Rum Pum (2007), Bang Bang! (2014), War (2019) to Bollywood. 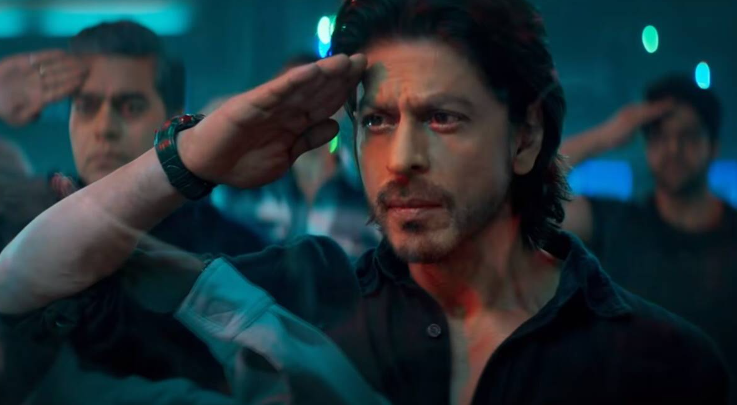 The movie caught into a lot of controversies since the release of its first song, Besharam Rang, on December 12, 2022, as a section of society opposed the colour of Deepika Padukone’s bikini. However, soon the controversies got settled, and as per the first reviews of Pathaan, it is showing all signs of becoming Bollywood’s first blockbuster of 2023. This is why it looks like Siddharth Anand and Shah Rukh Khan have provided the much-needed boost to the Hindi film industry, which was desperately waiting for a banger like this. 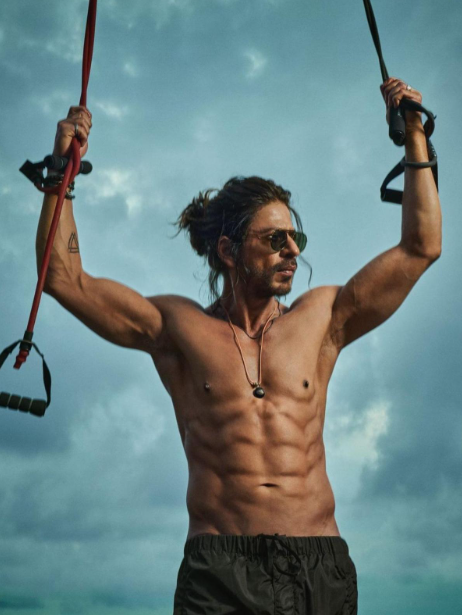 The first reviews of Pathaan have already shaken the entire internet; while multiple trade analysts have declared it to be a game changer for Bollywood, most of them are praising the film for exceeding expectations. Shah Rukh Khan’s fans are on cloud nine, and even moviegoers called it a mass entertainer. It was famous trade analyst and movie critic, Taran Adarsh’s review that rested all the doubts around this film’s opening at the box office. 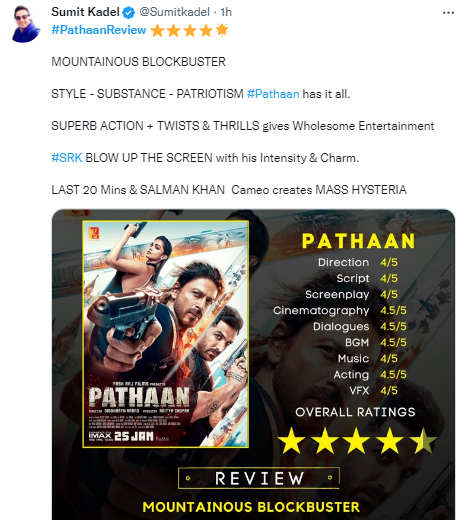 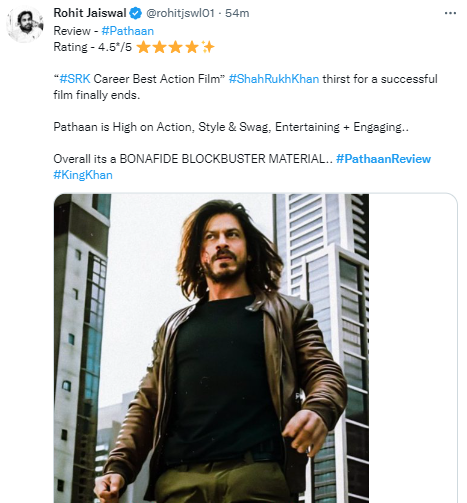 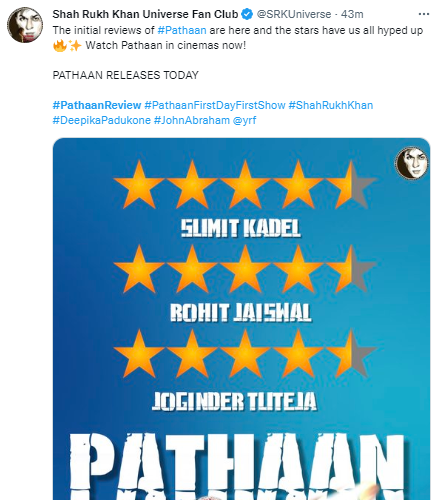 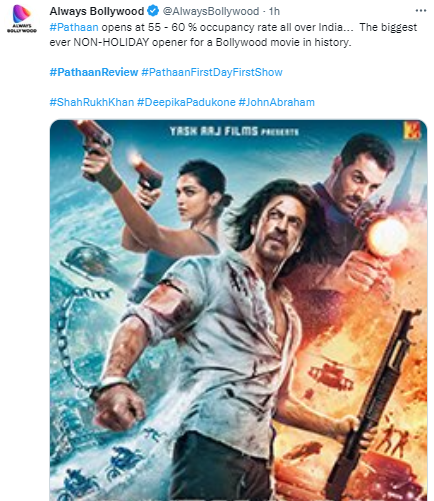 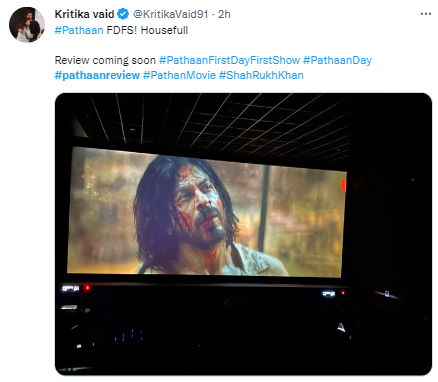 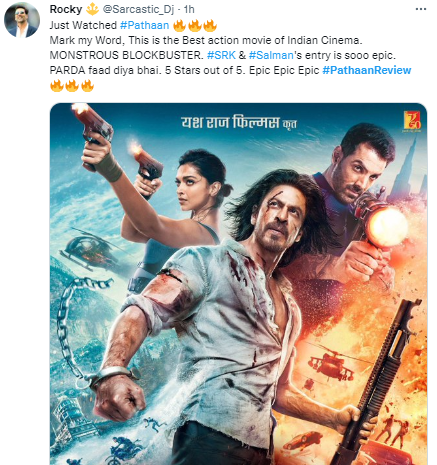 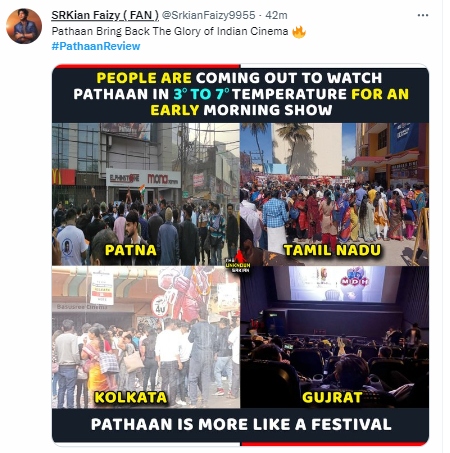 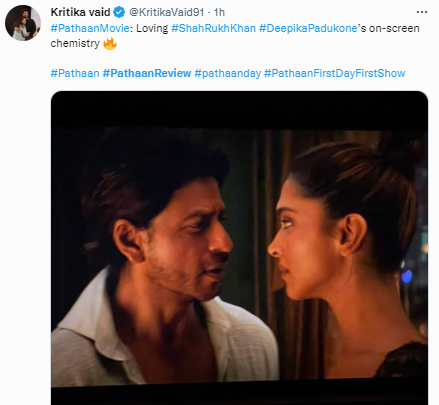 On January 25, 2023, Taran Adarsh took to his Twitter handle and shared a poster of Shah Rukh Khan’s film, Pathaan. In his tweet, the film critic praised the movie and admitted that Siddharth Anand’s film has ticked all the boxes and predicted it to be a blockbuster. With a rating of 4.5 stars, Shah Rukh’s fans hailed Taran Adarsh’s review on Twitter. His tweet can be read as:

"#OneWordReview… #Pathaan: BLOCKBUSTER. Rating: 4.5 #Pathaan has it all: Star power, style, scale, songs, soul, substance and surprises… And, most importantly, #SRK, who’s back with a vengeance. Will be the first #Blockbuster of 2023. #PathaanReview." 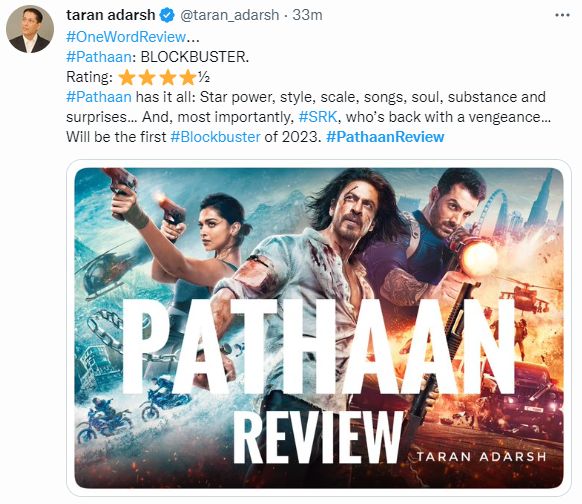 Another renowned trade analyst and industry tracker, Sacnilk admitted that if the early reviews and collection details are to be measured, then chances are high that Shah Rukh Khan’s movie could hit the mammoth Rs. 50 crores mark on its opening day. Not only this, but if Pathaan could manage to touch the Rs. 50 crores mark, then chances are high that it could break the record of any of these three films, War (Rs. 53.3 crores), Thugs of Hindostan (Rs. 52 crores), and Hindi-dubbed version of KGF: Chapter 2 (Rs. 53.9 crores).

As per the early reviews, both from the audiences and film critics, Pathaan is a mass entertainer that clearly has everything in store for almost everyone. From Shah Rukh’s jaw-dropping action sequences, King Khan’s sizzling chemistry with Deepika Padukone, John Abraham’s robust character to Dimple Kapadia and Ashutosh Rana’s impressive roles, Pathaan is filled with a lot of positives. Apart from everything else, Pathaan also features a thunderous cameo of Salman Khan’s character, 'Tiger'. 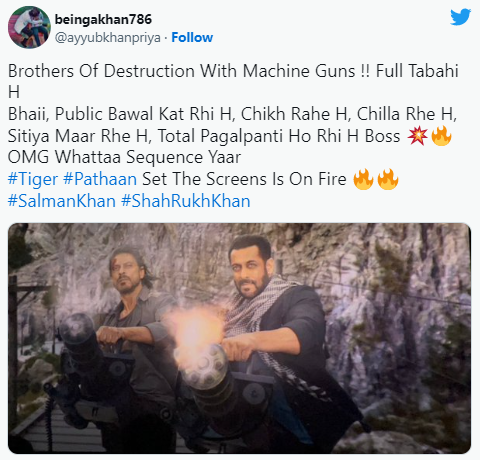 Salman Khan’s cameo broke the internet as videos of crowds going bonkers in theatres are doing rounds on the internet. While some are calling them by the name ‘brothers of destruction’, most of the fans have hailed Salman and Shah Rukh for teaming up to give a delightful entertainer to the audience. As per the reports, the teaser of Kisi Ka Bhai Kisi Ki Jaan was also shown in theatres before the start of the film, and the decision was hailed by the fans of India’s two biggest superstars. 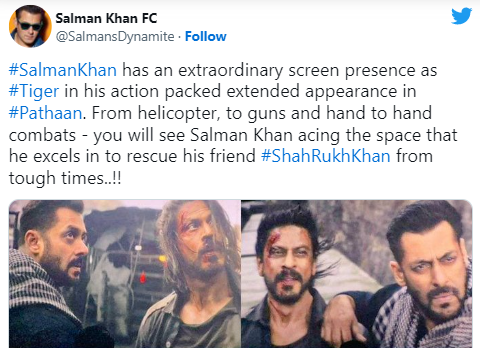 While almost the entire nation is dipped in the craze of Shah Rukh Khan’s film, Pathaan, and celebrating the day like a festival, some reports of a clash and protests against the movie were reported from Bihar and Indore. The protestors claimed that the colour of Deepika Padukone’s bikini in the film’s song, Besharam Rang had hurt the sentiments of Hindu people across the nation. 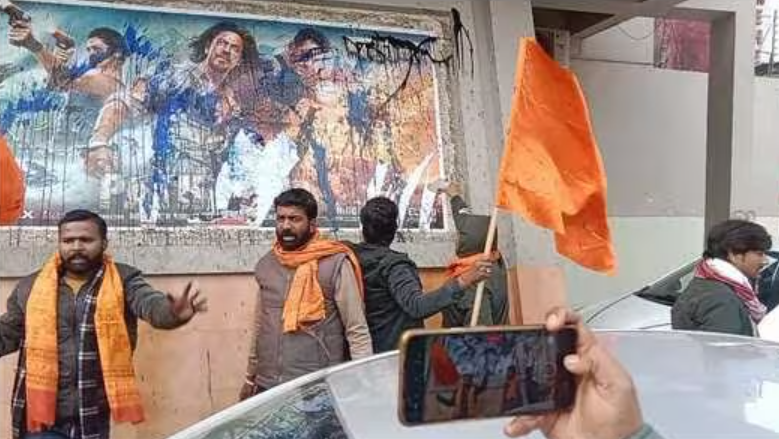 Amid the protests against Shah Rukh Khan’s film, Pathaan in Agra and some parts of Bihar and Indore, the Vishwa Hindu Parishad (VHP) has released a statement in which they announced that they would not oppose the film. According to a report in ANI, it was VHP spokesperson, Shriraj B Nair, who shared that they will watch the film and examine the changes made by the makers, and if they find them insufficient, then only they’ll consider opposing it. He said:

"For the time being, we will not oppose the film as it would not be right to protest without seeing the movie. As far as our earlier objections were concerned, we objected to the misuse of the saffron color and the use of words like ‘shameless colour’. Keeping our objection in mind, the changes made in the film are correct. If after watching the movie we feel that there is something wrong, then we will reconsider." Have you seen the film, Pathaan yet? Share your reviews with us!

Whopping Fees Charged By The Cast Of 'Pathaan': From Deepika Padukone To Shah Rukh Khan 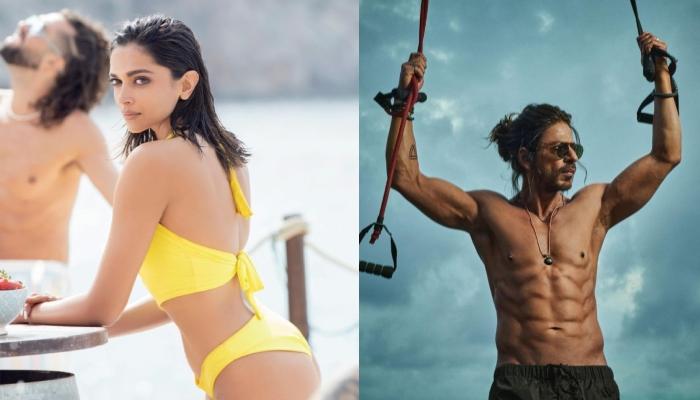 Siddharth Anand’s upcoming film, Pathaan has been hitting the headlines for some time now. Fans are excited to find out every single detail about the film, and they're hooked on every new update about the same. From knowing about the cameo roles to going crazy over the new posters and excitedly waiting for