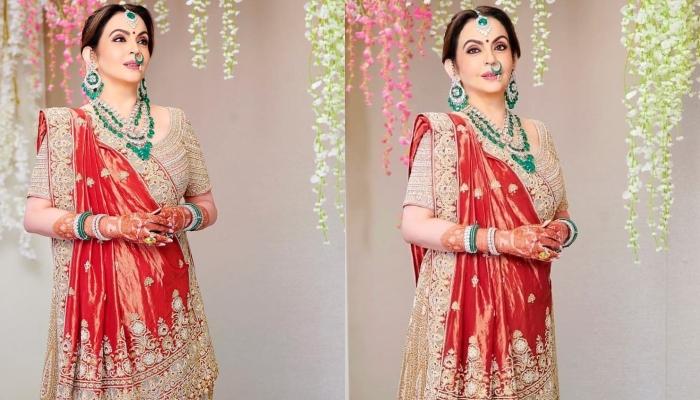 In India, weddings are celebrated as a festival, and for our parents, it is the most emotional affair. To see their little tots, grown up and all set to get married is a huge deal. After all, it’s their day too! Recently, Ambanis gave us wedding goals with their son, Akash’s dhoom-dhaam wali shaadi to Shloka Mehta. (Recommend Read: Nargis Fakhri Turns To Spirituality And Yoga After Breakup With Matt Alonzo, Deletes His Pictures)

However, it was the mother-of-the-groom, Nita Ambani that took our attention and gave competition to her own bahu, Shloka Mehta in style. The founder of Reliance Foundation is quite updated in terms of choosing the right designers and style. For her son, Akash’s wedding that took place on March 9, 2019, she chose a masterpiece from designer duo Abu Jani and Sandeep Khosla. Nita ji looked mesmerising in a beige ghaghra and teamed her outfit with a green-hued jewellery that completed her look:

The designer duo posted Nita ji’s pictures on their official Instagram handle and revealed about the details of the outfit, “Nita Ambani wears an ethereal Ghaghra in beige. Featuring intricate pearl and maal embroidery, large motifs and exquisite borders on the hem. Her blouse is composed of multiple borders. A vermilion silk tissue dupatta provides a flourish of auspicious red and gold to his distinctly elegant, hand-embroidered, custom ensemble.” (Also Read: Surbhi Tiwari's Husband Designed Her Wedding Reception Lehenga, He Worked On It For Eight Months)

For the baraat, Nita ji took her sartorial game a step ahead as she donned a beautiful lehenga from designer, Sabyasachi Mukherjee. And the highlight of her entire ensemble was her son, Akash and bahu, Shloka’s name embroidered on her blouse with 'Shubhaarambh' in the center. Take a look at the same below:

Like a doting mother who wants to show all her happiness to the world, Nita ji left no opportunity to let the world know the level of her excitement. On March 9, 2019, the Ambanis organised a post-wedding bash for Akash and Shloka’s wedding. And, as we all know, no Ambani wedding can ever be complete without the mother of the clan, Nita Ambani’s gracious dance moves on the stage and we got our hands on the viral video. Wherein, the loving mother, Nita ji can be seen dancing her heart out on a classical number, ‘Achyutam Keshawam Vishwa Damodaram’. Take a look at the video below: (You May Also Like: Sonali Bendre Shares A Cryptic Post About Her Cancer, Goes Back To Treatment, Calls It 'New Normal')

On March 12, 2019, Nita Ambani and Mukesh Ambani organised a special bash, as an expression of gratitude and respect for the people who make the city and nation safe, and to seek their blessings for the newly-married couple, Akash and Shloka. They celebrated the new beginnings of their family with thousands of members of Army, Navy, Paramilitary Forces, Mumbai Police, Railway Protection Force, and their families. The highlight of the celebrations was a special Musical Fountain show called Ananta Prem at the Dhirubhai Ambani Square which is conceptualised by Nita Ambani set on the theme of Krishna’s Raas Lila to symbolise an eternal love story.

On the occasion, Nita ji opened up about the event, and had said, “We feel delighted and honoured that the protectors of this city and the nation are joining us in our celebrations. It’s an emotional and joyous occasion for us and we hope these heroes, who make us proud everyday, will shower their blessings on Akash and Shloka.” (Don't Miss: Aamir Khan And Kiran Rao Share A Romantic Lip-Lock At His 54th Birthday Celebrations With The Media)

We hope all the mother of the bride-to-be's and the groom are taking inspiration from Nita Ambani's sartorial picks! 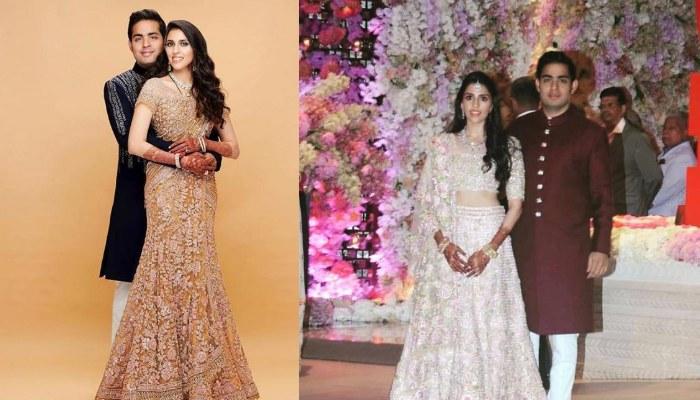 Every girl dreams of a big fat Indian wedding in which her prince charming will come on a white horse to take her away and they will start their ‘happily ever after.’ From grand décor, scrumptious delicacies to designer ensembles, an Indian wedding is all about glam and glitz. And