An unseen picture from one of Shloka Mehta's family function has emerged, wherein, we get to see a glimpse of the Mehta's smiling for the camera.

There is a wedding in your family and everyone is beaming with joy! But is the newbie dulhan who undergoes a zillion emotions inside her. "Will I be alright away from the comforts of her home? Do I have to be answerable for everything that I do? Will my in-laws understand me the way my family did? Will my hubby treat me the same way and take a stand for me like he always did?"- are some of the questions which haunts every newbie bride when she is about to get married. And when she finally does, a whole new world awaits her!

(Also Read: Ranbir Kapoor-Alia Bhatt Hugged His Ex, Katrina Kaif When Bumped Into Each Other At Filmfare Awards)

When a boy gets married, it is his mother who is the happiest! We have seen Nita Ambani, over the moon with happiness, at her son, Akash Ambani’s wedding with his childhood sweetheart, Shloka Mehta. Akash and Shloka became each other’s forever on March 9, 2019, in Mumbai and Nita Ambani gave major 'mother-of-the-groom' fashion goals at the wedding. Nita Ambani glowed with pure joy in her heavily embroidered pink lehenga, but it was the back of her blouse that had garnered the limelight. Her high-neck heavily embroidered blouse had a Kalash-inspired design with the word ‘Shubharambh’, flanked by her son and bahu’s names, ‘Akash’ and ‘Shloka’ embroidered in gold zari. Check it out:

And now, an unseen picture from one of Shloka Mehta's family function has emerged, wherein, we get to see a glimpse of the Mehta's smiling for the camera. What looks like a picture from a wedding celebration, Shloka posed in similar fashion with her mom, Mona Mehta, father, Russell Mehta, brother and her beautiful bhabhi and her sister, all in one frame! Checkout the amazing 'Mehta picture' here: 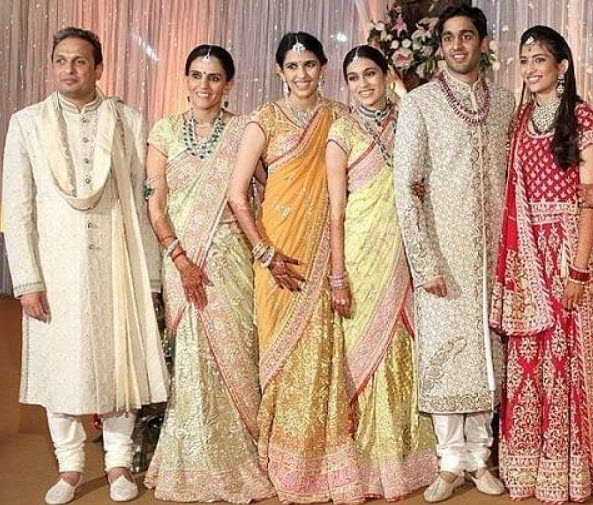 Amazing, right? Speaking about family weddings, let us take you back in March 09, 2019, when Shloka Mehta got married to her childhood sweetheart, Akash Ambani. And do you know who was the most excited for the #AkuStoleTheShlo wedding? It was her mother-in-law, Nita Ambani! For Shloka Mehta and Akash Ambani's wedding rituals, Nita chose a masterpiece from the ace designer duo, Abu Jani and Sandeep Khosla. Elaborating on the details of Nita Ambani’s ensemble, the designer duo shared, “Nita Ambani wears an ethereal Ghaghra in beige. Featuring intricate pearl and maal embroidery, large motifs and exquisite borders on the hem. Her blouse is composed of multiple borders. A vermilion silk tissue dupatta provides a flourish of auspicious red and gold to his distinctly elegant, hand-embroidered, custom ensemble.” (Also Read: Sara Ali Khan Screams Kartik Aaryan's Name On 'Love Aaj Kal 2' Sets, Leaves Him Embarrassed [VIDEO]) 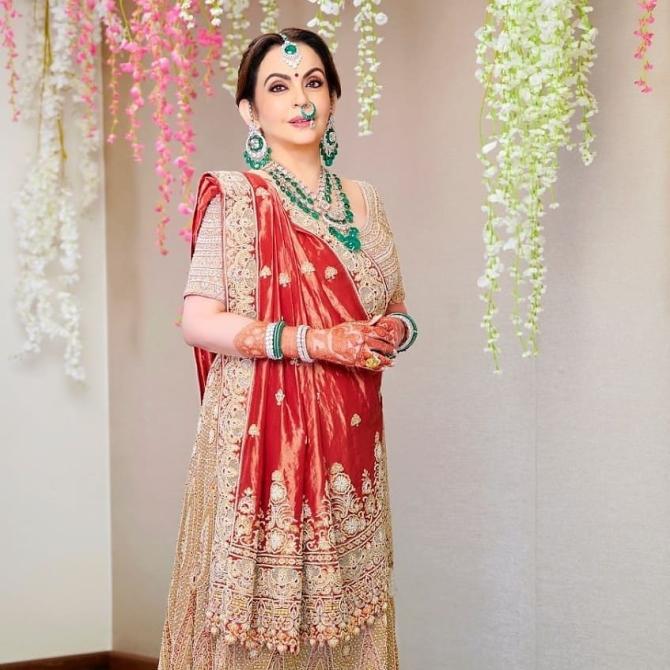 In 2018, Nita Ambani was all-praises about her then soon-to-be daughter-in-law, Shloka Mehta and had stated, “I have known Shloka since she was four and we are all delighted to welcome her to our home and our hearts.” Shloka also spoke about her then hubby-to-be Akash Ambani, and was quoted as saying, “Despite years and busy schedules, we have always found ways to stay connected. Akash is incredibly grounded, and we share a bond based on meaning and memories. We don't just get along - we also support each other's hopes and aspirations and are determined to build a sense of purpose into our lives together. We are lucky to have a love that began with being best friends and luckier still to have such supportive families.”

According to Indian Express, Nita Ambani had dedicated a poem, 'A Story of Love' at Akash Ambani and Shloka Mehta's engagement in 2018. It could be read as, “They went to Kindergarten to learn ABC, Not knowing — que sera sera —What their future would be… Gummy bears and jujubes, Sparkle pops and jelly beans… Sweetened their lives, From childhood through teens! Till glasses of milk made way for cups of tea… And the Sky fell in love with sweet Chants of glee! From ponytails and Barbies… From pranks and football… The years just blended… And, today they stand tall –With their eyes full of love With one single plea…Their hearts beat in rhythm Singing, “Will you marry me?” Today we bless them, and today we pray: All through their lives, on each golden day, May they always be there holding hands side by side, May Gods shower their blessings on this groom and his bride!” (Also Read: Shweta Bachchan Nanda's Proud Father Amitabh Bachchan Turns Paparazzi As She Walks The Ramp [VIDEO]) Having said that, what is the most fondest moment at your or any wedding that is close to your heart? Share it with us! After the grand star-studded pre-wedding festivities in Switzerland, Akash Ambani and Shloka Mehta are now pronounced as husband and wife. It’s finally March 9, 2019, and out social media timelines are filled with the photos and videos of the childhood sweethearts-turned-lifetime partners, Akash and Shloka. Akash had proposed to his