Scrolling through social media, we got our hands on a collage of Nita Ambani and Isha Ambani in their bridal looks and the striking resemblance between the mother-daughter duo was quite hard to miss.

Life is empty without her. House sans her is not at all ‘home sweet home’. Our smiles lack happiness if she’s not around. She is that irreplaceable person in our life without whom life’s incomplete. Even when we aren’t in a mood to talk to anyone, we rest in her lap, listen to her stories and it is her voice that soothes our pain. She is the only truth in the galaxy of lies. She is our mother! There can’t be a prouder moment for a daughter when she achieves even 0.1% of what her mother is. And for a mother, there can’t be a prouder moment when someone compliments that her daughter is just like her. (Also Read: Akash Ambani And Shloka Mehta's Traditional Ensembles Redefine Style Goals And We Can't Get Over It!)

If we had to pick one celeb mother-daughter duo, who exudes immense love and pride for one another, then it has to be Nita Ambani and her 28-year-old princess, Isha Ambani Piramal. Once known as the daughter of Ravindrabhai Dalal, the senior executive of the Birla group and then as the wife of India's richest person Mukesh Ambani, Nita Ambani has proved to be much more than just a billionaire’s wife. And her daughter, Isha is following the footsteps of her mother and has proved to be much more than her surname. By carving a niche for herself in the business and being ranked second on Forbes' 'Youngest Billionaire Heiresses' list in 2008, Isha is a name that comes as an inspiration for millions of girls out there.

It has been 35 years since Nita Ambani had tied the knot with Mukesh Ambani and more than a year since Isha Ambani had added Piramal to her name post her wedding with Anand Piramal. But even today, the pictures of their respective weddings has managed to make our hearts swoon. Scrolling through social media, we got our hands on a collage of Nita Ambani and Isha Ambani Piramal in their bridal looks and the striking resemblance between the mother-daughter duo was quite hard to miss. While Nita Ambani had looked graceful as ever as a bride in 1985, Isha had impressed us with the same elegance as her mother in her bridal avatar from her wedding in 2018.

Isha Ambani Piramal had personified elegance and grace as a bride, and had given a zillion goals to many to-be brides that someone so simple, could look so ravishing on their wedding day! But you know what was exquisite about her wedding ensemble? The billionaire heiress, Isha, who dons a lehenga better than no one, had looked up to the celebrity designer duo, Abu Jani Sandeep Khosla for her wedding ensemble. While she had rocked in an ivory lehenga, we really loved how Isha had included her mother, Nita Ambani's wedding saree as a major part of her wedding attire. Isha had worn her mother, Nita's 35-year-old red wedding saree, as her dupatta (as you can see it in the picture), with her main ivory wedding ensemble done by designer duo, Abu Jani Sandeep Khosla. (Also Read: Mukesh Ambani And Nita Ambani's Love Story: Proposed His Muse In The Middle Of Traffic) In a post-wedding interview with Vogue, Isha Ambani Piramal shared interesting details about the life of the Ambanis, the feeling to be a part of such a prestigious lineage, growing up in the Ambani household and the ‘boss lady’ of the Ambani house, Nita Ambani. Revealing that she and her twin, Akash Ambani were born through IVF and calling her mother, ‘tiger mom’, Isha had shared, “My parents had us after seven years of marriage—my twin Akash and I were IVF babies. When my mother finally had us she wanted to be a full-time mum initially. Later, she went back to work when we were five, but she was still a tiger mom.”

Apart from being a wonderful mother and a wife, Nita Ambani has been leading various Reliance enterprises. Speaking about what she has learnt from her mother and what is her attitude towards women at her workplace, the multi-millionaire heiress had stated, “As much as I want to believe that women can have it all, I know that my mom gave it all up to raise us. But once we grew up, I also saw her balance work and home perfectly. Watching her play all these different roles—from full-time mom to businesswoman—I learnt how important each facet is in a woman’s life and how one needs to define what “having it all” means during these different stages. I feel very passionately about gender equality and equal participation in the work force because growing up I was made to believe that I could do whatever my brothers could do, as well if not better. So as a working woman, I believe that companies must create an environment that fosters equal participation.”

If you think you’ve seen every single picture and video from Isha Ambani and Anand Piramal’s star-studded lavish wedding, then you’re wrong! Even after 16 months of the grand wedding, multiple pictures and videos are popping up on social media from #IshaKiShaadi and we can’t help but gape with wonderment how lovely Isha and Anand had looked on their D-day. A few months back, we had got our hands on a beautiful picture from Isha’s vidaai in which she could be seen teary-eyed with her family members including parents, Nita Ambani and Mukesh Ambani, brother and then soon-to-be sister-in-law, Akash Ambani and Shloka Mehta and the probable soon-to-be Ambani bahu, Radhika Merchant, around. (Also Read: Nita Ambani Reveals How Much Pocket Money She Used To Give Akash, Isha, Anant To Make Them Value It) 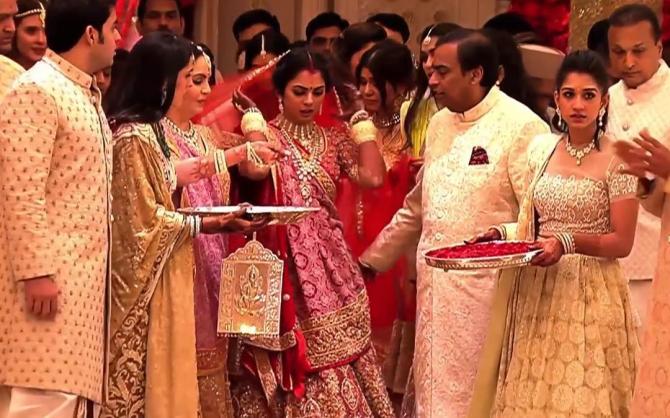