'Happy Days' actor, Nikhil Siddhartha talked about tying the knot with his long-term girlfriend, Pallavi Varma in a private wedding amid lockdown. Take a look! The coronavirus pandemic is showing no signs of slowing down, as a result, it’s hard to predict a time when this lockdown will be lifted. Maybe, that is the reason why a lot of people and even celebrities are taking the route of private weddings because those big-fat weddings seem like a distant dream. One such celebrity is Telugu star, Nikhil Siddhartha, who got married to his girlfriend, Pallavi Varma in an intimate wedding with all the necessary precautions. The pictures and videos from their marriage are already getting viral on the internet for all the good reasons. (Recommended Read: hen Amitabh And Jaya Bachchan Posed For A Perfect Family Portrait With Grandkids, Navya And Agastya)

Now, the actor has come forward and talked about the emotions he felt during the wedding and what it feels like finally getting married. Because we all know that just like everyone, Nikhil also wanted a big-fat wedding but had decided to go for a private one, seeing the current circumstances. 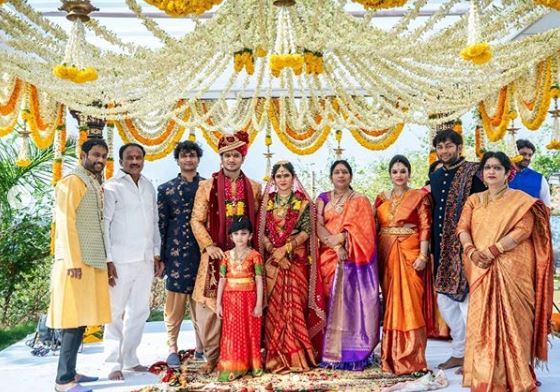 In a conversation with the Hyderabad Times after his intimate wedding with Pallavi and revealed the emotions he was experiencing during the marriage ceremony. He said, “I’d like to thank everyone for their wishes. I’ve been waiting a long time for this day and I’ve finally joined the married men club. I’m on cloud nine.” Well, there’s no doubt that their wedding is going to be written in history with many other weddings that have happened in the country in this lockdown. However, numerous people on social media are congratulating and applauding the safety measures taken by the family during the wedding. Also, a lot of Tollywood celebrities have come forward to bless the adorable couple for a happy married life with their warm wishes on social media. Take a look. (Don’t Miss: Sumeet Vyas Reveals The Junior Vyas-Kaul Can Arrive Anytime Now, Says Wife, Ekta Is Prepared) 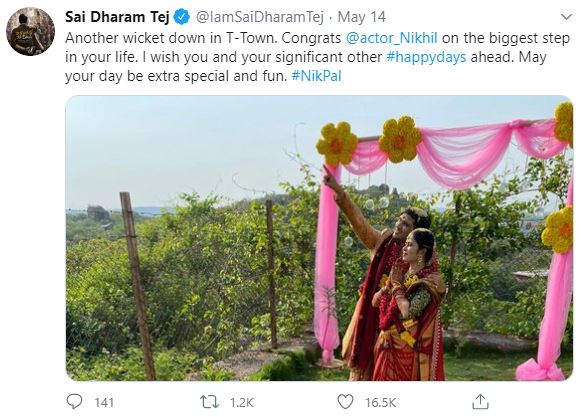 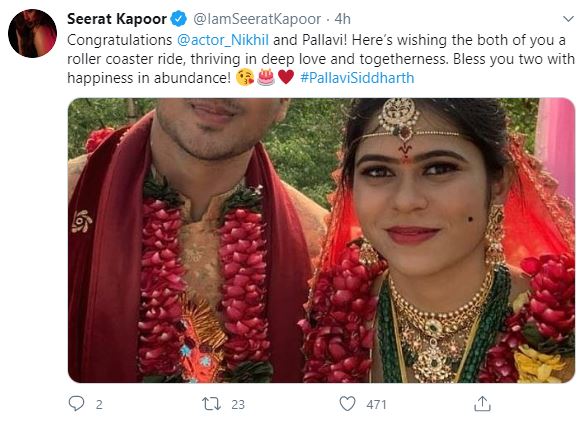 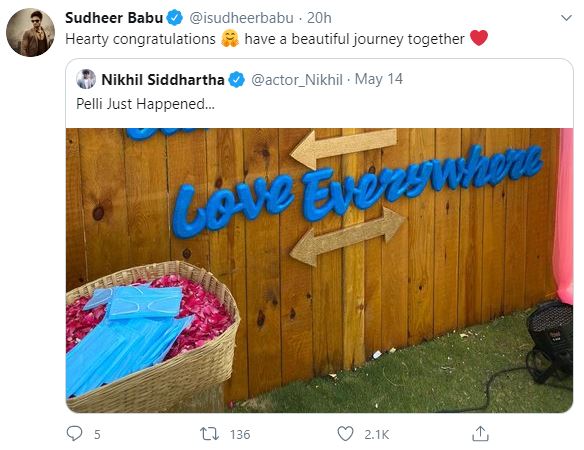 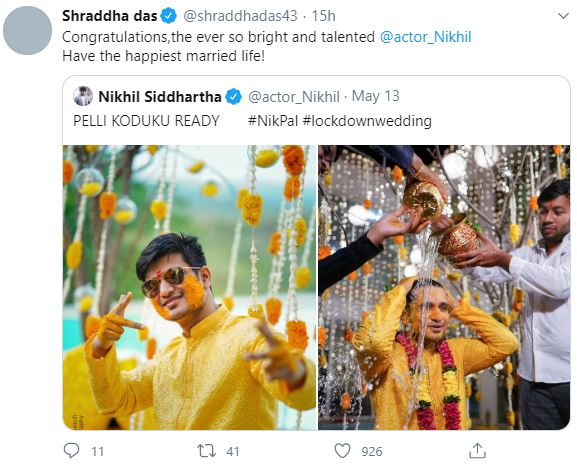 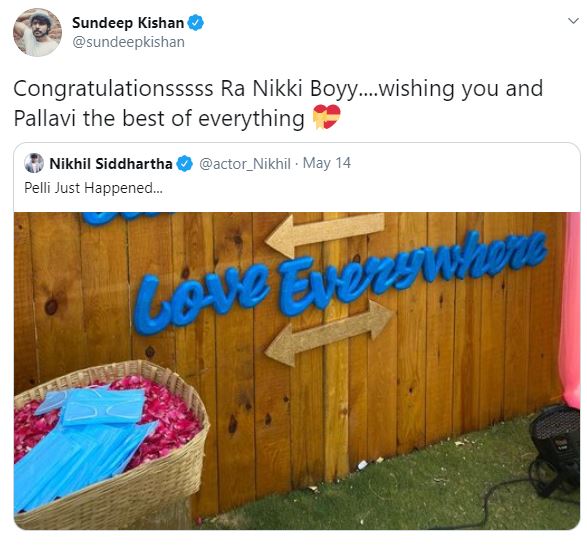 Telugu star, Nikhil Siddhartha had tied the knot of a lifetime with his long-term girlfriend, Pallavi Varma after getting engaged a couple of months ago. Like a lot of lockdown marriages, this one was also a private affair with all the necessary precautions taken by the invitees at the wedding. The marriage has taken place on May 14, 2020, around 6 a.m. at a farmhouse in Hyderabad with Hindu traditions and every single ceremony. Talking about the bride, Pallavi, then she had looked graceful in the red and golden saree that she had teamed-up with matching jewellery to get a perfect bridal look. On the other side, groom, Nikhil had looked handsome in his designer sherwani. On May 14, 2020, the actor had taken to his Instagram handle and had posted some pictures from his wedding ceremony for his fans and followers. While in some pictures, we could see Nikhil getting ready for the ceremony, some are from her wedding vows and had also posted a video with all the memorable moments from his marriage. Along with the video, Nikhil had written a caption informing people about the precautions they had taken during the wedding, and it could be read as “Keeping in mind the Govt Guidelines on COVID19... All Guests were screened, and safety precautions are taken at #NikhilPallavi Wedding today. Here is Raja Ravindra Entering the ceremony and being screened #lockdownwedding #nikpal.” Take a look at the video and the pictures below! 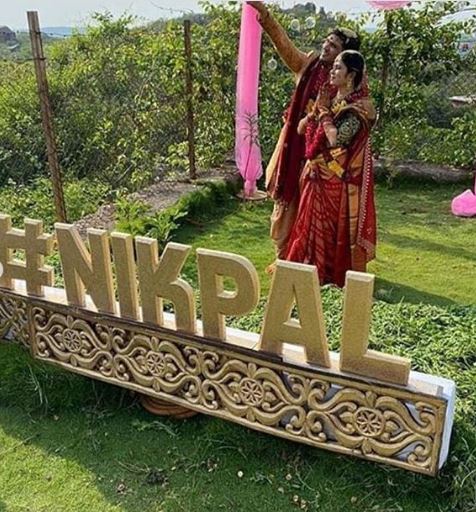 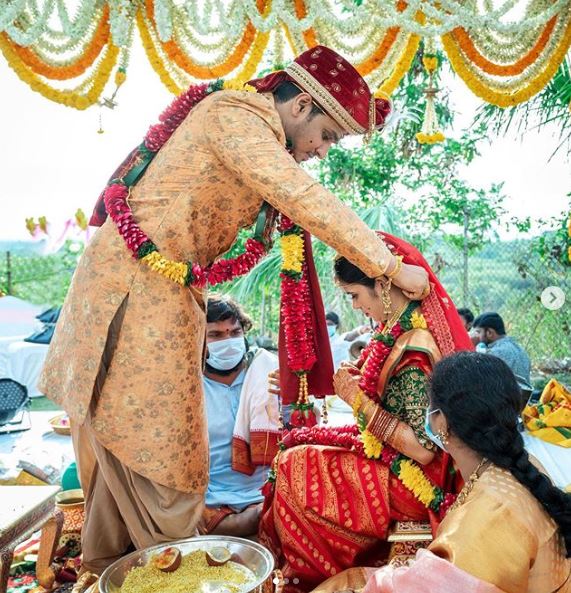 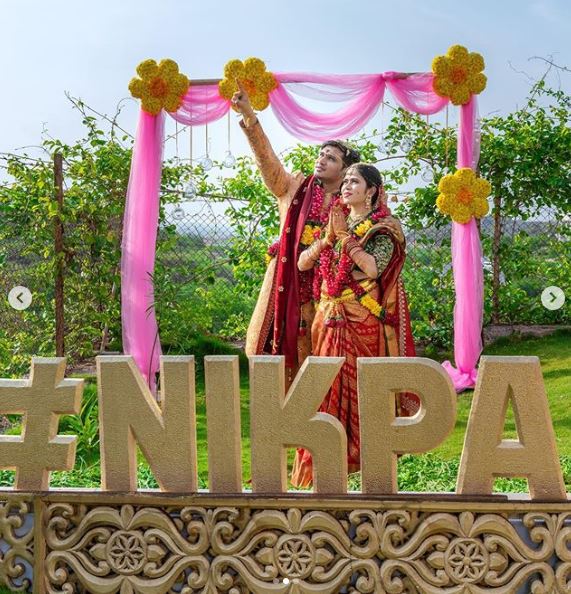 Last year, in a chat show with Lakshmi Manchu, Nikhil had revealed a lot of secrets about his relationship with his ladylove, Pallavi. He had said, "I have someone special in my life now. She is a doctor. She is very understanding, she never disturbs me when I'm shooting or out with my friends. She will not check my phone. She says 'chill whenever you want' and understands that everyone needs their own space, which is what I like the most." When the actor was asked, how they deal with their relationship? The actor had explained that it’s a simple trick that is realising the importance of giving space to your partner. He had said, "Couples need to give space to each other, it is very important." (Also Read: Shah Rukh Khan Proves To Be The Best Father As He Lovingly Holds His Firstborn In This Throwback Pic) 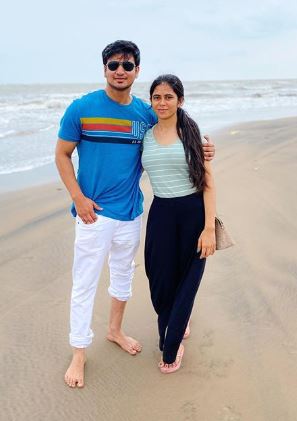 Here’s congratulating, Nikhil and Pallavi for their next journey!