Sanjay Gagnani and his longtime girlfriend, Poonam Preet had got married on November 28, 2021. The couple, who has been in a live-in relationship for a decade now, started a new chapter of their lives. Their wedding was a glamourous affair and the duo had looked extremely happy together. Well, now their fans are going crazy as the pictures from #Poonjaykishaadi are all over the internet!

On November 28, 2021, the wedding pictures from Poonam Preet and Sanjay Gagnani's wedding had surfaced online and we couldn't stop gushing over it! The couple had tied the marital knot in an Anand Karaj ceremony in a gurudwara and had become each other's forever. While Poonam had donned a maroon-coloured unique lehenga, Sanjay had looked dapper in a beige-coloured sherwani, paired with a matching doshala and a turban. Check out the pictures below: 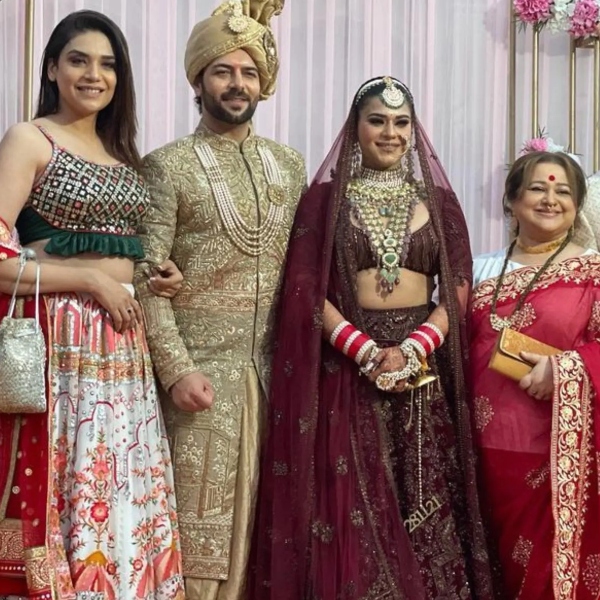 A few moments back, the newly-wedded couple, Sanjay Gagnani and his wife, Poonam Preet took to their respective IG handles and shared their first-ever post after tying the knot. In the pictures, Sanjay and Poonam looked mesmerising in their wedding ensembles, and we can't stop gushing over the cutesy couple. Along with the pictures, they wrote:

In the pictures, Poonam Preet looked gorgeous in her wedding ensemble and her statement jewellery stole the show. She donned a heavy embroidered maroon lehenga, paired with a blouse with a plunging neckline and opted for two net dupattas. She completed her look with multi-coloured stone-studded jewellery, which included a maang teeka, nath, a multi-layered neckpiece and matching earrings. For her makeup, she chose smokey eyes, blushed cheeks, and nude lip shade.

On the other hand, Sanjay looked dapper in a beige coloured sherwani paired with a matching doshala and maroon turban. The excited dulha couldn’t stop dancing as he made a grand entry to the wedding venue. Sanjay danced his heart out and enjoyed the wedding to the fullest. Apparently, the dulha was super-excited to get married to his ladylove, Poonam Preet, and his happiness was evident on his face. Moreover, the groom had caught everybody's attention when he had arrived in a vintage car at his wedding!

Also read: Ankita Lokhande And Vicky Jain's Wedding Date Revealed, Will Have Diverse Themes For All The Rituals

On November 27, 2021, Sanjay Gagnani and Poonam Preet had hosted a glittery sangeet ceremony. For the ceremony, Sanjay had opted for a blue and black tuxedo, on the other hand, his bride-to-be, Poonam had donned a shimmery embroidered blue gown. She had completed her look with glam makeup and open tresses with a tiara on her head. The decor was breathtaking and had featured candle lights all over the place. Sanjay and Poonam had made a dreamy entry at the venue and had caught everybody's attention. Moreover, the couple had set the dance floor on fire with their dance performances.

We wish Sanjay Gagnani and Poonam Preet a very happy married life ahead!

Don't miss: RJ Anmol Sings A Song To Make Son, Veer Sleep, His One-Year-Old Singing Along Is Too Cute To Handle