Sonam Kapoor's hubby, Anand Ahuja bagged the title of 'Best Husband' as he fixed his wifey's shoes in front of the media at an event in Delhi.

Bollywood actress, Sonam Kapoor Ahuja is a style icon, and her fashion game is unbeatable. She got married to businessman, Anand Ahuja in 2018 and shifted her base to London. The couple welcomed their first baby on August 20, 2022, whom they've lovingly named Vayu Kapoor Ahuja. Sonam and Anand are couple goals, and they have been swooning our hearts for more than four years and how.

On November 20, 2022, Sonam Kapoor and Anand Ahuja’s baby boy, Vayu turned 3 months old, and the doting mommy delighted her fans with a cutesy glimpse of her son. She shared an adorable Reel from his first vacation, in which we could see Vayu travelling with his parents and grandparents. From sleeping comfortably in his car seat to taking a stroll, Vayu was seen having a great time. Sonam was also seen kissing Vayu’s forehead, and it simply melted our hearts. She penned:

Recommended Read: Natasha Sharma's Son Looks Cute In 'Kurta-Pyjama' As He Is Peacefully Sleeping In His Mommy's Lap

On November 23, 2022, Sonam Kapoor Ahuja and her hubby, Anand Ahuja graced a store launch event in Delhi. Notably, it was Sonam's first public appearance with Anand post giving birth to their son, Vayu, and the new mommy ensured to make heads turn with her style game. Sonam looked stylish as ever in a Moschino outfit and completed her look with matching black shoes. On the other hand, Anand Ahuja opted for a white t-shirt paired with a brown jacket and trousers.

As the couple was posing for the paps, Anand won everyone's hearts with his cute gesture towards his wife, Sonam. It so happened that the actress was feeling uncomfortable in her shoes, and it was clearly visible on her face. Serving major husband goals, Anand readily helped his wife by fixing her shoelaces, as soon as he noticed her discomfort. Bagging the award for the 'Best Husband', Anand left his wifey blushing. Check it out below:

Meanwhile, Sonam Kapoor's hubby, Anand Ahuja is leaving no stone unturned to become the best daddy to their little one, Vayu. On September 9, 2022, he had taken to his IG handle and shared a picture of the cutesy sneakers that he bought for himself and his boy, Vayu. The stylish pair of sneakers were exactly identical to one another, and it was the perfect gift for Anand's little one. Alongside it, he had penned: 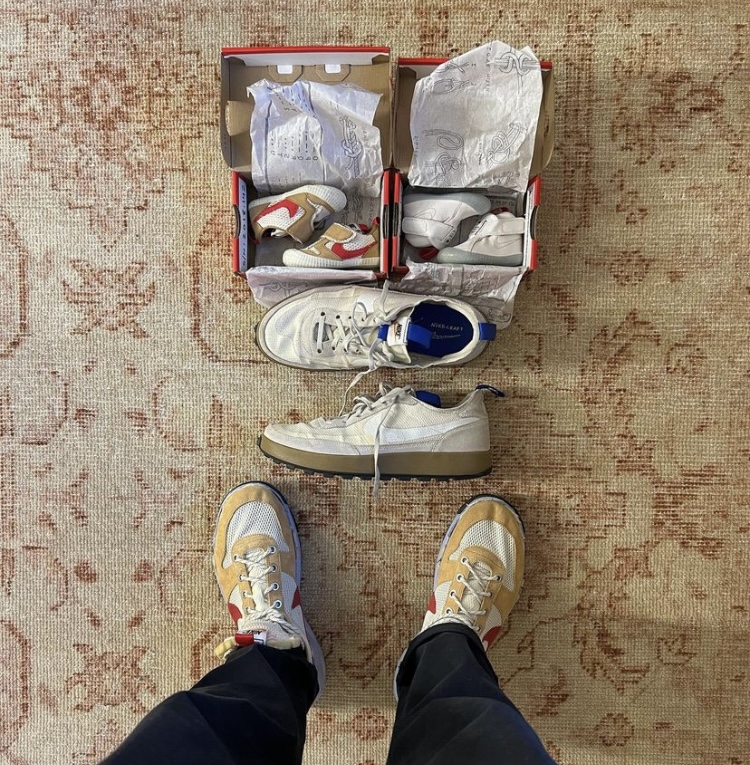 We love the cutesy moment between Sonam Kapoor and her hubby, Anand Ahuja!

Next Read: Vikram Gokhale's Wife, Vrushali Refutes His Death Reports, Reveals He Has Had Multiple-Organ Failure

Sonam Kapoor Flaunts Post-Pregnancy Weight Loss, Gets Back To Shape Within 3 Months Of Vayu's Birth Bollywood actress, Sonam Kapoor Ahuja is currently basking in the glory of motherhood. It was on August 20, 2022, when Sonam and her husband, Anand Ahuja delighted the world with their good news as they welcomed a baby boy into their lives. From talking about her son's natural birth to her breastfeeding