A few minutes back, Neha Kakkar and Rohanpreet Singh surprised their fans by announcing the news of their pregnancy with an adorable picture.

It seems like 2020 is the official year for parenthood as it is raining ‘Good News’ in Bollywood. With Kareena Kapoor Khan-Saif Ali Khan, Anushka Sharma-Virat Kohli, Anita Hassanandani-Rohit Reddy announcing their pregnancy, their fans are eager to see the first glimpse of the star kids. And now, giving a sweet surprise to all their fans, singers, Neha Kakkar and Rohanpreet Singh announced their ‘happy news’ and we can’t keep calm. (Also Read: Krushna Abhishek Shares Lunch Date Picture With His Twin Boys As They Miss Mommy, Kashmera Shah)

It was on October 24, 2020, when Neha had tied the knot with her soulmate, Rohanpreet in a Gurudwara in Delhi. For the wedding, the beautiful bride, Neha Kakkar had ditched the traditional shades of red for her bridal ensemble and had opted for subtle shades of pink. The handsome groom, Rohanpreet Singh had also colour-coordinated his wedding outfit in shades of pastel pink with his bride. Neha's lehenga had heavy golden embroidery work with golden border, a heavy golden maang teeka and a choker neckpiece accentuated her look. Her minimal makeup had won our hearts. Soon after the wedding, Neha had added ‘Singh’ to her name. 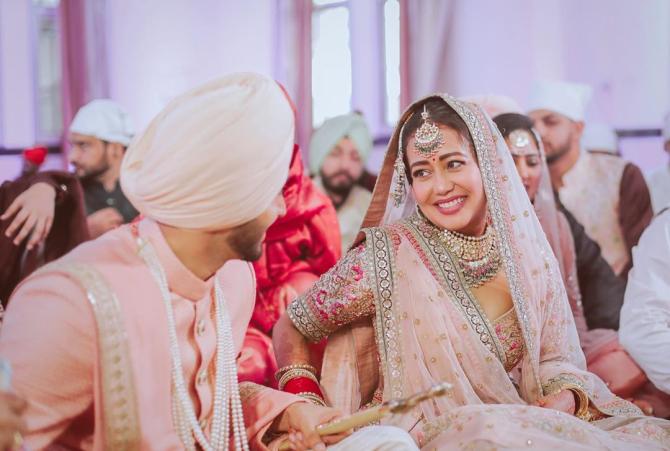 A few minutes back, Neha Kakkar took to her IG handle and announced the news of her pregnancy with an adorable baby bump picture with her hubby, Rohanpreet. In the picture, the soon-to-be parents looked elated as they happily posed for the camera. Neha was seen caressing her baby bump and Rohanpreet hugged her from behind. Neha captioned the picture as “#KhyaalRakhyaKar”. Commenting on the picture, Rohanpreet wrote, “Ab Toh Kuch Zyada Hi Khyaal Rakhna Parhega Nehuuuu.” Rohanpreet shared the same picture on his Instagram handle too. 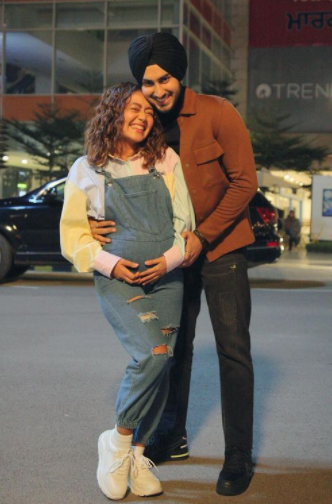 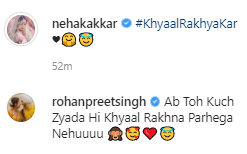 On November 8, 2020, the fashion designer, Anita Dongre had taken to her official Instagram handle and had shared Neha and Rohanpreet's love story. In the long caption, Rohanpreet had revealed the details of their Jab We Met moment and had shared, "We literally met for the first time on the set of the song we did together - Nehu Ka Vyah and I didn’t even realise what she wrote for that song would come true one day. It literally changed my life for the best." (Also Read: Natasa Stankovic Records Her Hubby, Hardik Pandya As He Takes Their Little Boy, Agastya On A Stroll)

Neha too had shared her first impression of Rohanpreet, "My first impression of him was that he was so good to each and every person on the set. And undeniably, he was the cutest boy I had ever come across. The attraction was strong. I think it was really in those initial moments itself that I knew he is the one for me." Rohanpreet had also shared details about the big proposal, "For me it was absolutely love at first sight. She’s one of the most down to earth people I’ve met. One fine day, I mustered the the courage to propose to her and she said yes! Shukar hai mere rabba. Really, thank you, god." Neha and Rohanpreet had jetted off to Dubai on November 8, 2020. While the couple was earlier staying at Palazzo Versace Dubai, a few days later, the couple had shifted to Dubai’s most famous resort, Atlantis, The Palm. Looking at the luxurious pictures shared by Neha Kakkar and Rohanpreet Singh and the grand hospitality of the resort, a TOI report had stated that they couple would have spent approximately 90k per night for their stay in Dubai and it had stunned us. Considering the lavish stay and the array of services Neha and Rohanpreet were offered, the couple had spent approximately Rs 90,000 per night. Isn’t that a whopping amount? (Also Read: 'Diya Aur Baati Hum' Actor, Anas Rashid Welcomes A Baby Boy, Shares The First Pictures Of Him)