Bollywood actress, Neha Dhupia shares a video of her daughter, Mehr sucking her thumb while sleeping with daddy, Angad Bedi is the cutest video on Instagram reels so far. Take a look! 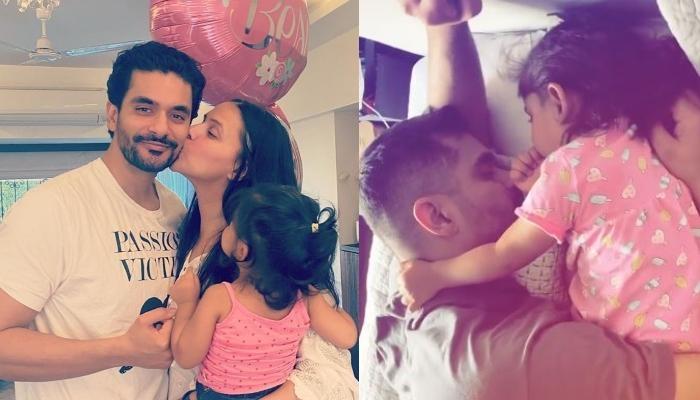 Bollywood celebrities, influencers, and people have started beating the nostalgia of TikTok by using Instagram reels. The new feature introduced yesterday and since then, we have seen tons of videos already on Instagram reels. One such celebrity is Bollywood actress and doting mommy, Neha Dhupia, who has started sharing videos on Instagram reels. But one of the best videos that she has shared so far is of her husband, Angad Bedi and daughter, Mehr Dhupia Bedi giving us major father-daughter goals. (Recommended Read: Neetu Kapoor's Birthday Party Saw Ranbir Kapoor, Riddhima Kapoor With Karan Johar [Pics Inside])

We have already seen Neha Dhupia's Instagram filled with her daughter, Mehr's pictures and little videos and there's no doubt that her reels locker is also going to be hijacked by the little angel soon. Please scroll down to see the adorable video that also gives us major sleeping goals! 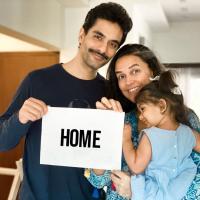 On July 8, 2020, Bollywood actress, Neha Dhupia took to her Instagram reels and uploaded an adorable video in which we can see her hubby, Angad Bedi sleeping with their daughter, Mehr Dhupia Bedi. The daddy-daughter duo is looking not less than a dream as the doting dad has hugged his baby angel, while she's in half-sleep and playing with her dad while sucking her thumb. The cutesy video is simply adorable in all senses, along with this video, Neha Dhupia wrote a little caption, and it could be read as "#feelitreelit ... my... @angadbedi @mehrdhupiabedi." Take a look. (Don't Miss: Dipika Kakar Ibrahim's 'Nanad', Saba Ibrahim Praises Her 'Bhabhi' For Baking Expert-Level Cakes)

For the uninitiated, Bollywood celebrities, Angad Bedi and Neha Dhupia had gotten married in a hush-hush ceremony on May 10, 2018, in a Sikh wedding. No one had a clue about these two, even dating each other, let alone their secret wedding. It was only when Karan Johar had wished them through his official Twitter account and had shared the picture from their Gurudwara wedding that everyone. After which, everyone had come to know about Neha and Angad's affiliation. Six months into their wedding on November 18, 2018, they had welcomed their cotton ball and had named her Mehr Dhupia Bedi. 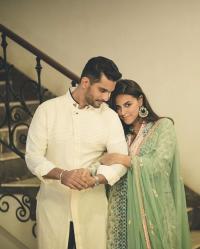 Since then, we have seen Neha and Angad sharing pictures, Boomerangs, and small clips of their daughter, Mehr on their respective Instagram handles. However, on many occasions, their daughter had gatecrashed in their video calls and a glimpse of the same, we have witnessed recently during the online auditions of the popular show, Roadies. On May 27, 2020, Neha had taken to her Instagram handle and had posted a video from the live audition, and in the video, we could see Neha Dhupia and her co-judge, Nikhil Chinapa auditioning a contestant and in the middle of the audition, the actress' little baby, Mehr had cutely entered into the frame. Neha had tried her best to make her leave, and while doing it, she had gotten a little bit emotional too. The actress had written her work-from-home experience in the caption that could be read as "#BUSTED !!! ... #workfromhome gets real!!! Especially when your daughter walks into a live audition and decides to pull your earrings and wants her mama back to play!!! Once a reality show always a reality show. #roadiesrevolution #gangneha #worklifemeetsmomlife." Check it out below:

On May 18, 2020, Neha's little munchkin had turned one-and-a-half-year-old, and the gorgeous mommy had taken to her Instagram handle to share the happy news. She had posted a collage of pictures of little Mehr, and we had loved the little princess' outfit. Alongside the collage, Neha had written, "And just like that our baby girl is 1 1/2 years old", followed by a heart emoji. (Also Read: Anushka Sharma Reveals How Her 'Darling Hubby', Virat Kohli Ensures 'Measured Eating' In Their House) Do you like Neha's video featuring Angad and Mehr? Let us know!