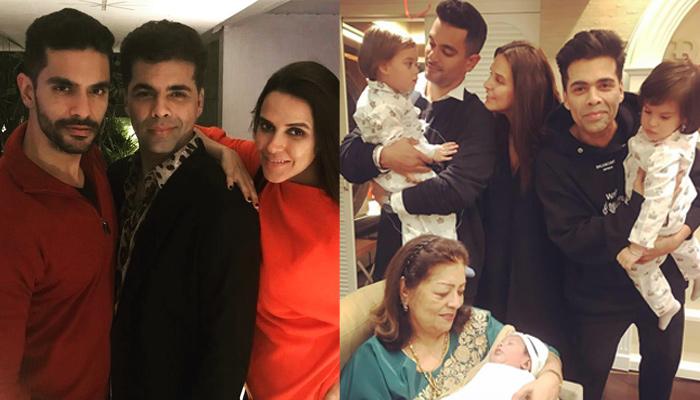 The year 2018 had a lot to offer to one of the most stunning actresses of the B-town, Neha Dhupia. With tremendous personal and professional gains in her kitty, we can undoubtedly say that 2018 was the year of Neha Dhupia. Having witnessed her as a judge and chat show host in her professional life, personal life had in store for her, the real life role of being a wife and a mother at the same time! (Do Read: Karan Johar's Twins Yash And Roohi Can't Stop Dancing When He Sings 'Happy Birthday' For Them)

Yes, to give you all a 2018 flashback into Neha Dhupia’s life, the Singh Is King actress married her ‘best friend’, Angad Bedi on May 10, 2018, and after 6 months of marriage, Neha and Angad became proud parents to a baby girl, Mehr Dhupia Bedi on November 18, 2018. Sharing the good news with all fans, the doting daddy wrote, “The last two days have been very overwhelming. @NehaDhupia and me have been blessed with a beautiful baby girl. Thank you all for your wishes and love that is coming our way. Both my girls are doing really well.”

Speaking about Neha and Angad’s wedding, do you know who was the first Bollywood celebrity to have informed the world about the duos marriage? It was none other than Neha’s close pal from the industry, Karan Johar! And today (February 07, 2019), is Karan Johar’s twins- Yash and Roohi’s second birthday and on account of the same, Neha posted adorable pictures, wherein Karan and Angad are seen carrying Yash and Roohi on their arms, with Karan’s mother, Hiroo Johar lovingly looking at a sleeping baby Mehr! Sharing the pictures, the No Filter Neha host wrote an adorable birthday message on behalf of Mehr, “#happybirthday my dearest Roohi and Yash ... I still remember the first time we met and both of you screamed out loud ... “bbbbaaaaabbbbbyyyyyy”.... I may not be joining you for your birthday celebrations this time as I will be busy... but I promise I’ll create havoc with you very very soon... @mehrdhupiabedi.”

Aren’t the pictures adorable? Neha Dhupia recently grabbed the headlines when she, hubby Angad and a couple of her friends lashed out at an article which fat-shamed the actress after she gained post-pregnancy weight. While we will share with you a screenshot of the article below, Neha took to Instagram and sharing a beautiful post-pregnancy picture of herself, wrote, “I don’t owe anyone an explanation because fatshaming like this doesn’t bother me one bit. But I do want to address this as a larger problem because fatshaming needs to stop for EVERYONE not just celebs. As a new mom i want to be fit, healthy and energetic for my daughter. So I work out everyday, sometimes twice a day because for me...’Fitness’ is a priority and not ‘fitting into’ society’s standards regarding looks. And I hope in the future people are kinder to each other while making such vapid and vile comments. To quote @pattonoswalt ... “Be Kind. It’s chaos out there.”

Neha’s B-town BFF, Karan Johar retweeted her lash-out tweet and wrote, “Neha! You are an amazing Woman! You walk so many paths with humour...with intelligence and with abandon! It’s never about losing weight it’s always about gaining perspective! And I hope the woman who wrote this has gained some today....” Checkout a screenshot of the same here: (Must Read: 'Shagun' Fame Surbhi Tiwari At 38 Is All Set To Get Married With Businessman Fiance, Details Inside)

On December 01, 2018, Neha had shared a super-adorable picture of a father-daughter moment. In the picture, you will see the doting daddy, Angad Bedi fast asleep with his baby Mehr, sleeping on her back on his tummy! A mere look at the picture and you go all ‘awww’ with an extra dollop of cuteness that the picture comes with. Here’s the image:

Like any modern woman who considers pregnancy as a further boost to work harder, Neha has been totally working in an out. Speaking about balancing work and pregnancy, the Lust Stories star had shared with PTI, “A lot of people think that when you are in a situation, especially the one I’m in, there are lots of people who work and caution around you and it is wonderful to see that love and care. I represent a certain section of women who believe in working.” She further added, “When I come out and work, I feel even better about it. As a couple, we don’t make a big deal out of anything which is also great. People are like ‘Oh my god. You should now go home and look after yourself’. They have been very supportive”.

During Neha’s pregnancy phase, Angad was all praises for his wife. Speaking about the same, he had shared, “There are many firsts this year. We got married and now we are having a baby. It is a very enriching experience for me to be married to such a strong girl. I feel the credit should not be given to her. It should be given to her mother who has raised her and she talks about her very highly.” (Also Read: Neeti Mohan And Her Bridesmaids Posed Wearing Nihaar's Masks, His Reaction Is Too Amazing)

Guys, what thoughts do you have about being a working mommy? Keep us posted!