Bollywood actress, Neha Dhupia made a special cake for her 'darling hubby', Angad Bedi and their little munchkin, Mehr Bedi. Scroll down to see her cute pictures!

The COVID-19 outbreak is our worse nightmare that has turned into reality. It is like a scary fiction film that has gotten real. For the first time ever, offices are closed, roads are deserted and there is no place to go, everyone is locked inside their homes for 21 days. The pandemic has taken more than 75,000 lives and we wonder how many more to go until we find the cure for it. In these testing times, staying calm is really important and maybe that's the reason why people have gone the traditional way and cooking things on their own. And Bollywood actress, Neha Dhupia also wore a baker's hat to bake a yummy cake for her darling hubby, Angad Bedi. (Recommend Read: Quarantine Updates: Divyanka Tripathi Cooks Mouth-Watering Thai Food For Husband, Vivek Dahiya)

Before, we take you further into the story, let us take a look at Neha and Angad's love story. The duo had met each other when they were not even part of the film industry, Angad used to play in the under-19 cricket team while Neha was prepping for Miss India pageant. For the actor, it was love at first sight. And in the year 2018, they had shocked everyone when they had shared their marriage news. Later, came another sweet surprise when Neha had announced that she is pregnant and on November 18, 2018, the duo was blessed with a baby girl, whom they lovingly named, Mehr Dhupia Bedi.

Since then, Neha and Angad's life has been revolving around their munchkin. On April 7, 2020, Neha took to her Instagram stories and shared how she baked a cake for her family. In the Instagram stories, Neha can be seen baking the cake and enjoying the process. However, the end result definitely looked drool-worthy. Check it out below: 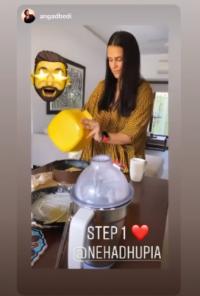 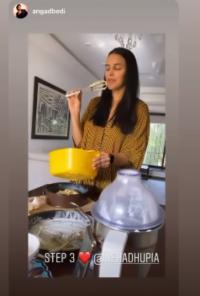 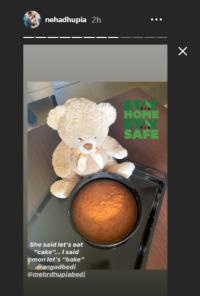 Coming back to their love story, in an interview with the Bombay Times, Angad had shared the whole story. He was quoted as saying, "When I used to play Under-19 cricket in Delhi, during a gym session, I spotted this girl in really tiny shorts. I was impressed with her running technique. I figured out that her name was Neha Dhupia and that she was preparing for the Miss India pageant. Then, many years later, we met in Mumbai and became friends. I was interested in her, but she said that she wanted to be just friends. We have both been in relationships with other people and there has never been a facade. When it comes to spending the rest of your life with someone, you should do it with a friend. It doesn’t matter if that person is illiterate, educated or earns `10 or `10 crore. Eventually, these things don’t matter." (Also Read: Charu Asopa Sen Gives It Back To The Trollers Who Wrote Nasty Comments On Her Pictures With Hubby) 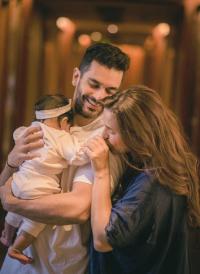 However, Neha took her own sweet time to say 'yes' to the man of her dreams. In the same interview, she had shared, "Our friends knew that Angad had feelings for me, but it was one-sided, till I came around. He had proposed marriage to me four years ago, but I turned down his proposal at that time because I was in a relationship. He came back four years later and said that I had wasted four years of his life." (Don't Miss: Smriti Khanna Reveals Her Due Date And How She's Spending Her Last Pregnancy Days With Hubby, Gautam)

Well, we love the yummy cake made by Neha! 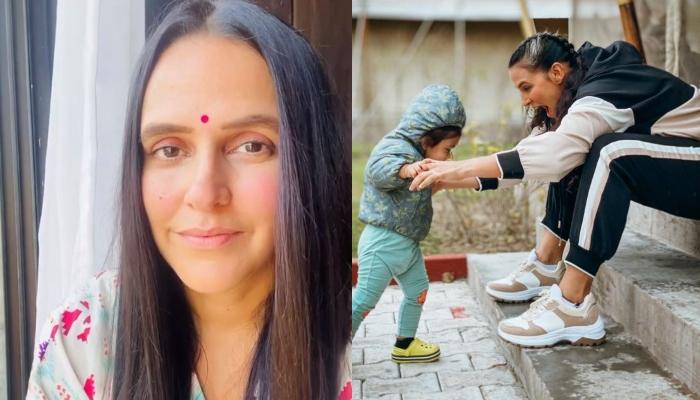