Neha Dhupia and Angad Bedi decided on ‘happily ever after’ in an intimate ceremony on May 10, 2018. The hangover of the wedding season after #SonamKiShaadi continued when former Miss India, Neha and Tiger Zinda Hai actor, Angad pleasantly surprised everyone, including their friends from the industry, about their secret wedding. (Also Read: Newbie Bride Neha Dhupia's Hubby Angad Bedi Reacts To Her Pregnancy Rumours)

As soon as Bollywood’s ace director, Karan Johar announced Neha and Angad’s wedding on social media, it left B-town celebs sweetly surprised with the news. And since their wedding was kept secret, the wedding party for their friends from the B-town was also impending. So, on June 6, 2018, Neha and Angad hosted a dinner party and their close friends including Karan Johar, Satyadeep Misra, Dia Mirza with her husband, Sahil Sangha, Soha Ali Khan with hubby Kunal Kemmu and Yuvraj Singh attended the bash. 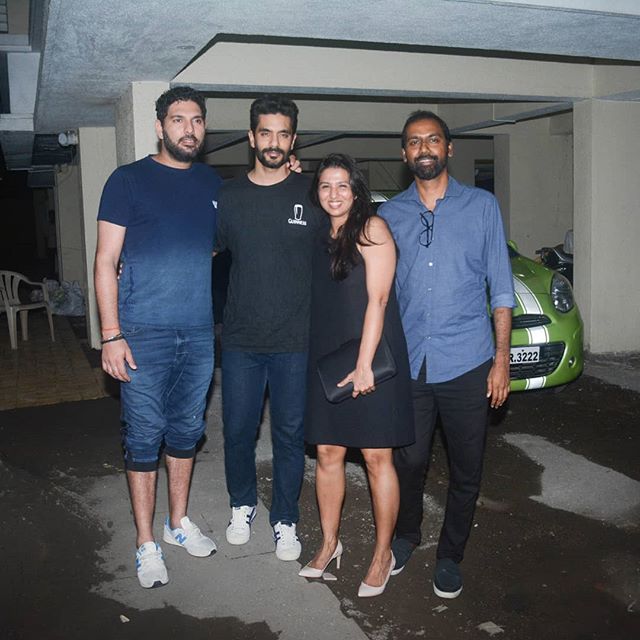 While Dia Mirza twinned in a black outfit with her hubby, Sahil Sangha, Karan Johar opted for a monochrome look with basic tee and pants which he paired with a printed jacket. Soha Ali Khan arrived in a printed floral black front-slit dress and her husband, Kunal Kemmu kept it casual in blue shirt and denim. Yuvraj Singh made a solo appearance at the party. (Also Read: Neha Dhupia Never Wanted To Date An Actor, Let Alone Marry, But Ended Up Marrying One, Here's Why!) 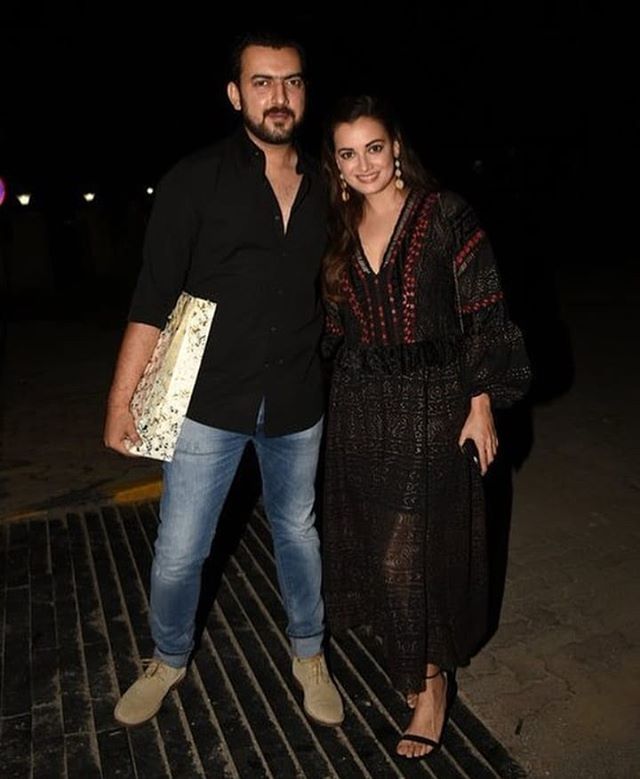 Karan Johar, who was the only one from the B-town who knew about Neha Dhupia and Angad Bedi’s wedding, shared a picture from the evening, and captioned it, “#NEHANGAD @nehadhupia @angadbedi @instasattu #amrit #ninna” 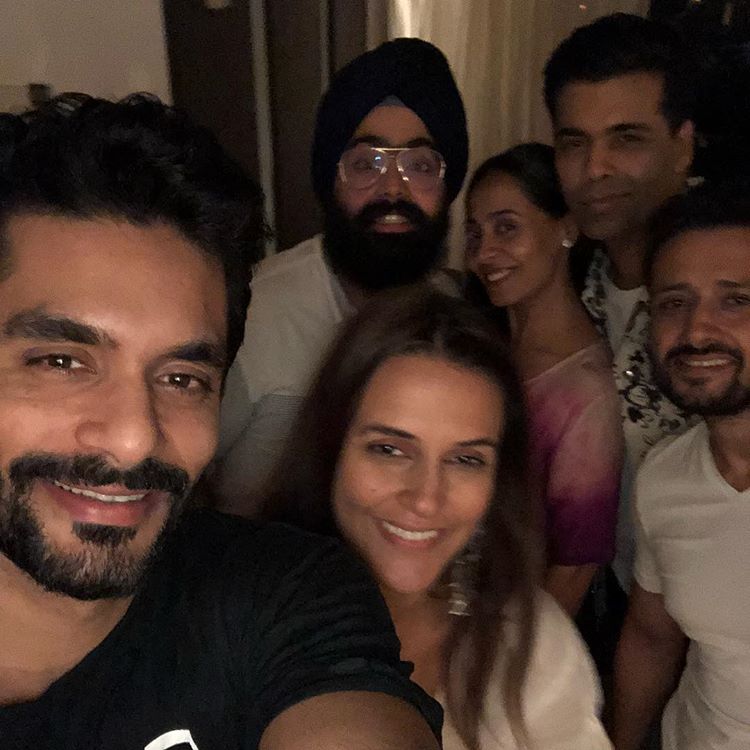 Neha Dhupia posted the following picture of the special gift they received from Karan Johar. Earlier, Angad stated that they were planning to throw a lavish star-studded wedding reception for their friends from the industry. He said, “Between Neha and me, we know around 1400-1500 people. In order to accommodate all of them, I have to ask Neha for her dates. She’s away travelling; she has taken a trip to Gulmarg. We will plan something when she comes back. She will be here in two days and we will call everyone after that.” In an interview with the Bombay Times, Soorma actor Angad revealed his one-sided love chronicle and shared, “When I used to play Under-19 cricket in Delhi, during a gym session, I spotted this girl in really tiny shorts. I was impressed with her running technique. I figured out that her name was Neha Dhupia and that she was preparing for the Miss India pageant.” (Also Read: Angad Bedi Proposed Neha Dhupia 4 Yrs Back But She Rejected It, Here's Their Complete Love Story!) 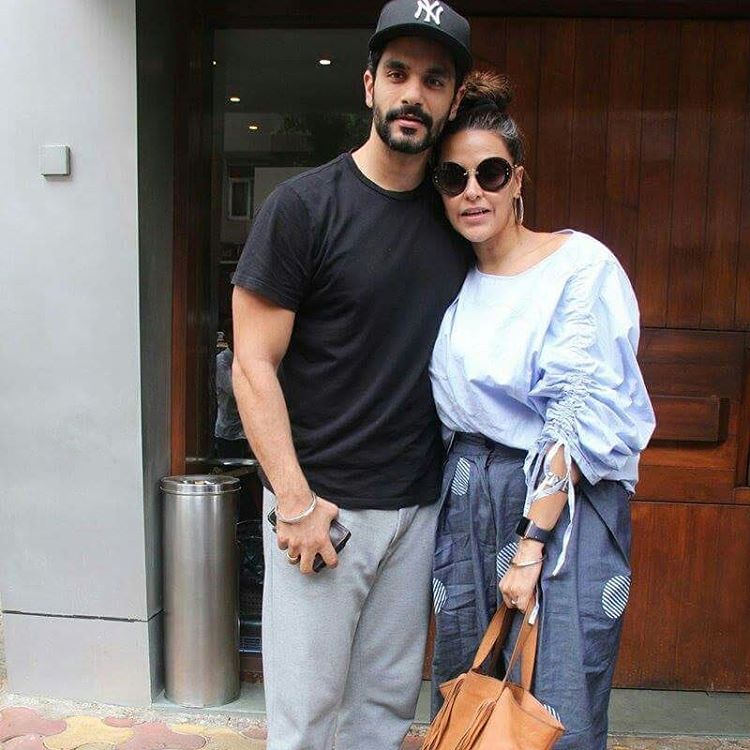 He further went on to say, “Then, many years later, we met in Mumbai and became friends. I was interested in her, but she said that she wanted to be just friends. We have both been in relationships with other people and there has never been a facade. When it comes to spending the rest of your life with someone, you should do it with a friend. It doesn’t matter if that person is illiterate, educated or earns `10 or `10 crore. Eventually, these things don’t matter.” (Also Read: Hubby Angad Bedi Harshly Slams A Troll Who Wrote A Filthy Comment About Wifey Neha Dhupia) 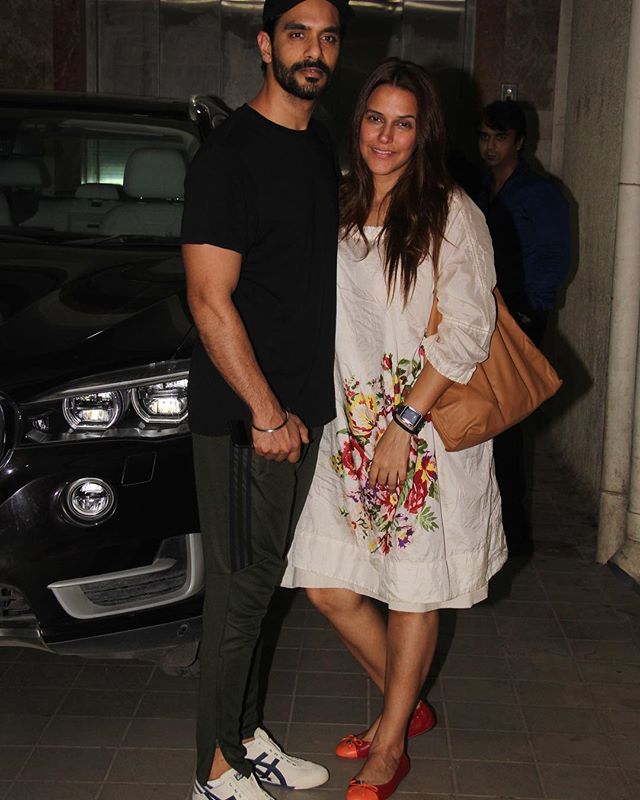 Sharing her side of the story, Neha asserted, “Our friends knew that Angad had feelings for me, but it was one-sided, till I came around. He had proposed marriage to me four years ago, but I turned down his proposal at that time because I was in a relationship. He came back four years later and said that I had wasted four years of his life.” 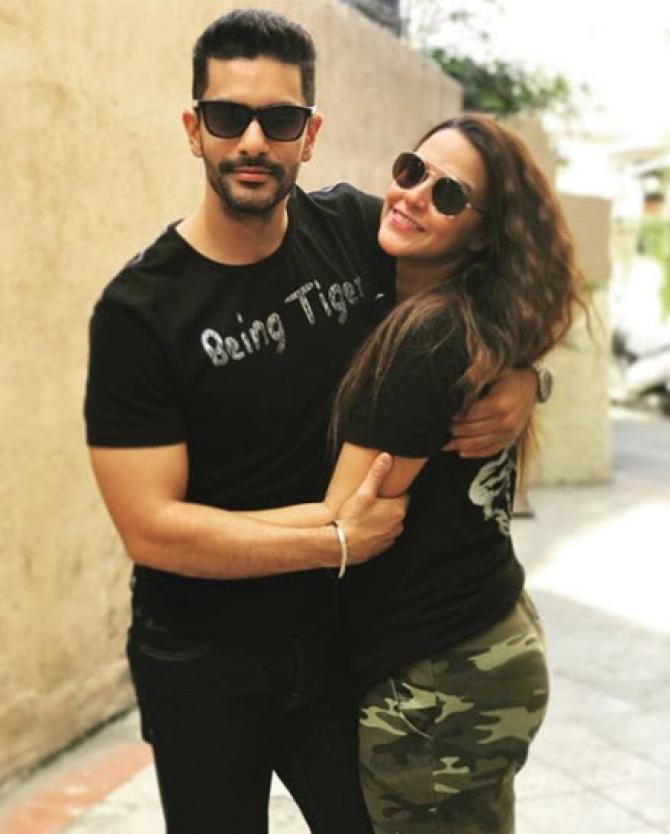 She further continued, “He said, ‘I don’t want to be just in a relationship with you. Either you are my wife or nothing’. I always believe in one thing — the right time and place. In the past four years, I have seen a huge change in him. He has matured a lot. In the end, everything else goes flying out of the window and friendship is all that matters. I can promise you that we aren’t going be a couple who will post a lot about ourselves on social media.” (Also Read: Newly-Wed Neha Dhupia Was Asked To Tie Rakhi To Hubby Angad Bedi, She Gave An Epic Reply!) Neha revealed that Angad didn’t propose her, instead, he took the marriage proposal to her parents. Neha was quoted as saying, “Angad didn’t propose to me, instead, he went with the rishta to my parents. His mother was not ready to give her nod for the wedding date, till she met me. I met her two days before the wedding and she asked me if I was sure about getting married to him and some other questions, which a to-be mother-in-law would generally ask. As far as his father is concerned, we had got strict instructions from him to keep it low-key or else the press would get a whiff of it and there would be OB vans outside the gurudwara.” (Also Read: Amidst Neha Dhupia's Pregnancy Rumours, Angad Bedi Talks About Life Post-Marriage And Raising A Kid) 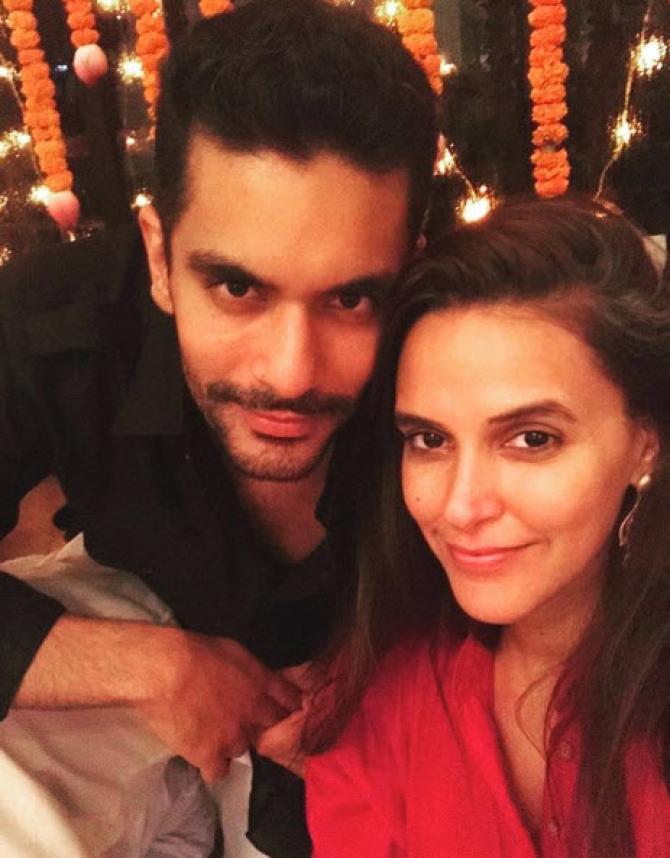 We can’t wait for the couple, Neha Dhupia and Angad Bedi to throw another star-studded wedding reception of the B-town!

Next Read: After Conceiving Inaaya, Soha Ali Khan Brought One Change In Her Diet To Stay In Shape And Healthy