Neetu Kapoor posted an unseen picture of Ranbir Kapoor and Alia Bhatt and their fans commented that the photo was taken when Ranbir had proposed to Alia.

It is celebration time at the Kapoor and Bhatt clan as Alia Bhatt and Ranbir Kapoor are expecting their first baby. After their hush-hush wedding on April 14, 2022, Alia and Ranbir had surprised their fans by announcing their pregnancy two months post their wedding. Since then, their fans are delighted and are hooked to social media for more details.

Also Read: Rakhi Sawant Shares Her Desire To Become A Mother, Reveals The Baby Can Come Even Before Marriage However, Ranbir and Alia’s fans couldn’t help but notice Ranbir holding a box in his hand in the picture, while Alia’s happiness was unmissable too. Soon, netizens started speculating that the picture was taken when Ranbir had proposed to Alia. Many users pointed out Ranbir’s hand carrying the box.

For the unversed, it was on June 27, 2022, when Ali Bhatt had taken to her IG handle and had surprised everyone by announcing the news of her pregnancy. She had posted two pictures, where the first picture had featured Alia and Ranbir in the hospital, having her sonography done, and looking at the monitor, beaming with happiness. The second picture had consisted of a lion and lioness along with a cub. Along with the pictures, Alia had written: Moments after Alia had announced her pregnancy, Neetu Kpaoor was papped by the shutterbugs. In her signature style, Neetu Kapoor had asked the paps, “kaise hain aaplog” and they had said, “Neetuji congratulations”. When she had inquired, “for what”, they had responded, “dadi benne waale ho aap.” Listening to the news, Neetu Kapoor had smiled slyly and had said thank you. Her reaction was indeed priceless.

Ranbir’s sister, Riddhima had also taken to her IG stories and had posted an adorable picture of the couple. Along with it, she had penned a heartfelt note for her bhai and bhabhi to congratulate them. Her note could be read as:

“My babies are having baby. I love you bot so much. @aliabhatt #Ranbirkapoor.” 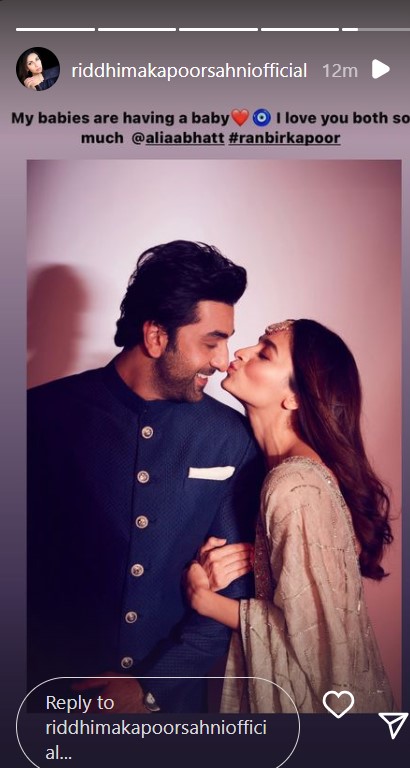 What are your thoughts on Ranbir and Alia’s picture? Let us know.

Mom-To-Be, Alia Bhatt Is Getting Neetu Kapoor's 'Nuskhe' And Family's Pampering In Her 2nd Trimester Bollywood actress, Alia Bhatt is loved by many, courtesy of her humble nature, beautiful smile and her brilliant acting skills. It looks like yesterday when Alia made her Bollywood debut with the film, Student Of The Year, and etched her place in our hearts in no time. However, over the