On the death anniversary of Krishna Raj Kapoor, her daughter-in-law, Neetu Kapoor shared an all-smiles selfie along with a heartfelt message for her mother-in-law, whom she loved more than a mother. 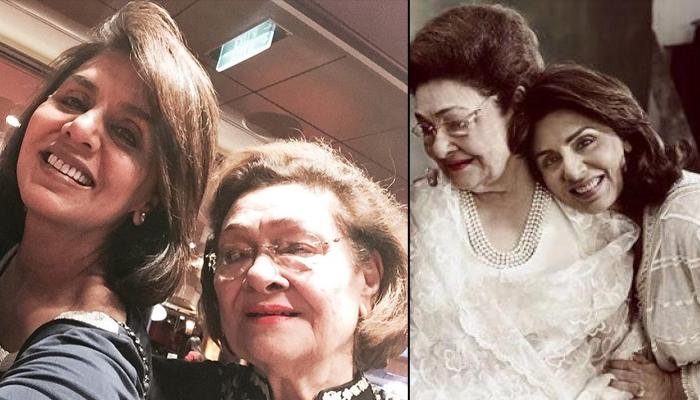 Raj Kapoor had tied the knot with Krishna Malhotra at the age of 22 in 1946 in an arranged marriage set-up and she selflessly supported her husband throughout his professional journey. Together they have 5 children- three sons, Randhir Kapoor, Rishi Kapoor and Rajiv Kapoor and two daughters, Ritu Nanda and Rima Jain. But not only that they were blessed with such doting children, Raj Kapoor and Krishna Raj Kapoor were more-than-lucky as they had such affectionate daughters-in-law and sons-in-law.

More than the sons themselves, the Kapoor bahus have, time and again, shared how much they admire their mother-in-law, Krishna Raj Kapoor. To prove the same, we have Neetu Kapoor’s heartfelt post for the death-anniversary of her mother-in-law. Captioning a selfie with her, Neetu ji wrote, “Loved her more than a mother!!! it’s been a year since she left us I still feel she is around she will always stay in my heart with some wonderful memories. I have never or will meet anyone like her!!! No malice no negativity only LOVE.” Even Krishna Raj Kapoor’s grandchildren, Riddhima Kapoor Sahni and Armaan Jain posted lovely pictures, remembering their grandma. Check out all the posts here:

It was on September 29, 2018, when the world had a slight hint that Rishi Kapoor might be suffering from some serious ailment. And just two days later, on October 01, 2018, Rishi ji’s mother, Krishna Raj Kapoor had breathed her last. Rishi Kapoor, Neetu Kapoor and Ranbir Kapoor weren’t present in India for Krishna Raj Kapoor’s last rites as they were off to New York for Rishi ji’s cancer treatment. As sad as it seems, the entire family wasn't available to bid a final adieu to Krishna Raj Kapoor. (Also Read: Unknown Facts About Krishna Raj Kapoor And 9 Other Kapoor 'Bahus' And Their Husbands)

And since Neetu Kapoor couldn’t attend her mother-in-law, Krishna Raj Kapoor’s last rites, she had written a eulogy for her ‘best friend’ and had shared a lovely picture with her. Neetu ji had captioned the following picture on her Instagram as “She was such a huge influence in my life admired her elegance with generosity and warmth!!! She will always stay in my heart #noonelikeher #besthumanbieng #lovedher #bestfriend.”

Many pictures and videos of the entire B-town standing by the Kapoors like a rock were available on the internet from Krishna Raj Kapoor’s funeral. While every celeb was doing their active part, all were surprised by probable soon-to-be Kapoor bahu, Alia Bhatt. She had stood by her beau, Ranbir Kapoor’s family like a pillar of strength during such a difficult time, video-called him during the funeral as he was away and was there, by her alleged to-be sister-in-law, Riddhima Kapoor Sahni and the duo were spotted getting all teary-eyed.

In an interview with The Times of India sometime back, Rishi Kapoor had expressed his feelings for not being able to attend his mother’s funeral. The doting son had remarked, “That was very unfortunate. I left for the US on September 29, and my mother passed away on October 1. She knew that I had contracted a serious disorder. That entire period was traumatic for me. I was caught up with my problem. I didn’t know what to do, and I didn’t have an option because I had to be here in New York. My brother told me that by the time I would get back, it would be too late. Also, I didn’t have the stamina or strength to come back.”

Speaking about the equation with her in-laws, Neetu Kapoor had once stated in an interview, “They've always been family. If I'd been fake with them, they would have seen through me. If I have an issue of any kind with any one of my in-laws, I don't let that fester within me. My mother-in-law (Krishna Raj Kapoor) treats me like her daughter. Reema, my sister-in-law, has been a buddy even before I got married.” (Also Read: Raj Kapoor's Love Life: Krishna Kapoor Left The House Once Because Of His Affair With Vyjayanthimala)

Rest in peace, Krishna Raj Kapoor, until next time…