Neetu Kapoor shared a video on her IG handle from the time when she was just 8 years old, and her future-samdhan, Soni Razdan reacted to it in the cutest manner!

Alia Bhatt and Ranbir Kapoor’s love story needs no introduction. We have been in love with them as a couple for years now and are desperately waiting to see them tie the knot. However, for Ranbir and Alia, their marriage will just be a formality as the two have already become a part of not just each other’s lives, but also each other’s families. Over the years, Alia has become a part of the Kapoor Khandaan and has been a part of the Kapoor family’s festivals and functions. Similar is the case with Ranbir Kapoor as he is often spotted spending time with Alia’s mother, Soni Razdan and sister, Shaheen Bhatt.

Remember when Ranbir Kapoor’s and Alia Bhatt’s families had gone to Ranthambore to ring in the New Year 2021? On that trip, we had witnessed Ranbir Kapoor, playing the role of an obedient damaad as he had accompanied his future saasu-maa, Soni Razdan, saali, Shaheen Bhatt and girlfriend, Alia Bhatt on the safari ride. In the picture, we could see Soni, Alia Bhatt and Ranbir Kapoor following the guidelines of COVID-19 as they could be seen wearing masks. Ranbir’s sister, Riddhima Kapoor Sahni had also shared a picture of the Kapoor-Bhatt family together on her IG stories as their trip had come to an end. The Kapoors and Bhatts have accepted each other and we love to witness their social media banters. This time, the two samdhans, Neetu Kapoor and Soni Razdan displayed their affection for one another. Taking to her IG handle, Neetu Kapoor shared a video from the time when she was 8 years old and was a child actor in the film, Do Kaliyan. Neetu shared a clip, where she was enacting a song from the film and mentioned that during those times a lot of makeup was baked on the actor’s face. She wrote, “#dokaliyan thopoed a lot of make up though.”

On Neetu Kapoor's post, her future-samdhan, Soni Razdan shared her views on how Neetu has not changed a bit since that time. Sharing how Neetu was cute then and is cute even now, she wrote, “Omg. You haven’t changed a bit you know ! Cute then and now.” Neetu Kapoor’s daughter, Riddhima Kapoor Sahni also commented on her mommy’s post and wrote, “Cutest !!!!!!” Neetu's niece, Kareena Kapoor Khan’s nanad, Saba Ali Khan too dropped a comment on her post and wrote, “My favourite movie Neetu aunty. Do kaliyan…. addicted back then… stay safe.” 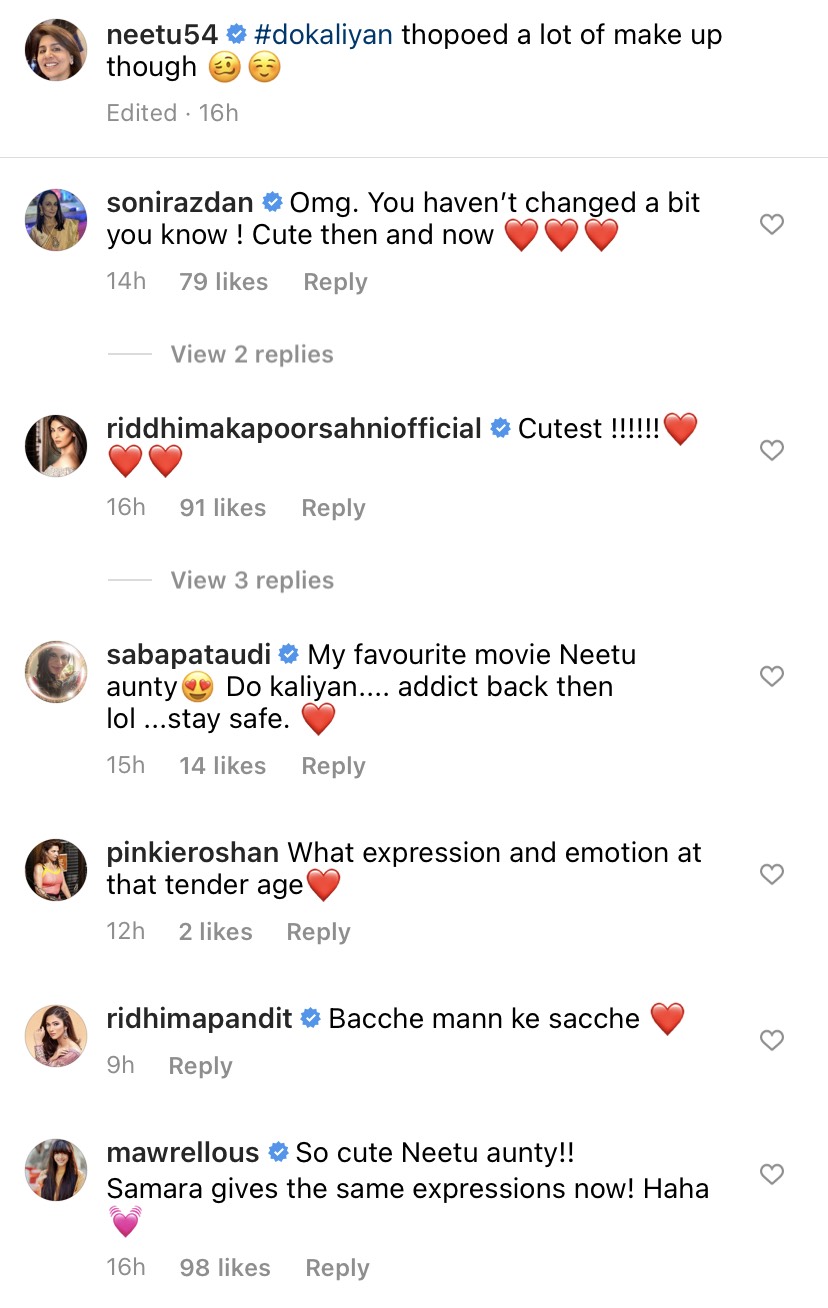 A few days back, we had witnessed saas-bahu love as Neetu had shared a few beautiful pictures of herself on her IG handle. Neetu had visited the sets of the reality show, Indian Idol and had shared a few pictures, flaunting the outfit that she had worn for the show. The radiant glow and the flawless smile had looked great on Neetu and her future bahu, Alia Bhatt could not help but appreciate her. She had commented on her post, “So prettyyyyyyy” followed by four heart emoticons. Neetu's samdhan, Soni Razdan had also commented on her post and left perfect, heart and awestruck emoticons. 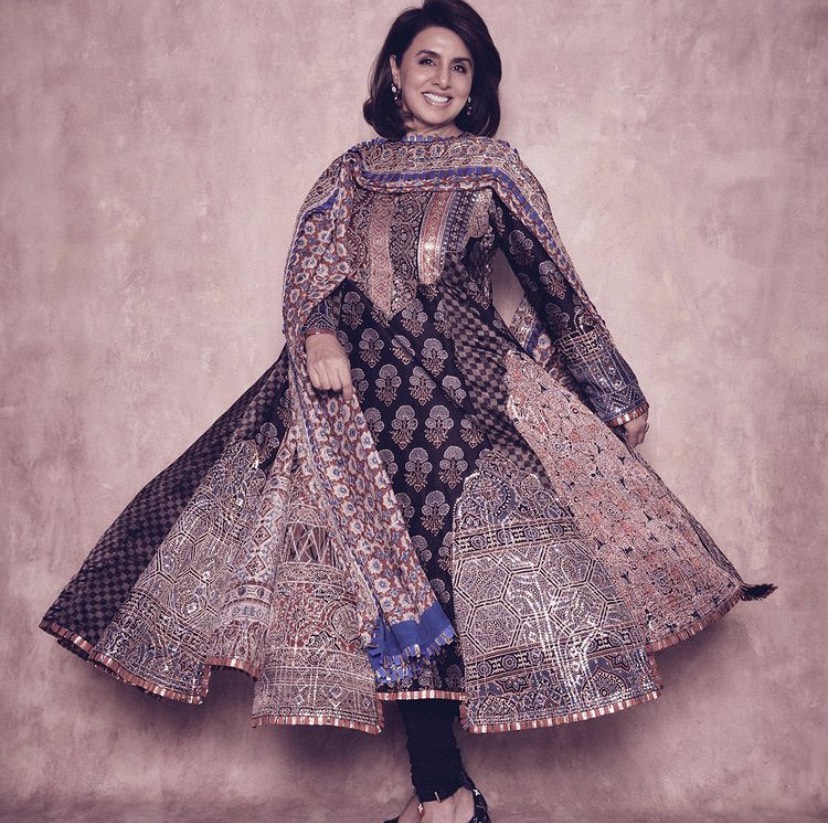 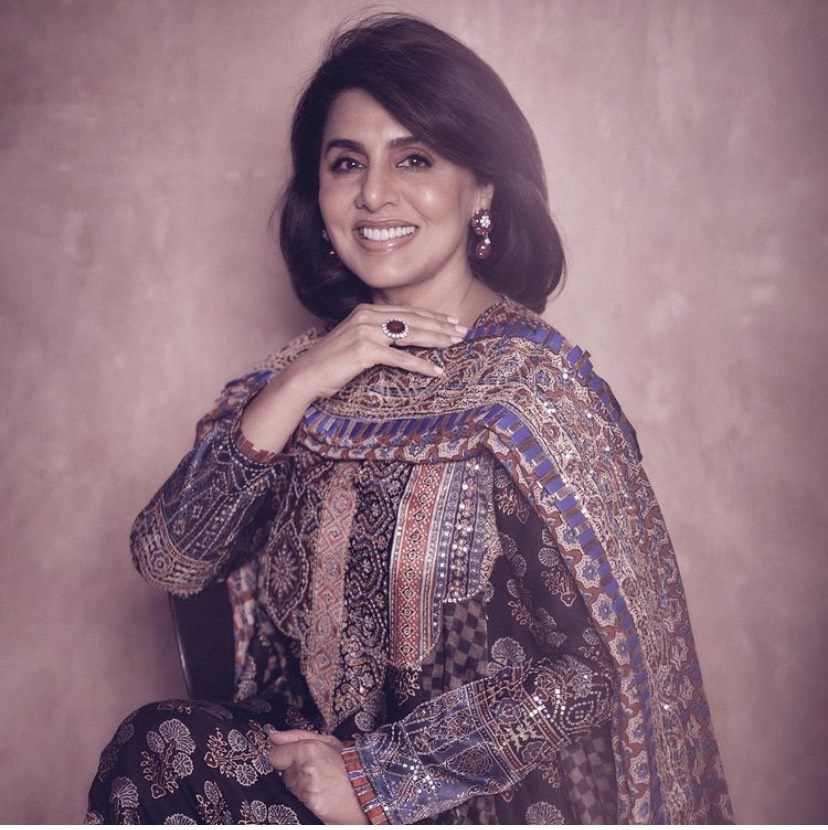 On March 15, 2020, Soni Razdan had taken to her Instagram handle and had posted two throwback pictures of her daughter, Alia Bhatt from the memory lane on her 27th birthday. In the first picture, we could see Soni Razdan looking beautiful in a black top paired with blue jeans and little Alia looking like a cotton ball in her frock with a wide smile on her sweet little face. In the second picture, we could see Alia in the arms of her mother as both of them had posed for the camera. It was Neetu Kapoor’s comment that had taken all the limelight as it could be read as "Awww adorable happy birthday.” 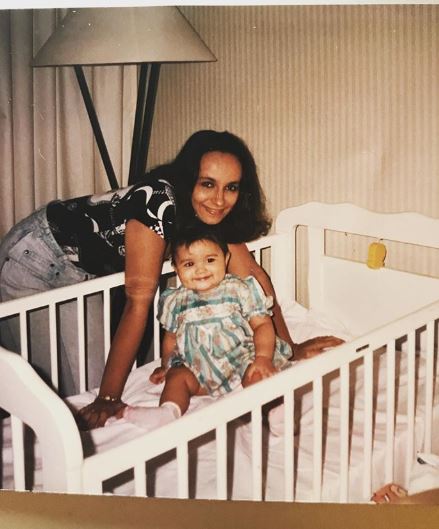 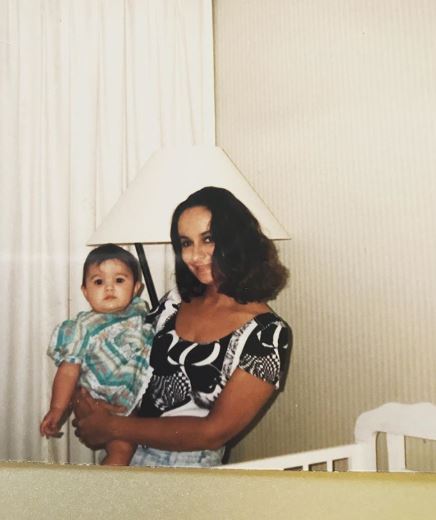 The Kapoors and the Bhatts are totally giving us perfect family vibes!