Throwback to when Olympic gold medalist, Neeraj Chopra had fulfilled his 'dream' of taking his parents on their first flight and had won everyone's heart, especially the middle-class people. Find out!

Famous javelin thrower, Neeraj Chopra was born on December 24, 1997, in the Khandra village, Panipat district, Haryana. The athlete is only the second individual gold medalist in the history of Indian sports. The athlete is second to iconic sports shooter, Abhinav Bindra, who had brought a gold medal for India at Beijing Olympics in 2008. The 24-year-old javelin thrower, Neeraj had finished the Tokyo Olympics 2021 with his best attempt of 87.58m, ahead of Czech Republic's talented duo, Jakub Vadlejch and Vitezslav Vesely. Neeraj's performance in the tournament had brought India a gold medal and immense respect and recognition on the international stage in athletics.

For the unversed, on June 30, 2022, Neeraj Chopra was all over the headlines after he had broken the national record of 89.30 m, set up by himself during the Paavo Nurmi Games in Finland. The javelin thrower had returned to the famous Stockholm Diamond League Action after four long years, and he had indeed marked his return in style. The athlete had made a new national record of 89.94 m and had also finished 2nd in one of the toughest competitions in the world. It was indeed a proud moment for the entire nation.

Dance+ 6: Olympic Gold Medalist, Neeraj Chopra Reveals The Kind Of Girl He Would Love To Marry While on the professional front, Neeraj Chopra continues to break international records, inspiring the future javelin throwers across the country and making his country proud. The athlete prefers to keep his personal life private. However, there's one incident from his personal life that he had shared on social media, and it brought him immense love and respect from people across the country. It was on September 11, 2021, when Neeraj took to his Twitter handle and had dropped a series of pictures with his parents, Saroj Devi and Satish Kumar. In the photos, Neeraj could be seen posing with his parents in a plane, as the doting son had taken his mom and dad on their first flight. The respective smiles on Saroj and Satish's faces proved how proud they were of their son. Check it out! 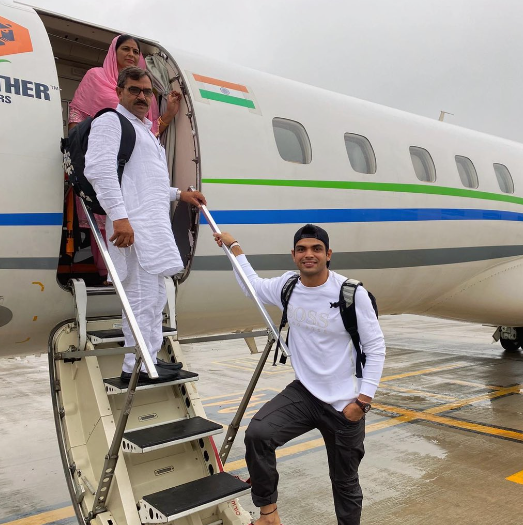 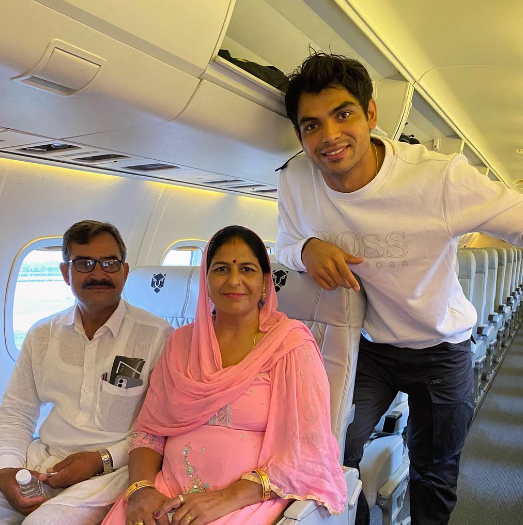 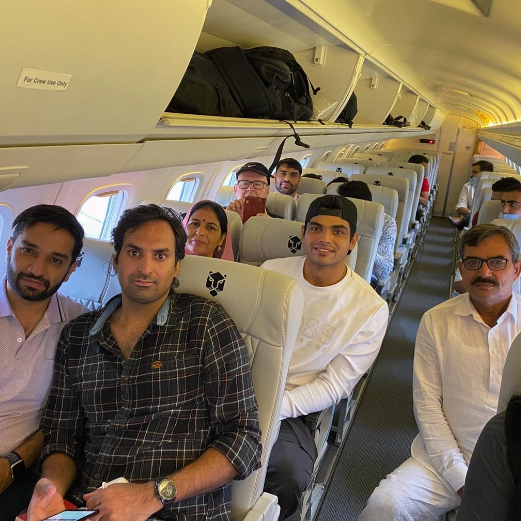 Neeraj Chopra had also penned an emotional note in his tweet along with these heart-melting pictures. In his note, Neeraj had admitted that it was his childhood dream to take his parents on a flight. The gold medalist had also thanked everyone for their wishes and support with which he was able to achieve what he had achieved so far in his career. As soon as his tweet had gone live, netizens, politicians and celebrities had poured congratulatory messages his way. Although everyone found it unmissable, but Neeraj's dream to take his parents on a flight was quite relatable to the middle-class people, who also share the same dream. Here's how everyone had reacted to Neeraj's dream fulfilment!

After winning the gold medal in the Tokyo Olympics 2021, in an interview with legendary Indian cricketer, Kapil Dev on ABP News, Neeraj Chopra had talked about his marriage. When the former captain of the Indian cricket team had asked Neeraj about his relationship status and the female attention he was receiving after winning the gold medal, the athlete had given an inspiring answer. To Kapil Dev's question, Neeraj had stated that he wasn't thinking about marriage and that he was solely focused on his sports career. He had said:

"No, I am focusing completely on sports. Rest all the things will go on, but I would want to keep my entire focus on sports right now."

For the unversed, in 2016, Neeraj Chopra was also appointed to the position of Junior Commissioned Officer in the Indian Army with the rank of 'Naib Subedar'.

Dance+ 6: Olympic Gold Medalist, Neeraj Chopra Reveals The Kind Of Girl He Would Love To Marry