Nawazuddin Siddiqui's wife, Anjana made some serious allegations on the actor, and his brother came forward to respond to them. Scroll down to know what he has to say! 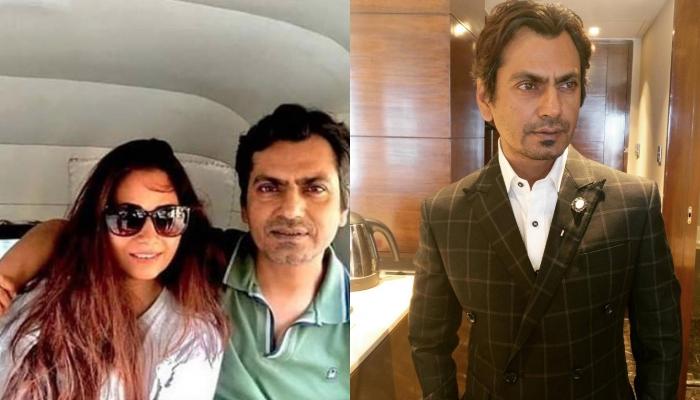 One of the finest actors Bollywood has ever seen, extremely popular actor, Nawazuddin Siddiqui's personal life had been in the news ever since his estranged wife had accused his family of domestic violence. There has been lot of legal steps, notices and complaints from both sides, but to no avail. While Nawazuddin's wife, Aaliya has been quite vocal about the whole matter, Nawazuddin has not released any statements in his defense so far. (Recommended Read: Shweta Tiwari Tests Positive For COVID-19, Reveals She Has Sent Her Son, Reyansh To Abhinav Kohli)

For the unversed, Nawazuddin Siddiqui's estranged wife, Aaliya Siddiqui now goes by her maiden name, Anjana Anand Kishore Pandey after the rift in their marriage. In the new development, Anjana has now made some serious allegations on the actor, and his brother has come forward to respond to them. However, Nawazuddin Siddiqui is yet to comment on the matter. Scroll down to know what his brother has to say! 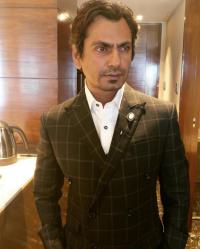 According to a report by Zoom, yesterday, on September 23, 2020, Nawazuddin's estranged wife, Anjana had filed a written complaint against him at the Versova police station and had accused the actor of rape and cheating. The Police had acknowledged the complaint, and an F.I.R. was underway. On the other hand, Nawazuddin Siddiqui' brother, Shamas Siddiqui claimed that the charges are false and that he would approach Bombay High Court over the matter, citing defamation.

Anjana's lawyer had issued an official statement over the matter and had said, "My client had submitted a detailed written complaint to Versova Police Station for Rape, Cheating and Deceitfully causing cohabitation by inducing her a belief of lawful marriage, under sections 375, 376 (k), 376 (n), 420 and 493 of the Indian Penal Code against Mr Nawazuddin Siddiqui. Hopefully, the F.I.R. will be registered soon." 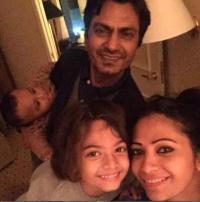 Not only this, but Anjana had earlier registered an F.I.R. against Nawazudin's brother, Shamas also, reportedly accusing him of molestation. A Mumbai court had rejected his anticipatory bail plea on September 14, 2020. On September 21, 2020,  Anjana had claimed in her Tweet that Shamas has been absconding for almost a week and that the Police wants him for serious crimes. Her tweet could be read as "@ShamasSiddiqui is absconding since almost a week & Police are on the look-out for him. He is wanted for serious crimes. Anyone having any information of him, please share so that he can be duly arrested for custodial interrogation as per Court Order. Please help." (Also Read: Sanjay Dutt's Kids, Shahraan And Iqra Enjoy Some Family Time, Before Actor's Chemotherapy Session)

Shamas Siddiqui reacted to Anjana's tweet yesterday, on Sepetember 23, 2020 and said, "I was never on the run, I was out for my next film's recce & in regard to the false complaint against me, it has been stayed by the Hon'ble Bombay High Court. The complaint against Mr. Nawazuddin Siddiqui is also false & will be heading to Hon'ble BHC for this too." He further added, "Chahe to 10-12 Jhoote cases kar do but Mai apna 2.16 Cr tumse court mein le kar hi rahunga... Parivaar ko bhi jhoote cases mein phasaya ja raha hai aur ye saza mil rahi hai 30 crore ki demand puri na karne ki..." 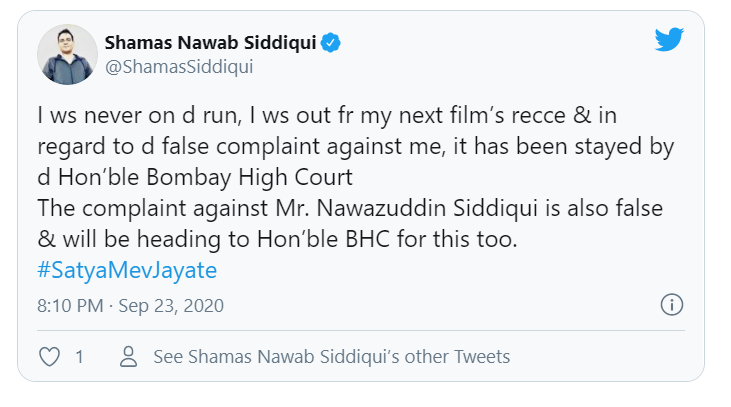 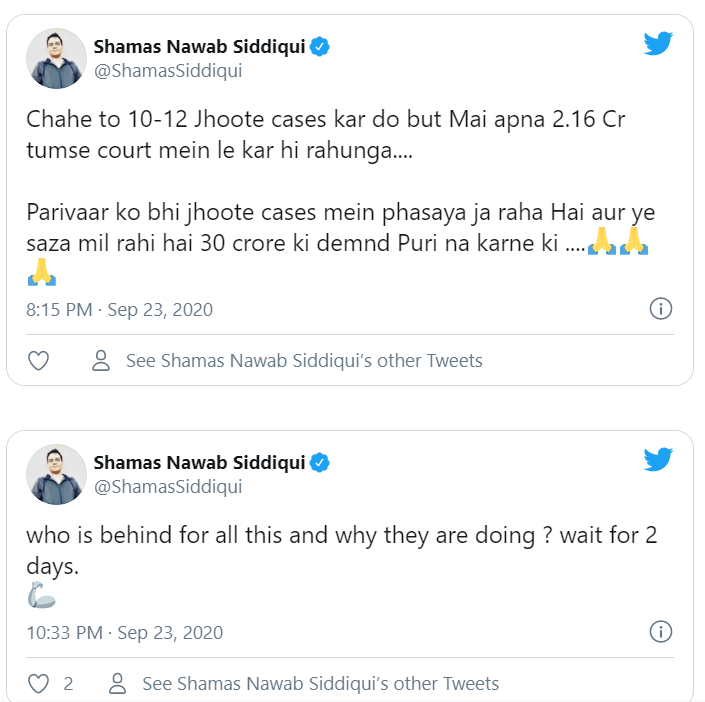 For those who don't know, Nawauddin Siddiqui's brother, Shamas Siddiqui is all set to make his directorial debut in Bollywood with the film Bole Chudiyan, which stars his brother, Nawazuddin Siddiqui and actress, Tamannaah Bhatia. (Don't Miss: Ankita Bhargava Shares A Funny Throwback Picture With Hubby, Karan Patel Lifting Her In A Pool)

What are your thoughts on Anjana's allegations on Nawazuddin? Share with us!