Nawazuddin Siddiqui's estranged wife, Aaliya Siddiqui writes an open letter to him promising she would not back down from this fight for the sake of herself and her kids. Read her letter inside! 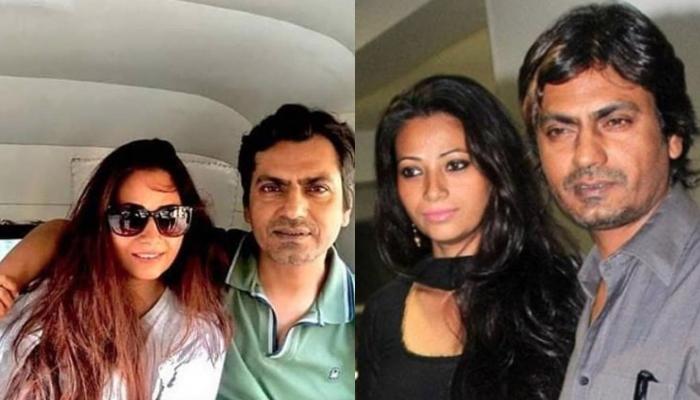 Ever since the news of Nawazuddin Siddiqui's separation from his wife has come out, his marriage has become a ruckus owing to all the blame games as his estranged wife, Aaliya Siddiqui is not skipping any chance to throw dirt on his name by making new allegations and revelations almost every day. Scroll down to read an open letter that Aalia has written to Nawaz amongst this facade! (Recommended Read: Aparshakti Khurana Dances On An 80s Pop Song With His Dad, Recreating The Magic Of 'Disco Dancer')

Earlier, in a conversation with Pinkvilla, Aaliya Siddiqui had made some serious allegations on the actor. Aaliya had alleged that she used to go for regular check-ups all by herself during her pregnancy days. She had said, "When I was pregnant, I had to drive all by myself for check-ups. My doctor used to tell me that I'm mad and I'm the first lady who has come alone for delivery. My labour pain started, and Nawaz and his parents were there." She had also added that her husband, Nawazuddin was busy talking with other girls. In her words, "But when I was in pain, my husband is not with me. He was talking to his girlfriend on calls. I knew everything because there used to be an itemised statement of phone bills."

Nawazuddin Siddiqui's estranged wife, Aaliya Siddiqui took to her Twitter handle to post an open letter she has written firmly putting forward her stand on the kerfuffle that her marriage with Bollywood star, Nawazuddin Siddiqui has become. She captioned her letter as "To A STAR who boastingly thinks he is INVINCIBLE under his own created enigma of stardom but failed miserably as a human being. ( let alone being a husband or a dotting father.)" Excerpts of Aaliya's letter can be read as "Every single thing or right I have sought in the family towards my own life's existence and self respect…. & I have only "Well planted" mouthpieces having replied to me. Every time for the longest of my 10 years of my married life. You brother in particular or then other brothers… only faces changed. Your manager? Your hired PR machinery led fake news doing my character assassination – time n again? Or your hired legal councillors or wives of those very brothers and their notice." 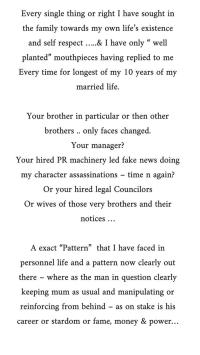 Aaliya further wrote how this time she is determined not to back off and fight for the right. She also alleged him of her character assassination and threatening her. Her letter can be further read as "But this time I am more firm, more adamant and refuse to bow down. You assassinate my character, try & threaten me with your distractions & you only have more firmer me against you and your malicious ways and traits. While you believe in quantity in the number of ill-directed notices riding on misplaced sensibilities under the realm of your stardom, I will only serve you with more quality and evidences in this fight." (Also Read: Neha Dhupia Bedi Shares Adorable Video Of Daughter, Mehr Walking In Rain As She Turns 20-Months-Old) 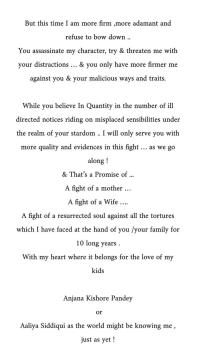 Aaliya's letter ended on the note of how her fight is against all the tortures she had faced over the years and that she promises to fight with all her will till the end. It can be read as "That's a promise of a fight of a mother, a fight of a wife, a fight of a resurrected soul against all the tortures which I have faced at the hand of you/your family for ten long years. With my heart where it belongs for the love of my kids. Anjana Kishore Pandey or Aaliya Siddiqui as the world might be knowing me, just as yet!" (Also Read: Sonam Kapoor And Anand Ahuja's 'Then' And 'Now' Pictures Give A Glimpse Of Their 'Phenomenal' Love)

What do you think about Nawazuddin Siddiqui's troubled marriage?