Nargis Fakhri is dating a New York-based chef, Justin Santos. Recently, Justin shared stunning pictures with his ladylove, Nargis and his caption made our heart flutter.

Heartbreaks are really bad, but picking up the broken pieces and beginning the journey of life all over again need a lot of courage. Actress, Nargis Fakhri had gone through a similar phase in her life when she had broken up with filmmaker, Matt Alonzo. The two had begun dating in 2017 and were living together in Los Angeles. But in 2019, the duo had broken up and to get over her breakup phase, the actress had found solace in yoga and spirituality. (Also Read: Shahid Kapoor And Ishaan Khatter's Hilarious Instagram Banter Over Former's Monochrome Mirror Selfie)

Nargis Fakhri is known for her role in Ranbir Kapoor starrer romantic drama, Rockstar, for which she was nominated with the Filmfare Award for Best Female Debut. She later played a war correspondent in Madras Cafe followed by blockbuster comedies, Main Tera Hero and Housefull 3. Nargis had dated actor, Uday Chopra in 2014 and the couple was speculated to get married soon. But in 2017, the couple had broken up and in May 2018, Nargis had confirmed her relationship with the filmmaker, Matt Alonzo. Recently, Nargis had made her relationship official with American chef, Justin Santos by sharing some mushy pictures. Now, Justin took to his IG handle and shared love-filled pictures with his ladylove, Nargis. In the pictures, Justin donned printed shorts with a brown hoodie, whereas, Nargis looked stunning in a white jumpsuit. Along with the pictures, Justin penned a romantic note for his ‘perfect woman’ and expressed how lucky he is to have her. His note can be read as “Look at this perfect woman right here. How did I get so lucky? On top of her being drop dead gorgeous would you believe me if I told you her jokes were hilarious too? #Unicorn #BlueSteel.” 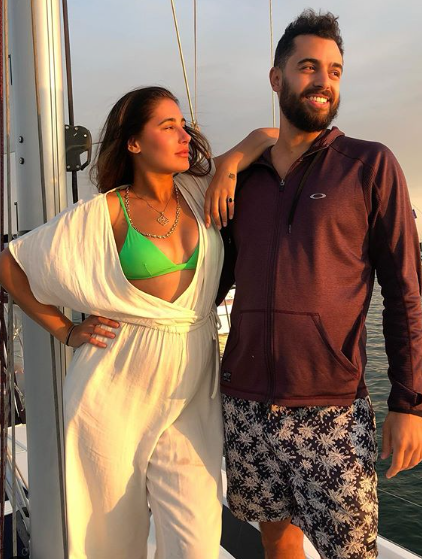 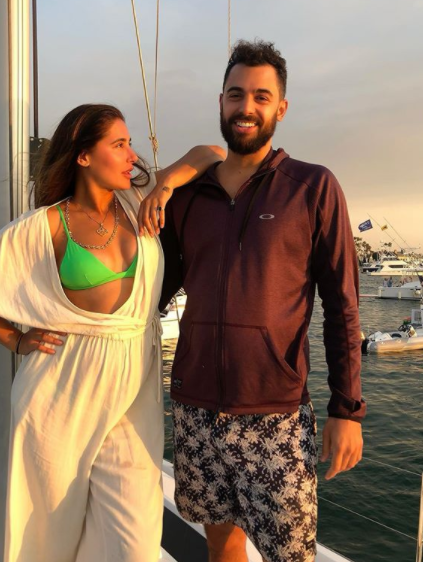 While Justin is based in New York, Nargis is in California. The couple take out time to be with each other. On September 1, 2020, Nargis had posted a series of pictures and videos with her beau, Justin from their shooting session and had written in the caption, "When he takes you shooting. Learning to shoot a shoshotgunth @jsantos1923. That gun was kinda heavy." (Also Read: Angad Bedi Shares His Baby, Mehr's Cycling Video By The Seashore, Her Mickey Hairstyle Is The Cutest) On June 1, 2020, Justin Santos had shared an array of pictures and videos when he had visited his girlfriend, Nargis in California. His caption could be read as "What a phenomenal weekend with some incredible people. As many times as I've been to California I've barely had a chance to explore it until this past MDW us. Thanks for having me@nargisfakhri and thanks for being such gracious hosts @rebeccasuhrawardi @shane.cw had a blast, until next time #SanClemente #California #MDW #BeachDaze #sunshinecoasthinterlan."

After her breakup with Matt Alonzo, Nargis had gone through a really difficult phase and had put on some extra kilos. The actress had taken to yoga and spirituality to come back to her fit self, encouraging millions with her fitness journey. On March 31, 2019, after her alleged breakup with the filmmaker, Matt Alonzo, Nargis had shared a 'before and after' picture of herself on her IG handle. She had revealed about her incredible weight loss journey and had written, "Living life in the public eye can be very difficult sometimes. As much as it is a blessing, it also comes with its downside. Over the last 2 years, I've gained weight. On the left I weighed 178 lbs and on the right, I was 129. I have since lost 20 lbs through making lifestyle changes. If i can do it, so can you. Nurture your mind, body, and soul with positive thoughts and healthy choices. I'm going to bring you on this journey of becoming the best version of myself again, and i want you to join me on this journey too." (Also Read: Ankita Lokhande Shares Droolworthy Pictures Of Beau, Vicky Jain's Nephew And Niece, Abeer And Abeera) Well, we agree with Justin. Nargis is indeed a perfect woman. What do you think? Keep us posted. With the pandemic taking a toll on our mental health for the past year and a half and putting a halt to all our travel plans, we are eagerly waiting for the day when we will be able to embark onto a new trip very soon. However, as things are