Who says exes can’t be friends? We have a couple of examples from our Indian television and film industry where it is proved otherwise. And one amongst many ex-celeb couples is famous television stars Narayani Shastri and Gaurav Chopra. There was a time long back when these two were dating and they had a long relationship. But soon because of certain things that are best known to them, they parted ways. (Check Our: Kamya Punjabi Reveals Her Wedding Gift For Rubina Dilaik And Abhinav Shukla)

Nonetheless, ever since they broke up, Narayani and Gaurav have been good friends. They separated but on an amicable note. Afterwards, Narayani went on to marry Steven Graver a.k.a Tony and Gaurav recently tied the knot with a non-industry girl named, Hitisha Cheranda. Recently, the ex-couple, Narayani Shastri and Gaurav Chopra appeared together on JuzzBaatt Sangeen Se Namkeen Tak hosted by Rajeev Khandelwal. (You May Also Like: Neil Nitin Mukesh's Dear Wifey Rukmini Sahay's First Look From Her Grand Baby Shower) 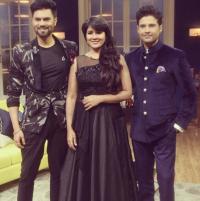 On the show, apart from discussing about their lives and the times when they were together, both of them shook legs on a romantic song. And guys, the video has gone viral with the hashtag #DancingWithEx”. Both Narayani and Gaurav danced on the title track of Hum Tum. Here’s the video, check it out:

Initially, the two of them were invited along with their respective spouses. But both Hitisha and Tony are camera shy. Talking about it, a source stated to DNA, "Initially, both were approached separately and were invited on the sets along with their spouses. But they said that their partners are media shy. That’s when the makers asked Gaurav and Narayani if they will come together on the show and they immediately agreed. These exes are close friends today." (Must See: 'Luck' Fame Shruti Hassan And Beau Michael Corsale Get Clicked After A Romantic Lunch Date) 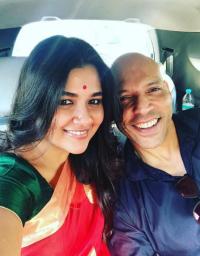 Also, on the show, when Narayani was asked about her equation with Gaurav, she said, "Gaurav and I had a very open relationship, which was out there. When you tend to be friends with your ex, it is awkward initially because you are moving from one phase to another, but then you get used to it." And she also talked about his wife Hitisha and retorted, "I have to be careful. I remember I have said a few things in front of Hitisha because I have known Gaurav for a longer time. But I am careful and do not overstep. Moreover, Hitisha is very warm and takes things very confidently." (Also Read: Rohit Purohit-Sheena Bajaj Break Up Again, Allegedly Sheena's Co-Actor Avinash Mishra Is The Reason) 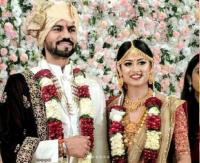 In an interview earlier when asked about the reason for missing her ex's marriage, she quoted, “Well, I was supposed to go to the wedding. But on Feb 18 when Gaurav got married, mere shoot ka last day tha. And, I couldn't go.” She even went on to talk about Gaurav and his wife Hitisha, “Gaurav and Hitisha, both, are amazing people. They are perfect for each other. Hopefully, they will always be happy.” Adding further she remarked, “Hitisha is a very smart, sensible and secure girl. Gaurav loves her a lot and she doesn't have to fear anything.”

This so good to see that Narayani Shastri and Gaurav Chopra are giving serious goals. Cheers to both of them!