Namrata Shirodkar shows off her husband, Mahesh Babu and kids' name tattoo on the popular demand of her Instagram fans. Check it out! 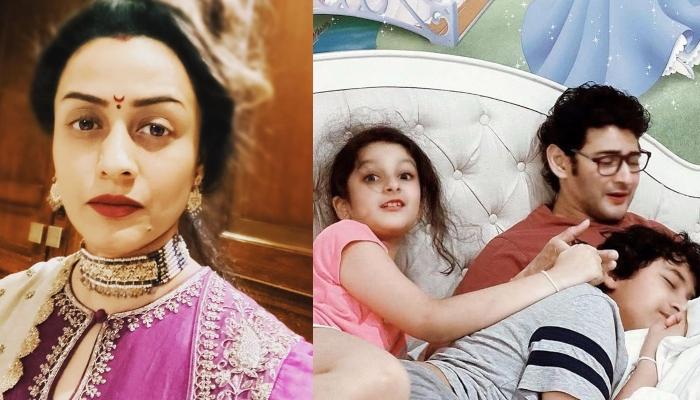 The first tattoo is always special as it brings along the magic of tomorrow and the past all wrapped in ink that you wish to get. It stays with you till the day you die and it goes into ashes with you. It is a way of self-expression that marks our soul forever. Some people get their names inked while others go for a trending tattoo, then there are the third ones, who get those people's name inked that are close to their heart. And Bollywood actress, Namrata Shirodkar is from the third category.  (Recommend Read: Ileana D'Cruz's Reply On A Fan's Question About Her Relationship Status Will Leave You In Splits)

Namrata Shirodkar is a brilliant actress and the proud wife of Telugu superstar, Mahesh Babu. It was in the year, 2000, when she had first met the love of her life on the sets of her first Telegu film, Vamsi. By the time, the shoot was wrapped up they had fallen for each other. In the year, 2005, the couple had tied the knot. Once in a media interaction, Mahesh had revealed the details of the wedding and had shared that he was shooting the whole night before for the film Athadu and had finished the shoot and had flown down to get married.

On June 30, 2020, Namrata hosted an 'Ask Me Anything' session on her Instagram handle, wherein she answered many questions of her fans. During her interaction, one of the fans asked her to show her forearm tattoo and the beautiful actress immediately clicked a picture of the same. In the picture, we can see her superstar husband's name on her forearm. We also spotted her kids, Sitara and Gautam's name written in Devnagri. Another fan questioned her about the moment when she had realised that she is in love with Mahesh Babu. To this, the actress replied, "It was the last day of 52-day long outdoor schedule in New Zealand. That's when it hit me."

Earlier, in an interview with the Deccan Chronicle, Namrata had revealed her views on being called the force behind Mahesh's career. She had said, “You know, people believe Mahesh does what I ask him to. That’s not true. He may look shy and gentle, but, he knows his mind. All his career decisions are taken by him, although he does share the plot and script idea with me casually. Yes, if he dresses differently from the other actors in Andhra Pradesh, I could have influenced his sartorial choices.”  (Also Read: Arjun Rampal Dazzles On The Cover Of GQ With His Daughters, Mahikaa, Myra And His Son, Arik)

For those who don't know, Namrata Shirodkar is the granddaughter of veteran actress, Meenakshi Shirodkar. Namrata, who is quite active on social media had once shared a throwback picture of her family and had captioned it as, “My roots, my reality, my people. The real reason for who I am today. Feeling the love, gratitude. Blessed by my makers.” (Don't Miss: At Rangoli Chandel's Housewarming Party, Sister, Kangana Ranaut Showers Love On Her Nephew, Prithvi)

Well, we love Namarata's name tattoo! What about you?