The pre-wedding festivities of the bride-to-be, Isha Ambani and hubby-to-be, Anand Piramal have begun in full swing in Udaipur, Rajasthan with Anna Seva ceremony wherein the Ambanis are going to serve food to 5100 people 3 times a day from December 7-10, 2018. Last night a rocking sangeet ceremony was organised and it was a sight to behold! Pictures and videos from last night have been going viral on social media. (Suggested Read: Isha Ambani And Anand Piramal Dance Together On 'Mitwa' On Their Sangeet, Video Inside)

Bollywood celebrities like Salman Khan, Katrina Kaif, John Abraham, Parineeti Chopra, and many others attended the pre-wedding functions of Isha and Anand. In fact, the former first lady of the United States of America, Hillary Clinton also joined the Ambanis and Piramals last night. Among the videos from the sangeet ceremony, the one which will win your heart is where Isha's parents, Nita Ambani and Mukesh Ambani were seen dancing together, and the two looked like every happy parent on their daughter's wedding. And guess what? In the same video, you can see Anant Ambani dancing with his fiance, Shloka Mehta. Take a look:

Earlier, we brought to you the dance video of Isha and Anand themselves. They danced on Kabhi Alvida Naa Kehna's song Mitwa and looked like one elated and excited couple on their wedding. Here's their video:

Before the sangeet, the night witnessed the Sandhya Maha Aarti for which, a 35 feet statue of Srinathji has been set up at Udaivilas hotel. A source had earlier shared, “The family has requested a floral set up on the vessel holding the idol of Shrinathji. Dancers will perform on the floating stage, in keeping with Indian customs and traditions. The hosts also plan to conduct a maha aarti to seek blessings of their lord.” Take a look:

On December 7, 2018, Ambanis and Piramals released a joint statement detailing out about the Anna Seva ceremony which could be read as, “As a mark of respect and gratitude to the city of Udaipur, and to seek their blessings for the upcoming wedding of their daughter, the family has commenced a special “Anna Seva” - taking up the auspicious task of feeding 5100 people (majority of them with special abilities) three times everyday from 7th to 10th December, to coincide with the pre-wedding functions of Isha Ambani and Anand Piramal on 8th & 9th December. Family members, including Mukesh and Nita Ambani, Ajay and Swati Piramal, Isha and Anand were present at this Anna Seva function, serving people and interacting with them. The Anna Seva functions will continue for four days, from 7th to 10th December and will be performed three times a day at the Narayan Seva Sansthan, Udaipur." (You May Like: Shahid Kapoor's Family Members Slam The Rumours Of The Star Being Diagnosed With Stomach Cancer) 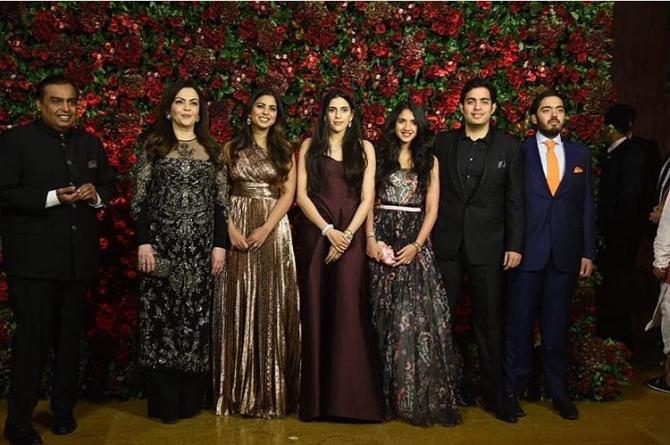 And it lastly states, “From the rich Kanjeevaram, exclusive Patola, intricate Chikankari to fine Bandhani, exhibits cover over 30 types of textiles and weaves. Depicting folktales and local legends, artists will showcase ancient painting forms like Gond, Madhubani, Phad, Warli and Thangka. Weavers, potters and sculptures from all around the country will make this a mega-celebration of art and culture. This unique exhibit has not just provided livelihoods to thousands of such artisans, but also giving an opportunity to showcase their rare works from every nook and corner of India, for people’s interest, appreciation and support.” (Don't Miss: Taimur Ali Khan And Kareena Kapoor Khan Enjoy Mother-Son Day Out On Sports Day, Videos Inside)

Stay tuned in here for more updates on Isha and Anand's wedding functions. December 12, 2018, saw one of the most happening and big fat Indian wedding of the daughter of Asia’s richest man, Mukesh Ambani and his wife Nita Ambani’s darling daughter, Isha Ambani. The Ambani beti walked down the aisle with the business tycoon, Anand Piramal in the presence of their