Antilia was all decked-up yesterday for Mukesh Ambani and Anil Ambani's sister, Nina Kothari's son, Arjun Kothari's pre-wedding bash and so were Isha, Shloka and Radhika.

Whenever we hear the terms Ambani and wedding together, all that we can decode in our mind is extravaganza, iconic destinations, a well-lit Antilia and an array of stars! Two almost back-to-back weddings at Antilia have made us all realise that none can do weddings better than the Ambanis. The ones to celebrate the occasion like a festival, the Ambani household was all lit-up yet again yesterday (November 10, 2019) for a pre-wedding bash and no, it is not about sabse chote Ambani, Anant! (Do Read: Mohena Kumari Singh's Royal Vidaai, She Bids Goodbye To Her Home In Rewa, All Emotional)

Before curiosity kills you further, here’s divulging out the truth! Antilia was all decked-up yesterday for it was Mukesh Ambani and Anil Ambani’s sister, Nina Kothari’s son, Arjun Kothari’s pre-wedding bash. The billionaire heir is all set to get married and for the same, Nayantara’s mother, Nina had thrown a lavish bash for the soon-to-be-wed. Just for your information, quite like her tycoon brothers, Nina became the Chairperson of Kothari Sugars and Chemicals Limited post her hubby, B H Kothari’s demise and is noted as one of the power women of this country. About Mukesh Ambani’s nephew, Arjun Kothari’s pre-wedding party, the same took place at the Ambani household, Antilia and was a host to an array of B-town celebs. While we will share the same in the later paragraphs to come, please do note the show-stealers of Arjun Kothari's pre-wedding party! Any guesses as to who were they? They were the three ladies of the Ambani household! While Isha Ambani Piramal looked gorgeous in a jumpsuit with dupatta tied to her waist, Shloka looked every bit of stunning in a crop top, long skirt and a full-length mauve floral shrug. Radhika looked like an angel straight from heaven in a red Anamika Khanna ensemble. Here are the pictures: 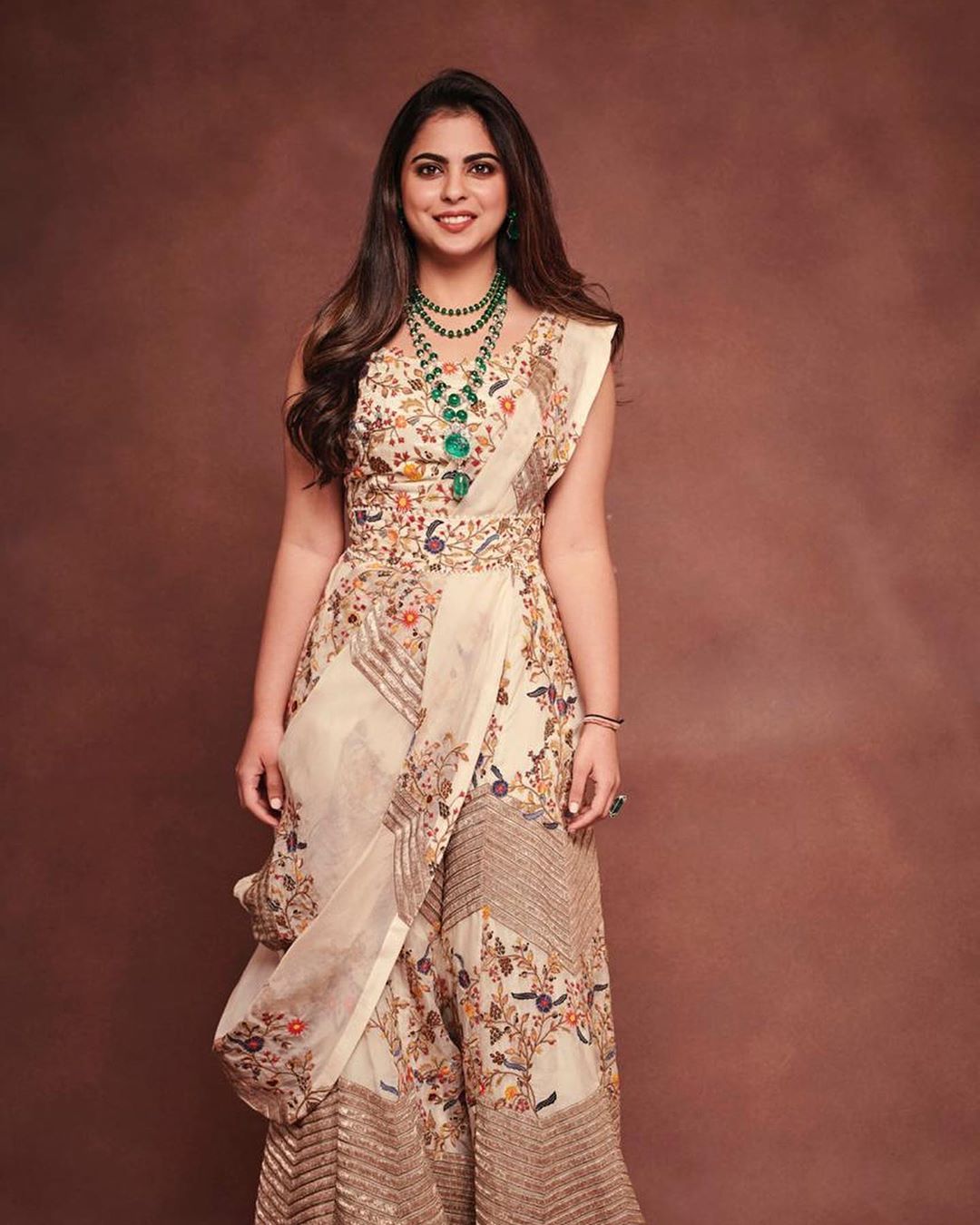 Mohanlal's Wife, Suchitra Hated The 'Lucifer' Actor Initially, Here's How She Fell In Love With Him

Talking about Arjun Kothari's sister, Nayantara Kothari's pre-wedding and wedding in here, it must be noted here that in 2013, news all over had it that the year will begin for the Ambani and Kothari families with the wedding of Nayantara. For Nayantara and her hubby, Shamit’s engagement, Mukesh had also hosted a star-studded party at Antilia on January 05, 2013, wherein a wide array of stars such as Anil Kapoor, Boney Kapoor and the late, Sridevi Kapoor, Abhishek Bachchan, Karan Johar had attended the same. Meanwhile, checkout a picture of Nayantara bonding with her cousins, Isha Ambani Piramal and Isheta Salgaoncar Modi in 2017 at the latter's wedding. (Also Read: Deepika Padukone Dances With Husband, Ranveer Singh At Her Friend's Pre-Wedding Bash) We have often seen how high-profile business families marry within the same community. Talking specifically about the Ambanis’ in here, while Isha Ambani got married to the Executive Director of the Piramal Group, Anand Piramal, Akash Ambani married the daughter of diamond magnate, Russell Arunbhai Mehta. A high-profile CEO had once shared with The Economic Times about the amalgamation of business families through weddings, “The business community is also a very large and strong community, similar to the linguistic, caste and religious communities. And just as people feel comfortable in their respective communities, business communities, too, feel comfortable within their own circles. People know each other and also derive power out of each other.”

Coming back to the Ambani heirs and heiresses, Isha Ambani added a ‘Piramal’ to her surname on December 12, 2019, in Mumbai. She got married to business tycoon, Ajay and Swati Piramal’s son, Anand Piramal, from Piramal Group of Industries. Both families have known each other for over four decades. Anand-Isha had been good friends themselves before Anand proposed her for marriage. Anand, 33, had proposed to Isha, 26, in early May 2018, at Maharashtra's Mahabaleshwar temple and she had said a ‘yes’! 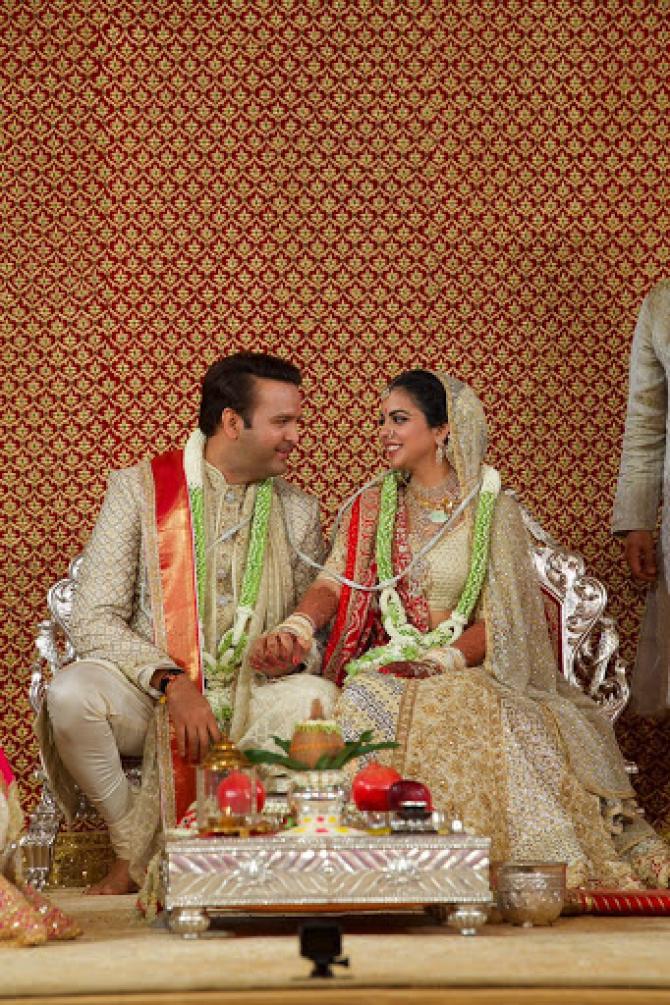 Shloka Mehta became an Ambani bahu on March 09, 2019, when she got married to her childhood sweetheart, Akash Ambani. Speaking about Akash in an interview back then, Shloka had shared with The Times of India, “Despite years and busy schedules, we have always found ways to stay connected. Akash is incredibly grounded and we share a bond based on meaning and memories. We don’t just get along – we also support each other’s hopes and aspirations and are determined to build a sense of purpose into our lives together. We are lucky to have a love that began from being best friends, and luckier still to have such supportive families.” (Must Read: First Look Of Mohena Kumari Singh From Her Lavish Reception, Suyesh Wore Colour-Coordinated 'Safa') 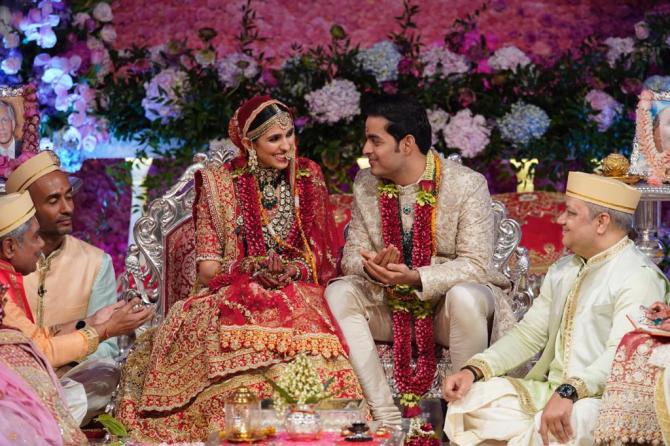 Junior-most Ambani, Anant is, in all probability seeing the daughter of the Vice-Chairman of Encore Healthcare Private Limited, Radhika Merchant. Not only is Radhika a favourite of the Ambanis, but Anant too is considered a vital part of the Merchant family (already!). A picture posted by one of Radhika’s fan pages had the beauty pose with her family, comprising of her younger sister, Anjali Merchant, boyfriend, Anant. Radhika, as usual, had looked pretty in an orange lehenga and the picture had spoken volumes of family love. 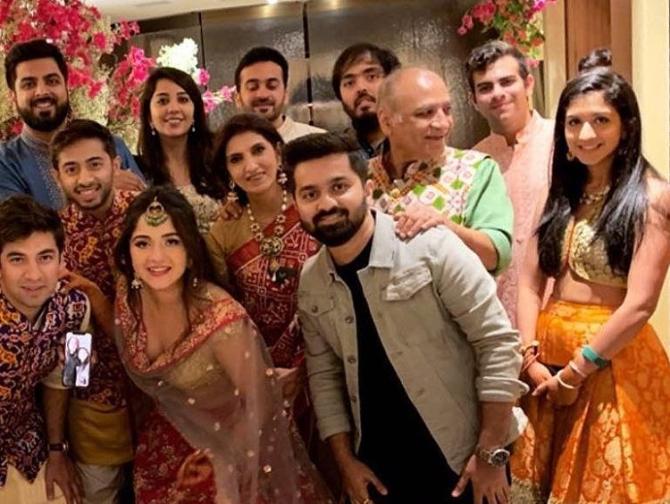 Guys, how did you like the pictures from Mukesh Ambani’s nephew, Arjun Kothari’s pre-wedding bash? Keep us posted!