With the wholesome family entertainers like Hum Aapke Hain Koun..!, Hum Saath - Saath Hain and Vivah, Sooraj Barjatya and Rajshri movies know the fam-jam and samdhi bonding-game quite well. Right from, Waah Waah Ramji, Samdhi Samdhan to Joote De Do Paise Le Lo and finally, Babul, the 1994 film, Hum Aapke Hain Koun..! influenced wedding functions in our generation so much that there isn't a wedding without these songs! Talking about samdhi-samdhan, right now we can only think of the Ambanis and the Mehtas, who will soon turn their dosti into rishtedaari with the union of their children, Akash Ambani and Shloka Mehta. (Also Read: Alia Bhatt And Ranbir Kapoor Enjoy Chainsmokers' Performance At Akash Ambani-Shloka Mehta's Sangeet)

The Ambani-Mehta families along with their close friends and relatives have flown off to St Moritz, Switzerland, to celebrate the pre-wedding functions of Akash Ambani and Shloka Mehta. In one of the pre-wedding celebrations, the families decided to play Antakshari wherein the Ambanis and Mehtas competed with each other, and the game was hosted by the alleged soon-to-be choti Ambani bahu, Radhika Merchant.

Akash Ambani Seeks Blessings Of Grandfather, Dhirubhai Ambani Before He Leaves For His Baraat 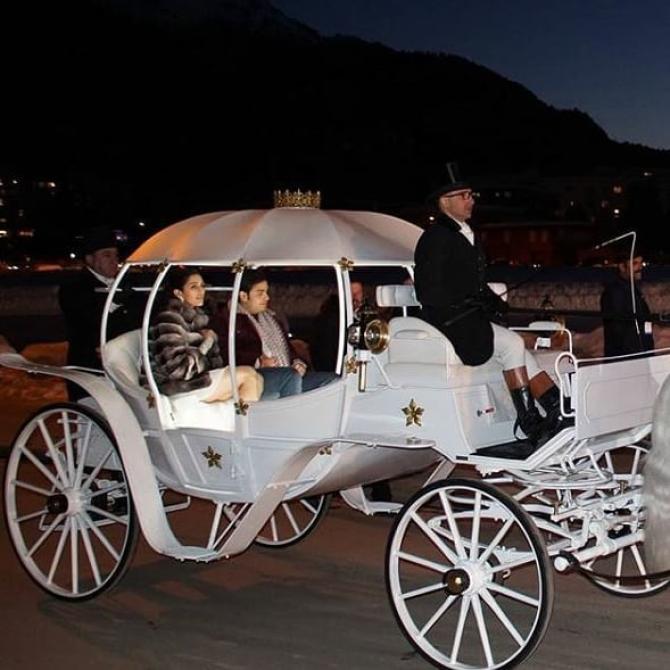 Amongst the videos that went viral from the Antakshari round, a video of Mukesh Ambani and Mona Mehta grooving to the Samdhi Samdhan song from the film, Hum Aapke Hain Koun..! has made us super nostalgic. While samdhan, Mona Mehta sings, “Hum Ko Jo Hai Nibhana Vo Naazuk Bandhan Hai, Samne Samdhi Ji Gaa Rahi Samdhan Hai…” post which, they greet each other by joining hands. And in the next turn, Mukesh sings Aye Meri Zohra Jabeen from the film, Waqt for his wife, Nita Ambani. Here’s the video:

In another video that is going viral from one of the pre-wedding functions of Akash Ambani and Shloka Mehta, Aamir Khan gives a speech and reveals that he is on #TeamLadkiwala. Sharing how he has seen bride-to-be Shloka Mehta growing up and revealing for how long he has known her father, diamond magnate, Russell Mehta and her mother, Mona Mehta, this is a video that you just can’t miss. Take a look:

Do you remember sometime back, Madhuri Dixit-Nene and Renuka Shahane shared a moment dancing together to Lo Chali Main and treated us with a 90s moment we could've never imagined to be possible? Posted on Renuka's Instagram page (as well as Madhuri's and producer, Karan Johar's), the video has reel-life sisters and real-life friends, Madhuri and Renuka recreating the steps of Lo Chali Main. (Also Read: Unseen Picture Of Isha Ambani Piramal Dancing While Hubby Anand Piramal Can't Take His Eyes Off Her)

Speaking about the remake of Hum Aapke Hain Koun..!, Renuka had shared with a leading daily, “Revisiting Hum Aapke Hain Koun would surely bring something different this time around. If it’s remade for the younger generation, I think they’d like to see the characters in a modern sort of way. Hum Aapke Hain Koun is a very family-oriented film, where everyone loves each other. It started this whole plethora of sangeet, mehendi functions at all family weddings. And that has not gone out of fashion yet, so, definitely, a Hum Aapke Hain Koun remake would still work. And I’d love to see Alia Bhatt and Varun Dhawan play the new-age Nisha and Prem.” Coming back to Akash Ambani and Shloka Mehta’s March do, here are all the details about their wedding functions. An India Today report contained details, which could be read as, “The Mangal Baaraat will assemble at the Trident in Mumbai at 3.30pm on Saturday. From the Trident, the baaraatis are to leave for the Jio World Centre in Bandra Kurla Complex. A high tea will be hosted for the guests at Jio World Centre at 6.30pm on March 9. Akash and Shloka's wedding ceremony will take place at 7.30pm.” Apart from this, a post-wedding celebration will be held on March 10, 2019, and a reception will be hosted on March 11, 2019, for people belonging to the world of business, Bollywood, politics and cricket. (Also Read: Vijayeta Basu Wears Sis, Bipasha Basu's Bridal Dupatta At Her Wedding, Looks Lovely As Bengali Bride)