Mouni Roy was initially in UAE during the lockdown and then moved to London for professional commitments. In an IG story, Mouni flaunted a huge diamond on her ring finger which has our attention.

Hailing from Cooch Behar, West Bengal, Mouni Roy is the granddaughter of the famous Jatra theatre artist, Shekhar Chandra Roy and daughter of a theatre artist, Mukti Roy. After being a background dancer in the song, Nahi Hona from the film, Run (2004), Mouni had bagged the role of Krishna Tulsi in Ekta Kapoor's serial, Kyunki Saas Bhi Kabhi Bahu Thi, which had garnered her fame and love she had desired for. While it was just a beginning for Mouni, more than a decade later, she had made her debut in Bollywood with Akshay Kumar starrer Gold. Mouni became the true Bengali beauty of the Indian television, who is now spreading her charm in the Bollywood industry. (Also Read: Kamya Panjabi And Shalabh Dang's Adorable Notes On Their Six-Month Anniversary Is Pure Couple Goals)

While most celebrities prefer keeping their personal lives private, rumours mills don't stop churning speculations, especially regarding their love life. Mouni Roy was no different as since her journey had begun in the entertainment industry, she has been linked to various handsome hunks. From Devon Ke Dev...Mahadev co-star, Mohit Raina, Dubai-based banker, Suraj Nambiar, Gaurav Chopra to Brahmastra director, Ayan Mukerji, despite the linkups Mouni had kept her personal life under the wraps.

While Mouni Roy was initially in UAE during the lockdown, she had then moved to London for her professional commitments. Mouni has kept her fans hooked to her IG feed with her travel pictures and what she has been up to during the lockdown. But her IG story of trying out a filter by her friend, Roshni Chopra, caught her fans' attention. In the story, Mouni could be seen flaunting a huge diamond on her ring finger, which makes us wonder if she has secretly gotten engaged. On National Handloom Day, Mouni had posted a few pictures in a saree where we can spot the ring in her finger. Scrolling through Mouni's social media profile, we can spot the ring on her finger in several pictures.

In a 2019 interview with the Mumbai Mirror, Mouni Roy had answered the most asked question from her, i.e., about her relationship status. When Mouni was asked to reveal what her relationship status is, she had retorted, “People who matter know I’m single and it’s not about the shortage of time because you can compartmentalise your life. But I need to meet the right person, I can’t just pick someone and start dating. At the moment I’m grateful for this window (movies) that has opened in my life. I don’t think I should throw it away by not giving my 100 percent to it.” (Also Read: Disha Vakani To Dilip Joshi: Meet Real-Life Families Of The Cast Of 'Taarak Mehta Ka Ooltah Chashma')

In another interview in 2020, Mouni Roy had revealed to Pinkvilla that although she's still herself with everyone, there's been an evolution when it comes to how she is, when in love. Mouni had remarked, "I'm this way with everyone. What you see is what you get. I guess when I was younger, I was more over loving, wanting to over compensate in my . You shouldn't be like that. You should just be the person with your partner the way you are with yourself. To do anything without balance, too much of anything is not good."

When Mouni Roy was asked if she regrets loving someone, pat came her reply, "I don't regret anything. Because that eventually makes you the person you are. But could I have been better? Yes! Did I know any better at that point of time? No! I was just being the best I could be at that age or time." Revealing her wedding plans, Mouni had continued, "I absolutely don't have any plans of getting married right now. That would be one of the happiest days of my life. Once that is about to happen, everyone will know because I'm shouting from the rooftops." (Also Read: Sushant Singh Rajput Once Admitted Which Sister He's Closest To And What's His Most 'Pavitra Rishta')

We hope Mouni clarifies the truth behind the huge diamond ring and if she has gotten engaged, we would love to know who the lucky man is! 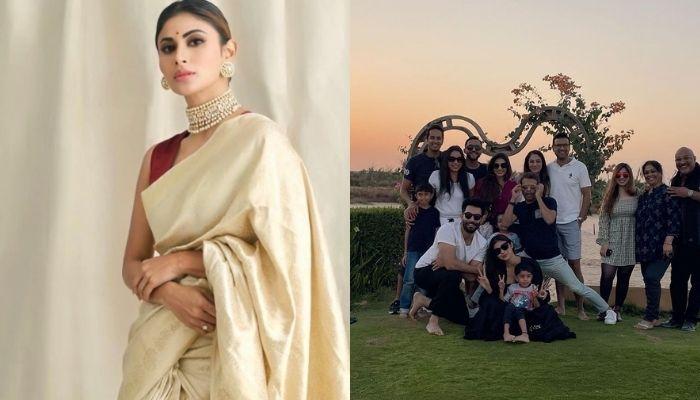 We have witnessed a lot of celebrity weddings in the year 2021. And it seems one more grand wedding is in attendance as we can hear faint wedding bells in popular actress, Mouni Roy's household. Mouni Roy's dating rumours with a Dubai-based banker named, Suraj Nambiar have constantly been making it