Like almost every year, 2015 too saw a lot of celebrity weddings that were full of glitz and glamour. The best part about the celebrity weddings of 2015 was, unlike most of the weddings where brides usually are the show-stealers, grooms too grabbed attention because of their stunning looks.

Yes, the celebrity grooms of 2015 were so stylish that even today, a lot of men can take inspiration from them to decide their wedding trousseau. So, let us explore their wedding style and inspire the to-be grooms. 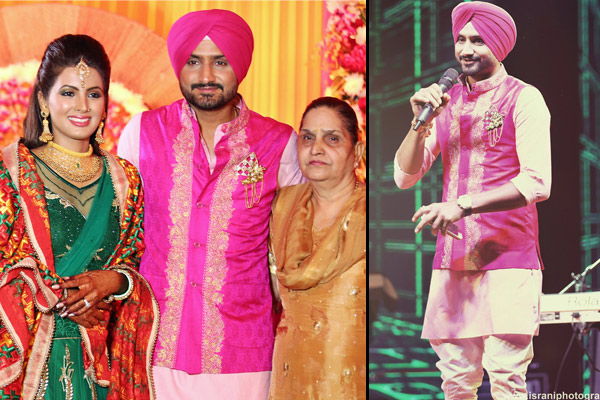 Harbhajan Singh and Geeta Basra's sangeet ceremony was one grand affair that will stay fresh in our memories for long. Well, Bhajji (as his fans fondly call him) ensured that his outfit for the evening matched up to the grandeur of the entire event. He wore a pink and golden jacket teamed up with a kurta and trousers in a lighter shade. The matching pink pagdiadded more elegance to his overall look. Not to miss, the golden brooch on his jacket! At his wedding, Harbhajan looked suave in an off-white and red sherwani teamed up with a red pagdiand stole. The intimate wedding of Soha Ali Khan and Kunal Kemmu took place at the Pataudi Palace, which was followed by a grand reception. While their wedding was a low-key affair, their outfits certainly were not the same. The couple looked absolutely royal in their classy avatars. Kunal's off-white kurta and white trousers teamed up with a peach pagdi exuded panache and showed the great taste that this man has! And, how can we miss the ornamental kalgi that had a feather adornment as well! 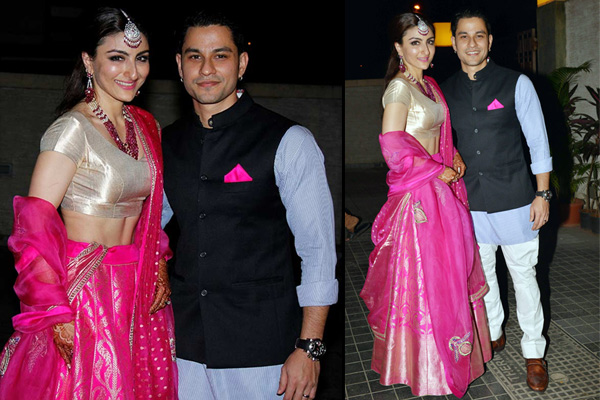 For the reception, Kunal opted for a light blue kurta teamed up with white trousers and a black sleeveless bandhgalajacket. And that's not all! He even had a pink pocket square so as to ensure that his outfit coordinated with Soha's, who wore the same colour. 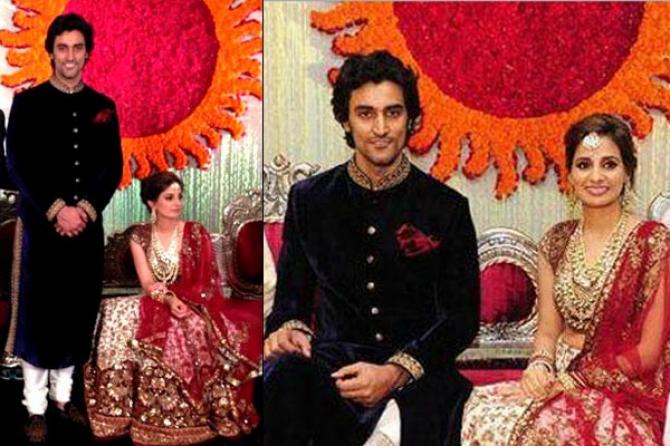 Kunal Kapoor and Naina Bachchan got married on February 9, 2015, in a quiet ceremony in Seychelles. They had a star-studded reception in Delhi at Amaanta Farms in Kapashera. While the pictures of their wedding never came out, we got a few glimpses of the couple from their reception party. Kunal Kapoor looked dapper in a royal blue bandhgala sherwani and white trousers. Just like Kunal Kemmu, he too had a red pocket square to match with his wife’s outfit. Quite a subtle way for men to colour-coordinate with their sweethearts, isn't it? 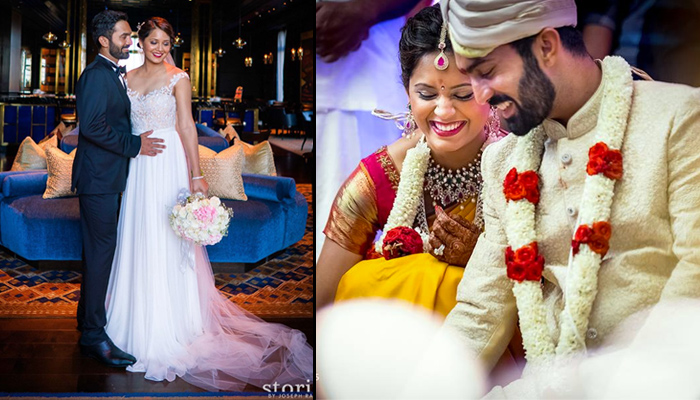 Indian cricketer Dinesh Karthik got married to squash player, Dipika Pallikal, who he first met in February 2013. They had two wedding ceremonies, a Church wedding and another one as per Hindu-Telugu rituals. Dinesh Karthik wore a tuxedo suit for his Christian wedding ceremony and for the Hindu wedding, he opted for an off-white jacket and dhoti.

Must Read: Sacred Rituals Of A Telugu Wedding This certainly was the biggest wedding of 2015, and also the wedding that broke a million hearts. Yes, Bollywood hottie Shahid Kapoor broke the dreams of all his fan girls, as he tied the knot with Delhi-based girl Mira Rajput in July 2015. It was Shahid's close friend and designer Kunal Rawal who designed his wedding trousseau. For the sangeet ceremony, Shahid was spotted wearing a red kurta-jacket that he paired with a dark pair of bottoms. At the wedding, he wore an off-white sherwani with a unique geometric pattern. 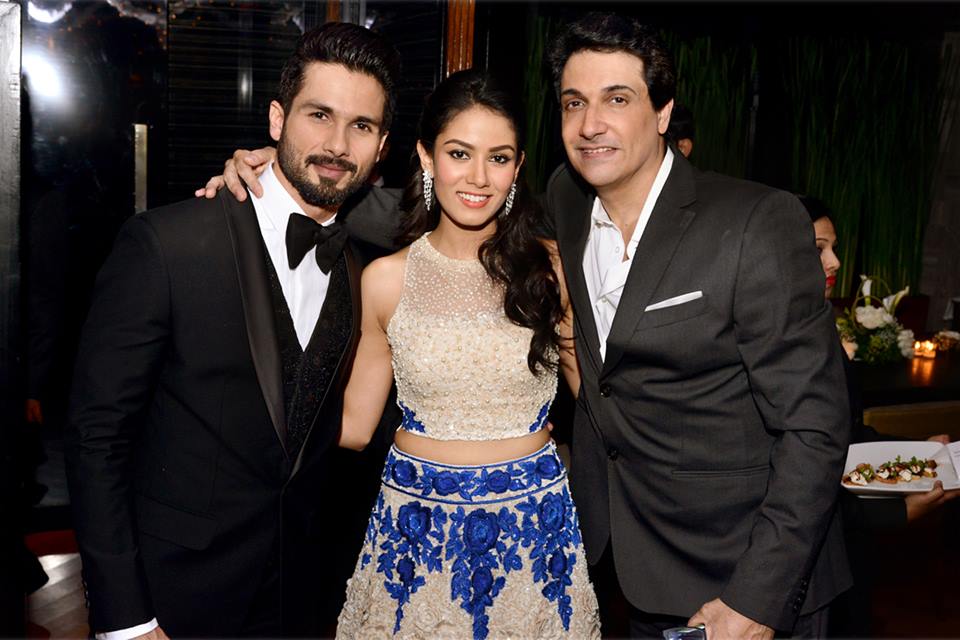 Lastly, he kept it crisp for the reception with a black tuxedo and a rather over-sized bow tie. 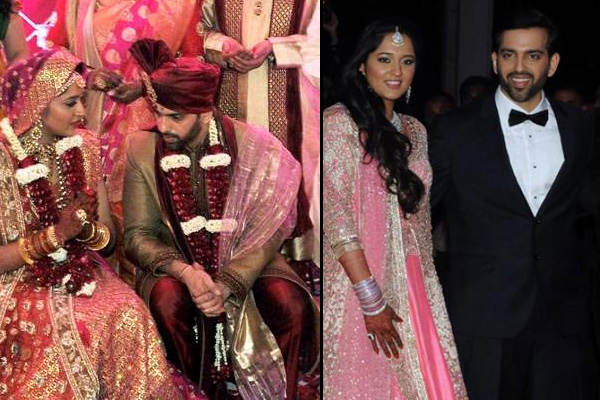 Sonakshi Sinha’s brother tied the knot with his long-time friend, Taruna Agarwal on January 18, 2015. The couple got married at the Taj Lands End hotel, in Mumbai, and the ceremony was attended by PM Narendra Modi, Amitabh Bachchan and many top industrialists. Kussh was seen wearing a very traditional sherwani in deep red and copper. For the reception, he looked dapper in a black tuxedo.

See what Sonakshi and other Celebs Wore To Their Sibling's Wedding 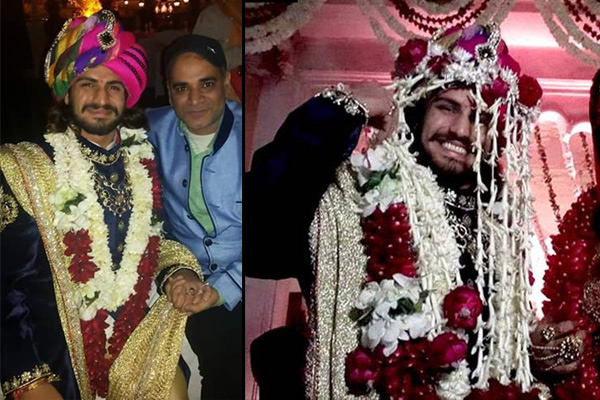 Rajat Tokas, the TV actor who played Akbar in Jodha Akbar, got married to his girlfriend, Shristi Nayyar at a lavish destination wedding in the Udaipur Palace. A royal location went perfectly with his on-reel royal persona. For the wedding, Rajat went all Akbar-style and skipped the ghodi for a royal elephant. 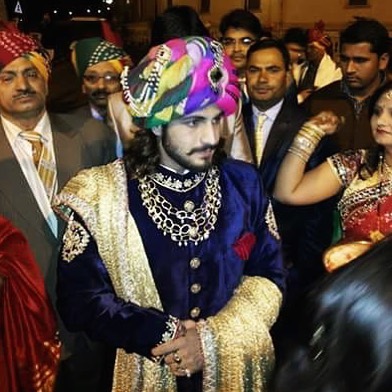 He made his entry in a truly royal fashion, wearing a deep blue and gold sherwani outfit with heavy embroidery. What stole the show was his very colourful pagdi with jewels!

2015 was a year of many star-studded celebrity weddings. We hope these stylish celebrity grooms inspired you as much as they did us.