To mark the beginning of the year 2020, Mohena Kumari Singh treated her fans with a frame-worthy photograph of her royal clan. Scroll to see why the picture didn't go well with her followers. The photo and video-sharing social networking, Instagram is famous for trolls and backlashes. While it bridges the gap between celebrities and fans, it also opens the door for the trollers to flood the stars with negative comments. Now most of the times, celebs choose not to pay heed to these trolls, there are times when they decide to give them a taste of their own medicine. Choreographer-cum-dancer-turned-actress, Mohena Kumari Singh proved to be from the latter category when she got trolled on her New Year post. (Also Read: Ajay Devgn And Kajol Open Up On Why They Have Said No To Many Films Together Before 'Tanhaji')

Hailing from a royal family of Rewa, Mohena Kumari Singh of Yeh Rishta Kya Kehlata Hai fame is a princess in real-life and she had tied the knot with her beau, Suyesh Rawat in a grand royal wedding in Haridwar on October 14, 2019. As a bride, Mohena had looked every bit of gorgeous in a traditional red Rajputana poshak with pallu drawn over her head, small bindi, matha patti and borla (maang teeka), traditional jadau nath and an all-red chooda. And Suyesh had complemented her well in a beige-hued embroidered sherwani and safa.

To mark the beginning of the year 2020, Mohena Kumari Singh treated her fans with a frame-worthy photograph of her royal clan from her wedding, which also included her husband, Suyesh Rawat’s family. Mohena captioned it, “Wish you all a Happy New Year from the Rewa and Rawat Family with a message to spread Love, Peace, feeling of Unity, Happiness and good health to the World and our Country. #fromustoyou.” While it was a treat for all her fans, for some, Mohena’s look, which had a pallu drawn over her head as per Rajputana traditions, didn’t go well and trolled the star for the same. 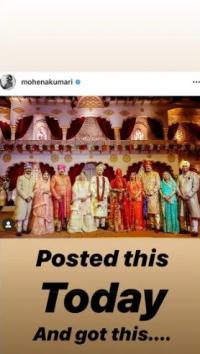 One of her followers commented on her post, “Why is your face under veil?” To which, another follower replied, “@minimalindian because these are people who follow their so called male dominated rituals. Even education doesn’t get them a brain.” Giving a befitting reply to the troll, Mohena Kumari Singh wrote, “@jiyasarna even Christians have a veil when they marry… and so do Muslims… I guess they are all uneducated too! It’s an age old Rajput tradition which Rajput women follow when they get married. This was not forced upon me.. I chose to do it @minimalindian.” Mohena’s sister-in-law, Vasundhra Raj Laxmi replied, “@jiyasarna please go see Priyanka Chopra wedding pics.. And ask her if she is uneducated?!? These are traditions… English wedding people do it, you will like it CZ it’s modern. Indian tradition you will make fun of… wow man… I wonder who is uneducated?!?”

This didn’t end here as another user misunderstood Mohena Kumari Singh’s comment and wrote, “Mohina mam, Muslims are not uneducated because it’s our part of religion which we follow.” Clarifying her comment, Mohena replied, “@anamtakhan098 guys… this is how misunderstandings start… read my comment properly. Let me spoon feed you before you misunderstand the whole thing… this person called people who follow a Rajput tradition of wearing veil, uneducated… so I said that just like Rajput’s, Christians and Muslims also wear veils… so why are they calling us Rajput’s uneducated just because we like to follow a few things that are part of our culture.” Mohena’s husband, Suyesh Rawat also commented, “@jiyasarna your awareness seems like a glass half empty not half full your perspective is like half knowledge which is dangerous you seem to be arrogant, unaware and claiming to be a pseudo intellect next time please google before throwing a statement because it might not go down with many #publicitystunt.” (Also Read: Hardik Pandya Gets Engaged To Natasa Stankovic On A Cruise, Shares Pictures Of New Beginnings)

In an interview with The Times Of India, Mohena Kumari Singh had revealed that her wedding trousseau was finalised by her mother and sister-in-law. She had said, "My entire wedding trousseau has been finalised by my sister-in-law Yuvrani Vasudhara Raj Lakshmi and by my mother Maharani Ragini Singh. I am pretty much just going to pick-up those bags and go to my new house." 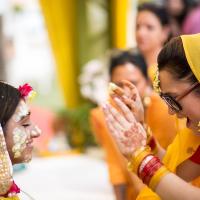 In an interview with India Today in 2012, Mohena Kumari Singh had stated that she wants to be known as an accomplished dancer and not just a princess. She had said, “The time has come for the royal families to stop imposing age-old rules and to change their outlook. I am aware of the strong opposition that will come from some royals, but, I want to follow my dreams and passion. I would want people to know me as an accomplished dancer rather than a princess. This is the first time anyone from a royal family has appeared in a reality show. I knew it from the day I auditioned for this show, that it would not be easy for my family to accept my decision. My father Maharaj Pushparaj Singh approved of me learning to dance as he thought it was just a hobby but he had warned me that I must stop it someday.” 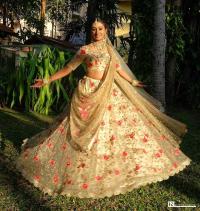 In another interview with The Times Of India, Mohena Kumari Singh had revealed whether she had faced any restrictions from her royal family pertaining to the choice of her attires, given that she belongs in the glam world. Mohena had remarked, “I have been reminded by my family that certain clothes can be avoided. But I have always taken it in the right spirit. I have parents and guardians who tell me that certain clothes aren't right and can be avoided sometimes. But they just suggest, they have never sat me down and enforced their opinions on me. When they give their opinions, I go in front of the mirror and take a look a myself deeply. If I feel that yes, they are right, I stick by their opinion and if I feel that I am fine and dressed properly, then I go ahead with what I want.” (Also Read: Rohman Shawl's Comment On Ladylove, Sushmita Sen's Workout Video Is Winning Hearts)

Guys, aren’t celeb trolls one of the nastiest things ever? Share your thoughts with us.

Mohena Kumari Singh And Her Husband, Suyesh Rawat Twin In Pastel Hues As They Attend Another Wedding 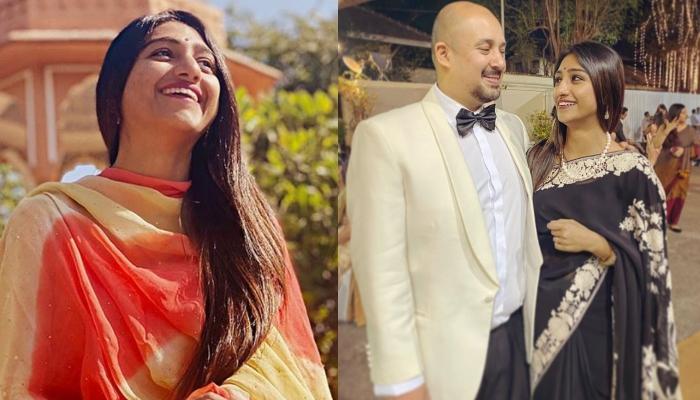 A wedding is a perfect excuse to play 'dress up' and if you are a new bahu, then this season brings in a lot of fun! You get to attend zillions of pre-wedding function as 'Missus' and the entire families' eyes are on you. Hence, you need to look your best