Misha Kapoor turned a photographer for her mommy, Mira Rajput Kapoor and it made us wonder if it is the star wife's beautiful smile that charmed us or the four-year-oldâ€™s photography skills.

For some, getting clicked is just their thing! Even though posing is hard, but to them, it comes naturally. Sometimes, it is the photoshop or the art of a photographer to capture a moment, sometimes, it is the poser, who brings out the life in a picture. Once again, Shahid Kapoor’s better-half, Mira Rajput Kapoor became a muse for her little angel, Misha Kapoor and it had made us wonder if it is the star-wife’s beautiful smile that has charmed us in the picture or the four-year-old’s photography skills. (Also Read: K.G.F. Fame, Yash's Daughter, Ayra Helps Brother, Yatharv Identify Mumma-Dadda, Radhika Shares Video)

In August 2020, Mira Rajput Kapoor had posted an IG story, wherein she had looked stunning in an ivory coloured embroidered suit with her hair half-tied at the back. While Mira was seated on an ivory couch and was all-smiles for the camera, she had revealed in the caption who clicked her mesmerising picture. Before you jump the gun and guess the photographer to be Shahid Kapoor, here’s what Mira’s caption had said, "Missy is getting quite good at this." We must say, Misha did a fantastic job in clicking her mommy’s picture and we were impressed with the little one’s skills!

Once again, Misha Kapoor turned a photographer for her mommy, Mira Rajput Kapoor and she left us impressed even this time! Mira was on a spree of sharing her lovely pictures since last evening and making our Thursday brighter, she posted a vibrant picture of herself. Sharing a picture of herself in a white dress with vibrant coloured birds on it, Mira accentuated her OOTD with a belt, minimal makeup, hair let loose and her sweet smile. Mira, in her caption, asked her fans, "Guess who clicked this" and gave a hint with a little girl emoticon. While there are no second thoughts that Mira surely knows how to make heads turn, we wonder if this time it was Misha’s pro-photography skills that made the picture perfect. Well, for us, the answer is both! (Also Read: Esha Deol Gives A Glimpse Of Radhya Takhtani And Miraya Takhtani's Artwork And It's Super-Impressive)

It was less than a month back when Shahid Kapoor and Mira Rajput Kapoor’s little sunshine, Misha Kapoor had turned 4. And while we had waited the entire day for the star parents to wish or share the glimpse of her birthday celebrations, it was only a couple of days back when Mira posted the same on her IG handle. Revealing how Misha had complained to her papa for a separate party as she didn’t want it to be combined with her baby brother, Zain Kapoor’s birthday that falls ten days after hers, Mira had written, “Quarantine Birthday My kids’ birthdays are ten days apart and I had this dreamy idea when my son was born, that I’d combine their parties for as long as Khoi bags are interesting, and save myself the stress and planning that goes into kiddie parties. Because really, the unnecessary bar has been set quite high by too many, and some of them can be as tedious as weddings. And when better to economise on stress than during this time. Missy however had another plan in mind and complained to Papa that she wants a birthday of her own and doesn’t want to share her special day... We caved and melted.”

Mira Rajput Kapoor and Shahid Kapoor had hosted a Peppa Pig themed birthday celebration for their sunshine, Misha Kapoor in their garden and it was decorated with Peppa Pig balloons, metallic streamers and even cute 3D ice-cream-shaped hangings along the table. Mira had elaborated in her caption, “For Misha, nothing tops Peppa. But instead of a full blown Peppa Fest, we made it kind of a technicolour carnival with bits of the lovable piggy. The decorations were all made by us and the fam (the DIY ones you get online) while watching some Netflix, as well as some I saved from her first birthday. The backdrop was a hand-me-down from my neice’s Peppa fiesta and cute printables brought the whole theme together from @studio_psd @printsolutionsdesign. It was so much fun, with musical chairs, a treasure hunt of weird Peppa erasers hidden all over in the garden, tug of war (Us vs the kids: no guesses on who won) and the good old Khoi bag. The menu must-have on my list was wafers and fruity along with the good ol’ party favourites that were pizza, noodles, Nutella sandwiches and jelly. It was all sorts of warm, fuzzy, and nostalgic! The kiddie birthday I always wanted to throw: intimate, full of memories and an after party mess.” (Also Read: Shilpa Shetty's Gift For 7-Month-Old Daughter Samisha Shetty Kundra Is All About Preserving Memories)

Needless to say, we love Mira’s pictures but for sure, our favourites are the ones, clicked by little Misha! 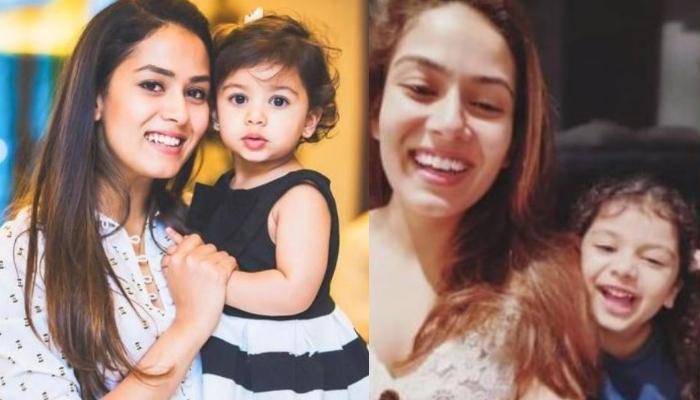 No matter how old you get, you will always be your mamma’s little princess, because even a superwoman needs her mommy time! As cliched as it might sound but a mother is the first person a daughter looks up to and nothing will never surpass the bond that they share. She