Mira Rajput Kapoor posted a picture of herself, posing in a floral printed night suit. In the caption, Mira revealed that it was her in-house paparazzo, Misha Kapoor who clicked her picture.

Every parent wishes to seize the moment of their little one’s life to live it to the fullest before the time passes by in a jiffy. But as the kids grow, it turns the other way around and the responsibility of holding the camera to click pictures is taken over by the little ones in the house, especially in the time we are living in, which is ruled by the gadgets. The tables have turned nowadays as earlier it was parents who used to teach their little ones ABCs, and now, it is the kids who teach their parents the ABCs of gadgets. Lockdown has proved to be a blessing in disguise for most people as they got to spend quality time with their family. Shahid Kapoor and his wife, Mira Rajput Kapoor too, made the most of the lockdown phase by spending time together and with their kids, Misha Kapoor and Zain Kapoor. (Also Read: Mira Kapoor Accentuates A Stunning 19k Worth Dress With Her Mother's Bangles, It Screams 'Timeless')

Mira Rajput Kapoor had given glimpses of her quarantine routine with Shahid Kapoor, Misha Kapoor and Zain Kapoor. And while Mira had made sure that Misha unleashes the artist in herself and explores different things during the lockdown, the little one has also surprised her mom with her skills. One such talent that Misha has impressed Mira with is her photography. Misha became an in-house paparazzo for Mira and the doting mommy has been giving glimpses of the same on her IG handle.

A few minutes ago, Mira Rajput Kapoor posted a picture of herself, posing in a floral printed night suit. In the caption, Mira revealed that it was her in-house paparazzo, Misha Kapoor who clicked her picture and captured her in her ‘worst OOTD’. Mira captioned her post as ““Mama! Look!” I have an in-house pap and she catches my worst OOTDs! #missyclicks.” 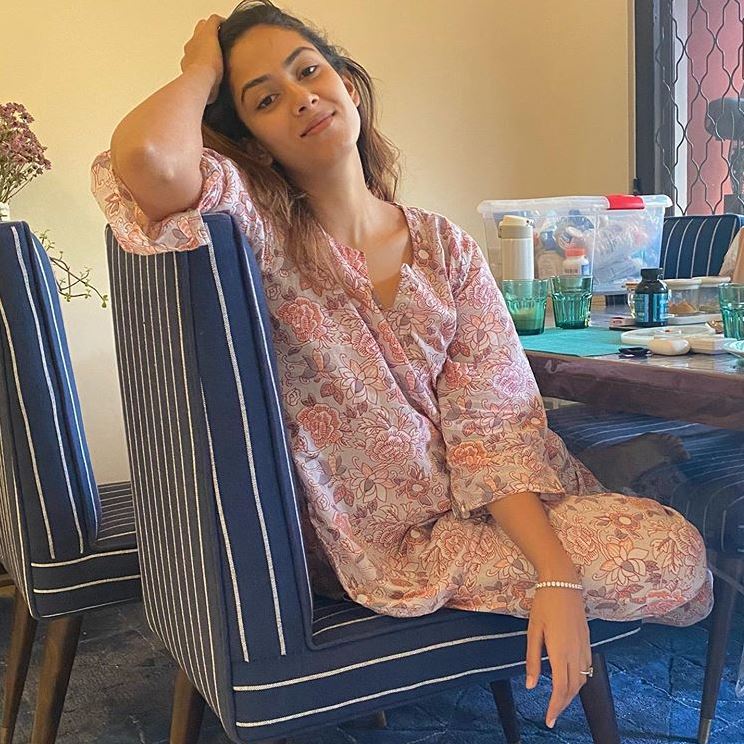 A few days ago, Mira Rajput Kapoor had posted an IG story, wherein she looked stunning in ivory coloured embroidered suit with her hair half-tied at the back. While Mira was seated on an ivory couch and was all-smiles for the camera, she had revealed in the caption who clicked her mesmerising picture. Before you jump the gun and guess the photographer to be Shahid Kapoor, here’s what Mira’s caption says, "Missy is getting quite good at this." We must say, Misha did a fantastic job in clicking her mommy’s picture and we are impressed with the little one’s photography skills! (Also Read: Mira Rajput Kapoor's Reply To Hubby, Shahid Kapoor's 'Why So Beautiful' IG Comment Is All About Love) 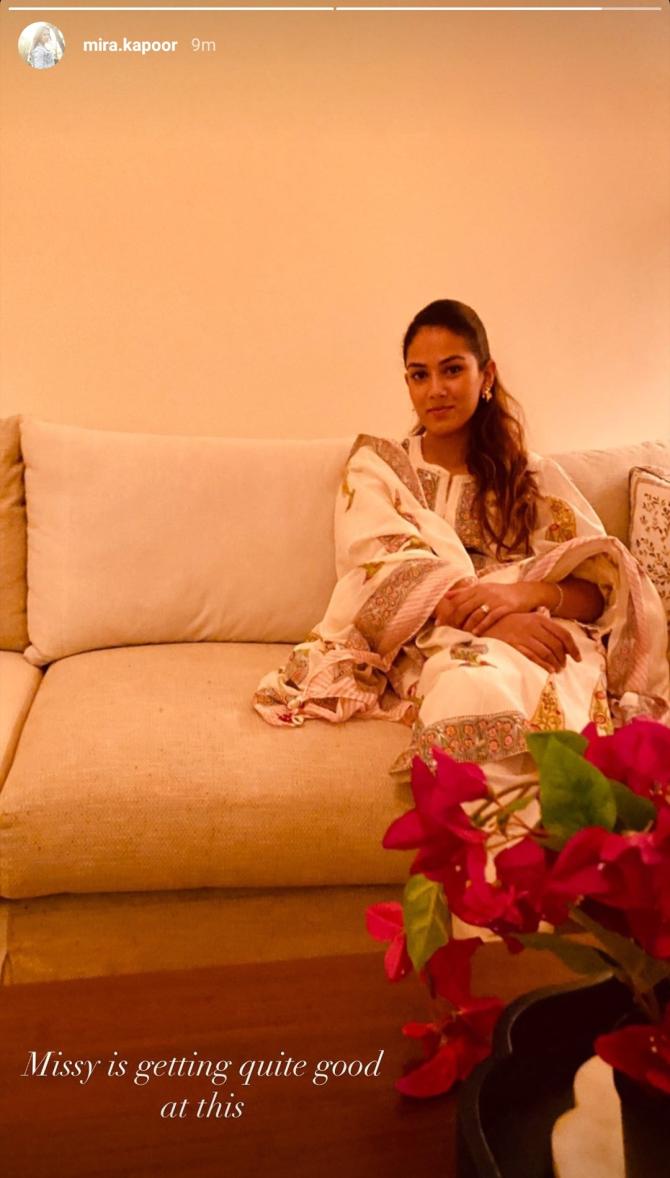 On Daughter’s Day 2020, Mira Rajput Kapoor had penned a note for her little angel, Misha Kapoor, in which she had talked about watching Gilmore Girls together in pyjamas and troubling Shahid Kapoor. Mira had written in her note, “Daughters are little pieces of heaven. My sweetheart, I hope we continue to watch Gilmore Girls in our pyjamas together, trouble your Pops, share my makeup and yes, discuss how you’re too young to wear my ring but settle for the necklace. The eye for jewellery is definitely from me, but that sparkle is all you my baby. (Four going fourteen) Happy Daughter’s Day Doll and to all the little angels out there — Hug them tight!!” She had captioned it as “Reach for the stars while riding that unicorn baby girl #HappyDaughtersDay.” 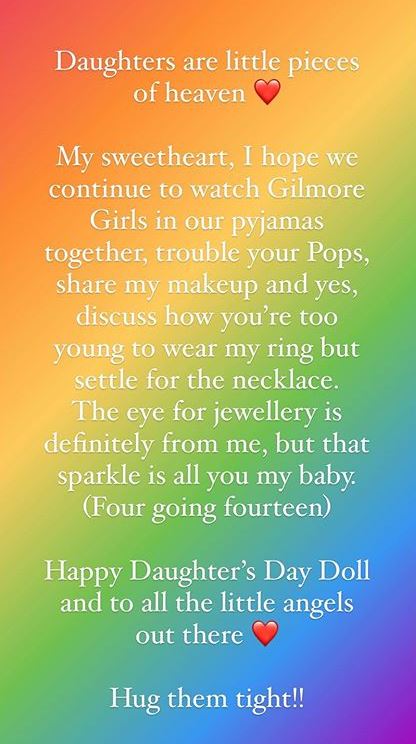 Sometime back, Mira Rajput Kapoor had posted a meme on her IG story and it was so relatable for every girl out there. Mira had posted a meme that could be read as “One day, I’ll have a sassy, know-it-all daughter and my husband will say “she got that from you” and I can’t wait” and had tagged her husband, Shahid Kapoor on it. Mira is one ‘cool mom’, and we had gotten a glimpse of it last year when Mira had posted two IG stories, wherein she had shared pictures of her little one, Misha Kapoor flaunting her new ‘temporary’ hair colour. Mira had written, “Got a hair colour at Alim Uncle’s”, “I’m not a regular mom, I’m a cool mom” atop one photo and “Relax guys, it’s just temporary. Wait till I’m 5.” on another one! Isn’t she amazing? (Also Read: Mira Rajput Kapoor Flaunts Her Life's Motto Of Being 'Not A Regular But Cool Mom' To Misha And Zain) 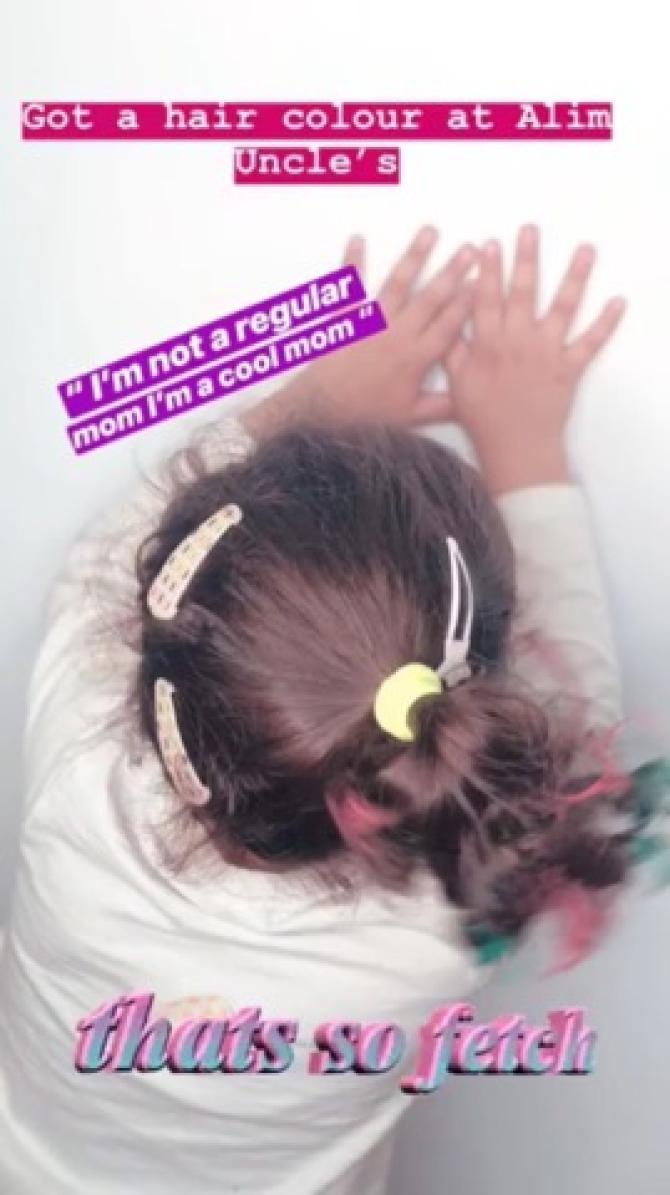 Did you like Mira’s picture clicked by the little one, Misha? Do tell us!