Mira Rajput Kapoor's Reply To Hubby, Shahid Kapoor's 'Why So Beautiful' IG Comment Is All About Love

Mira Rajput Kapoor's Reply To Hubby, Shahid Kapoor's 'Why So Beautiful' IG Comment Is All About Love

Mira Kapoor posted a video on Hair Care, wherein she revealed details about her hair type and changes that came along with her pregnancies. Awed by her beauty, find out what Shahid Kapoor commented. 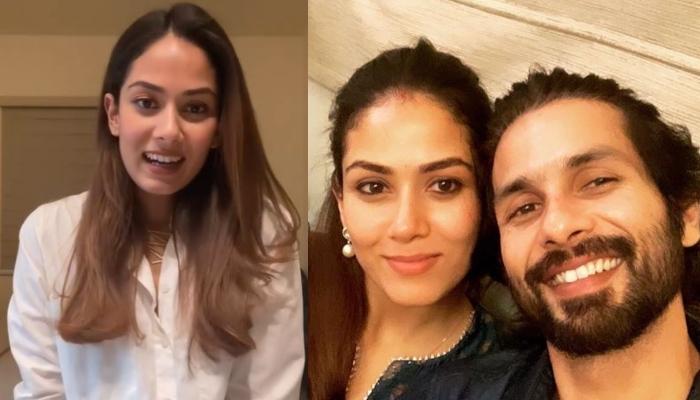 Since most of their life is spent under the limelight and media scrutiny, the stars are protective about their love lives. And the social-media obsessed world where we live in, celeb couples make us gush over their PDAs every now and then. From liking their partner’s pictures, tagging each other in memes, reminiscing ‘this day, that year’ posts, giving glimpses of milestones they’ve achieved together, flaunting their own hashtags, showering love on their posts to pulling their legs too sometimes, the celeb couples’ social media PDA proves that just like Bollywood movies, even real life has its happily ever after. (Also Read: Mira Rajput Kapoor Gets Trolled For Casually Using Disorder, 'Split Personality' In Caption As A Pun)

Ever since Shahid Kapoor had announced his wedding with a Delhi-based girl, Mira Rajput, there have been abundant of ‘Shahid and Mira’ moments which had taken our hearts away! If there’s one couple, who never goes overboard with their PDA and do it just in the right amount, it’s Shahid and Mira. In February, Mira had attended an exhibition and a sculpture had reminded her of her hubby, Shahid. Mira had tagged Shahid in an IG story, which had a romantic sculpture. Reposting the tagged picture, Shahid had written, “You are my (heart emoji)” atop it. Aren’t these two, goals?

Mira Rajput Kapoor posted a video on Hair Care, wherein she revealed details about her hair type, how Mumbai water and weather suited her hair, and the changes that came along with her pregnancies. Mira captioned the video as “Hair and all that Part-1 ALL ABOUT MY HAIR From frizzy nightmares to the hair of my dreams, this is my ‘hair story’. Stay tuned for the next video which has my favourite products, go-to tools and a very special hack!” Awed by her beauty, Shahid Kapoor commented, “Why so beautiful” followed by a heart-eye emoji. To which, Mira replied, “@shahidkapoor Wait for Part-2 hope you still love me.”

Shahid Kapoor and Mira Rajput Kapoor have always been so much in love that they don’t hold back themselves and, time and again treat their fans a little bit of their PDA! Holi 2020 too, was no different. While Shahid and Mira always make sure to celebrate the special occasions and festivals with each other, Mrs Kapoor had celebrated Holi with her girl gang sans Mr Kapoor. But Mira hadn’t left the chance to flaunt her love for Shahid and had given him a perfect gift. Donned in a multi-coloured top and a yellow skirt, Mira had flaunted a SK tattoo painted in red on her neck. Mira had flashed her million-dollar smile, looking sideways donning glares and had captioned her post as "Love life in technicolour." (Also Read: Mira Rajput Kapoor Reveals Her Favourite Thing To Do During Her Kids Misha and Zain's Online Classes)

Sharing an instance when Shahid Kapoor had expressed his feelings on social media for his darling wife, Mira Rajput Kapoor, it was on December 23, 2019, that Mira had posted a scenic picture, dressed in a jacket with jeans and sneakers, flaunting her sunshine smile. Mira had captioned her ‘I am on top of the world’ post as “Such a feelin's comin' over me, There is wonder in 'most everything I see, Not a cloud in the sky, got the sun in my eyes, And I won't be surprised if it's a dream, I’m on the top of the world.” Just like we were in awe of Mira’s beautiful picture, Shahid too couldn’t stop admiring his gorgeous wife. Shahid had commented, “The sun looks pale compared to you” followed by a heart emoticon.

Remember when Shahid Kapoor and Mira Rajput Kapoor had completed one year of togetherness and Mr Kapoor had posted a beautiful photo with his missus on Instagram, sharing their ‘kiss of love’ moment? Shahid had captioned it as "Happy first anniversary my love. @mira.kapoor you are my sunshine." Then on Diwali 2018, Mira had given their fans a glimpse of their ‘us’ moment, wherein the lovebirds were lost in a passionate kiss, which went with the caption, “Only love Happy Diwali!” (Also Read: Shahid Kapoor's Baby Girl, Misha Kapoor Follows Mommy, Mira Kapoor's Footsteps And Turns Cake Lover)

We love how Shahid and Mira never shy away from showering love on one another!