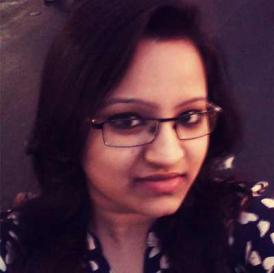 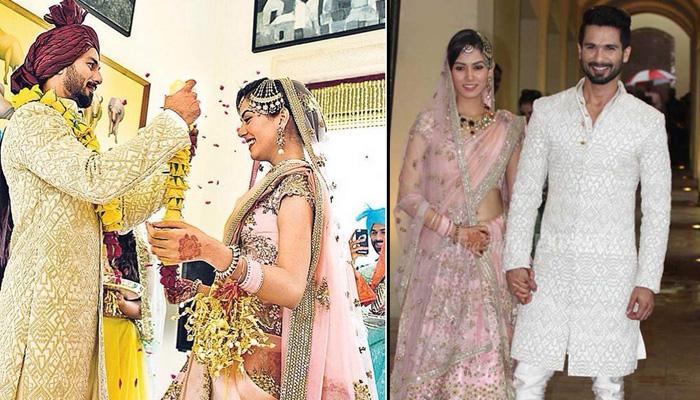 This one has been one hell of an arranged marriage in Bollywood, which created even more buzz than Shah Rukh Khan and Salman Khan's Iftar party patch-up hug! But now, Shahid and Mira Rajput Kapoor have turned into paparazzi's recent favourites. Right from the announcement of their engagment to the moment the duo arrived at their Mumbai house as the newlywed couple, we heard it all! Even Mira, who chose to keep a low-profile prior to her wedding, could not sway the fans and media's attention away from her during the wedding functions.

Be it her bridal shower, sangeet, mehendi, wedding or reception look, she left all of us in awe with her stupendous style picks! Matching her was her husband Shahid Kapoor, who too nailed every single of his wedding looks! So, here we are giving you a detailed description of this beautiful couple's wedding attires!

For the kalire ceremony, Mira picked a lemon yellow georgette kurti with front and side slits, teamed up with off-white flared palazzo pants. The best feature of her entire look, were the floral garland and tiara made out with white lilies. She kept her makeup subtle and paired it up statement mirror work jewellery.

Find out who else got married a day before Shahid: A Sneak Peek Into Minissha Lamba's Wedding With Long-Time Boyfriend Ryan Tham

Mira's choice of attire for the mehendi and sangeet ceremony totally floored us all. For the occassion, Anita Dongre designed her a fabulous peach coloured backless choli teamed with a yellow coloured lehenga and a matching dupatta. Yet again, she kept on a floral garland prepared using yellow jasmines, which complemented her look.

Her simple take on the jewellery quotient won our hearts. Just a a pearl maang tikka, a statement neck piece and matching earrings, and she was all done for the ocassion. Even her makeup was brilliantly done, nude makeup with hints of lightest of pink blush.

And, now comes the man of the hour, our groom, Shahid Kapoor. Sasha's look for the sangeet ceremony comprised of a maroon coloured Nehru jacket atop brick red coloured kurta paired with black churidar and matching shoes. He kept his well-gelled hair in side partition, and in an attempt to complement his bride, he wore a gajra made of jasmine flowers around his right wrist.

Do Read: 8 Bollywood Couples With More Than 10 Years Age Gap

For their Anand Karaj ceremony, the couple kept their attires quite simple. Mira wore a pink and green churidar suit. She covered her head with a matching pink dupatta complete with golden brocade embroidery. Her hair were left loosely tousled. And as for jewellery, she wore nothing but a simple maang tikka (the same one she wore during her sangeet ceremony as well).

Shahid, on the other hand, was dressed up in plain white well-fitted kurta pyjama. During the Anand Karaj ceremony, he covered his head with a traditional pagdi. Though for their first post-wedding selfie, Shahid took off the pagdi revealing his perfectly gelled hair.

Recommended Read: 11 Famous Bollywood And Television Couples Who Had An Arranged Marriage

Shahid Kapoor and Mira Rajput Kapoor's post-wedding apperance for media and fans was quite a moment. Both newlyweds changed into different attires, and left us stunned. The charming groom looked every bit of a hottie in an ivory achkan with detailed work and churidar, designed by his friend Kunal Rawal. But, all the eyes were definitely on Mrs.Shahid Kapoor, who looked nothing less than royalty. Designer Anamika Khanna kept it chic and subtle for Mira, and choose a colour that only added more beauty to the already beaming bride. Mira Rajput chose to go with the lightest shade of pink adorned with silver and golden work.

Mira's post-wedding attire had traces of European royalty. She definitely carried it well with a statement neckpiece made of coloured gemstones, a traditional half sun maang tikka and a jhoomar. Her lehenga was with a backless choli. Her makeup was done again, in the lightest of shades with a subtle pink blush swept across her cheekbones. And, it all brilliantly complemented her skin tone. For her post-wedding appearance, she tied her hair in a tight bun with the front part set in a right side parting. Her hair bun was held with a beautiful floral clip. According to designer Anamika Khanna, "Mira had it all clear in her mind, she was confident about what her bridal trousseau would look like, what shades, fabric etc. She knew what she wanted and made sure she got it right with all her looks."

Unlike the couple's private wedding, their reception was a gala affair with over 500 guests coming in to bless the newlyweds. Mira's stupendous style sense became even more evident with her choice of attire for the wedding reception. Shahid on the other hand, played it safe with a black bandhgala. Needless to say, Mira stole away the show from her groom.

Mira went ahead with a design from Anamika' s 2014 runway collection. For the reception, Mira was dresed up in an elegant dress with beige embroidery complete with sheer net cape with work on its borders. She teamed it up with a heavy multi-layered emerald neckpiece and earrings. Her makeup was as usually well done and she kept her hair loose.

This newlywed couple hosted a grand wedding reception in Mumbai, on July 12, 2015, for Shahid's friends from the Bollywood industry. Amitabh Bachchan, Ranveer Singh, Anil Kapoor, Sonam Kapoor, Alia Bhatt, Shraddha Kapoor, Preity Zinta and many more known faces graced the occasion to bless the couple. For the grand night, Shahid Kapoor put his faith yet again, in his best friend Kunal Rawal's creation, a three piece black suit. While Mira left us all stunned in this chic white and blue lehenga by Manish Malhotra.

The outfit was a pick from the designer's Lakme Fashion Week Summer Resort 2015 runway collection. This beautifully adorned rose motif embroidery lehenga was worn by Mira sans the loose strings that matched the top (as in the orginal outfit). For jewellery, she stuck to a pair of striking earrings by Nirav Modi and a bracelet on her left wrist.

It looks like Mira Rajput is inspiring top Hollywood stars with her style statement. Kate Winslet was seen wearing the same design danglers at the Oscars 2016 that Mira Rajput had worn during her wedding reception last year.

For her reception look Mira kept her hair in half-up half-down hairstyle with some loose tousles over her shoulders.

Recommended Read: 5 Reasons That Will Convince Anyone Why Shahid Kapoor Will Make A Good Husband

We bet, with Mira displaying that brilliant style sense, our Dilli ki kudi is surely going to give the Bollywood's fashionista wives, a run for their money. And, Bollywoodshaadis wishes this gorgeous couple a happy and blissful marriage!