Mira Rajput Kapoor posted a throwback stunning sunkissed selfie on her IG handle in which she flaunted her love for bling. She opted for a choker, a long neckpiece and a pendent.

Ever since Shahid Kapoor had introduced his better-half, Mira Rajput Kapoor to the world, she has, without any fail, impressed us with her classic sartorial preferences, which she had often given her millennial twists. Mira never shies away from experimenting with her outfits and with her every look, it is difficult to believe that she is the mother of two kids. Mira can give any actress a run for their money as she always puts her best sartorial foot forward, which aren’t influenced by the cyclical fashion trends of Bollywood but by her comfort.

Sans her hubby, Shahid Kapoor too, Mira Rajput Kapoor has her own fanbase and is deeply admired by her followers. Anything she publishes on social media gets viral in no time and she keeps her followers engaged with her posts. In a lovely sunkissed car selfie that Mira posted on her account a few hours ago, she sported a blue denim jacket with a red rose embroidered on one side paired with a black tank top. Mira’s look was accentuated with oversized sunglasses but it was the huge rock on her ring finger worth 23 lakh that had grabbed our attention. With the rays of sun hitting Mira’s solitaire wedding ring, it shone to its glory. 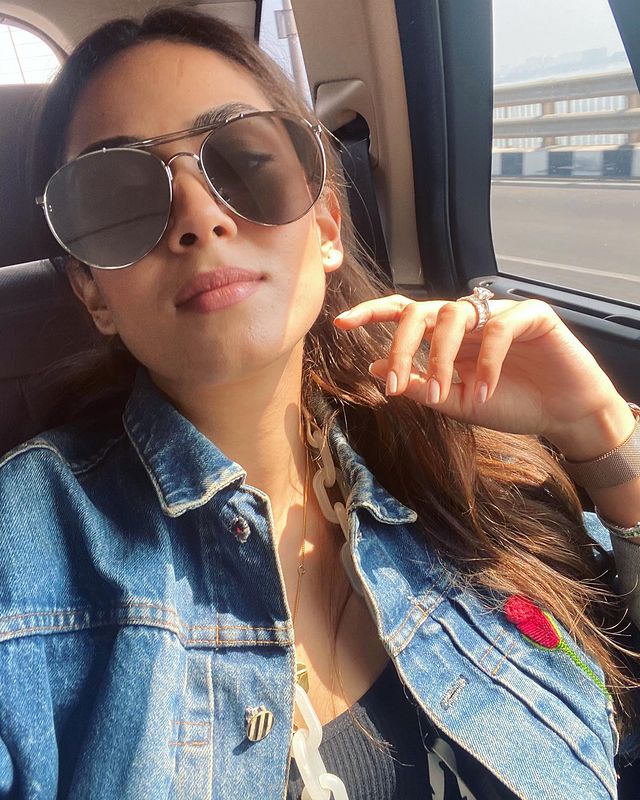 Mira Rajput Kapoor has proved to be quite the fashionista and her every look sets a new trend. A few hours ago, Mira posted a throwback stunning sunkissed selfie on her IG handle, in which she flaunted her love for bling. Mira opted for a black-and-white OOTD and it was completed with a choker and a long neckpiece by Studio Metallurgy. Mira accentuated her look with a pendant by Nicobar. Mira's picks from Studio Metallurgy are priced at Rs 12,500 for the choker and Rs 16,600 for the long neckpiece. Mira left us gushing over her chic monochrome look with blingy jewellery and she captioned her post with her own name in Hindi. 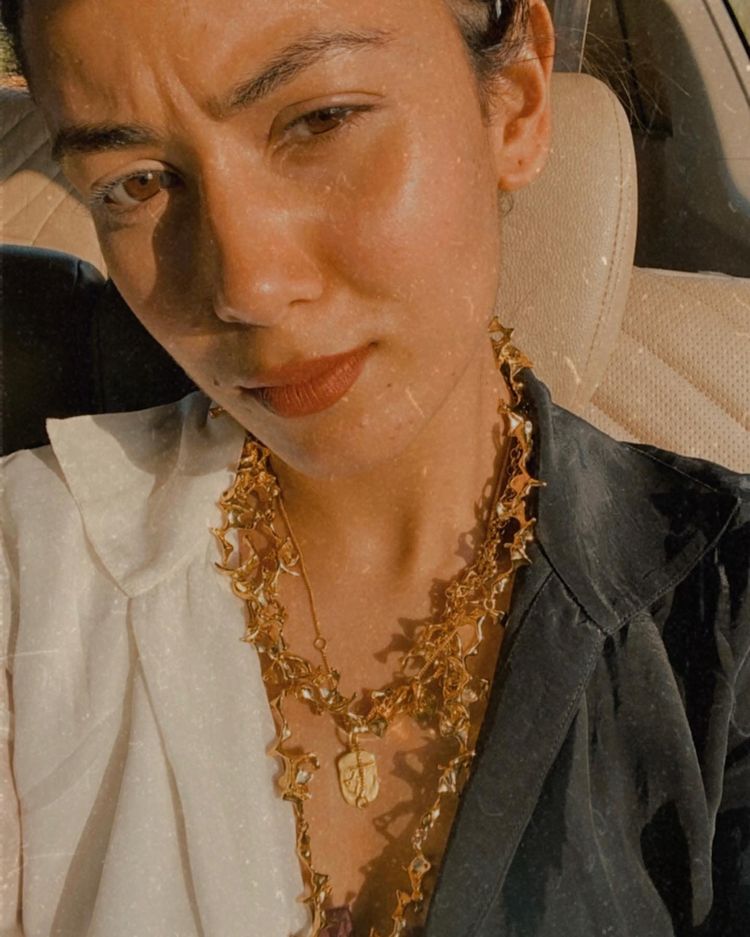 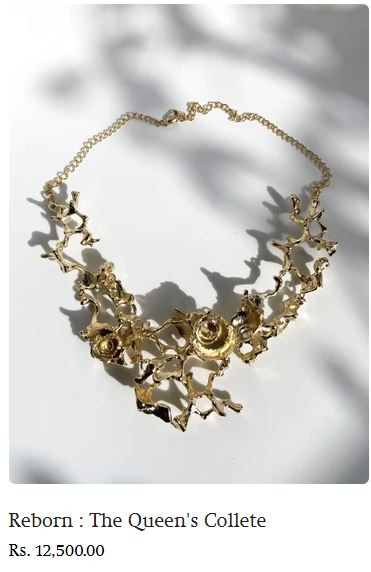 It was in January 2021 when Mira Rajput Kapoor had flaunted a look inspired by the character of Moira Rose from the award-winning Canadian series, Schitt's Creek. Mira had sported a print draped long crepe dress by her designer-friend, Masaba Gupta and it was a perfect pick for the holiday. Mira had captioned the post as “Gossip is the Devil’s telephone. Best to just hang up. No Schitt I had to do this at The Postcard Hotel, Moira.” On her post, Shahid had praised her for being so effortless and commented, “Poser alert. Looking swish my love. Effortless.” 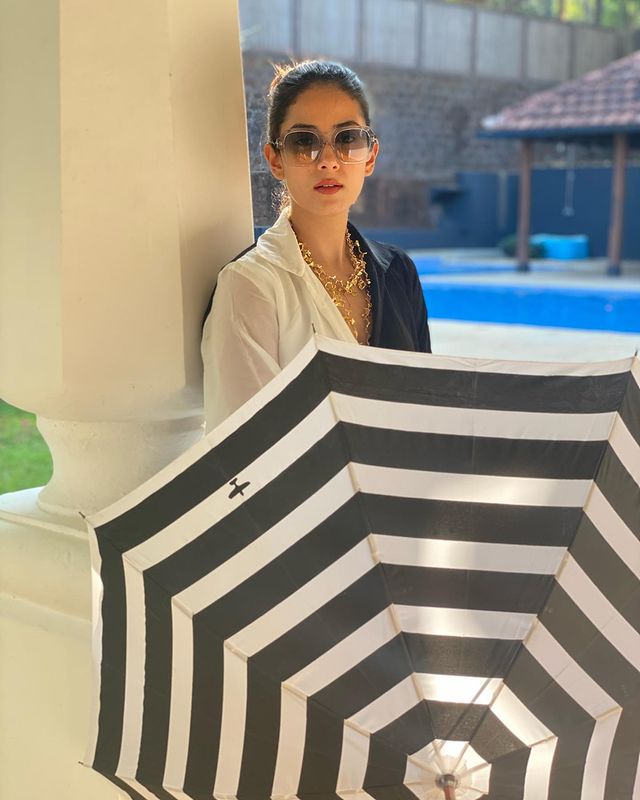 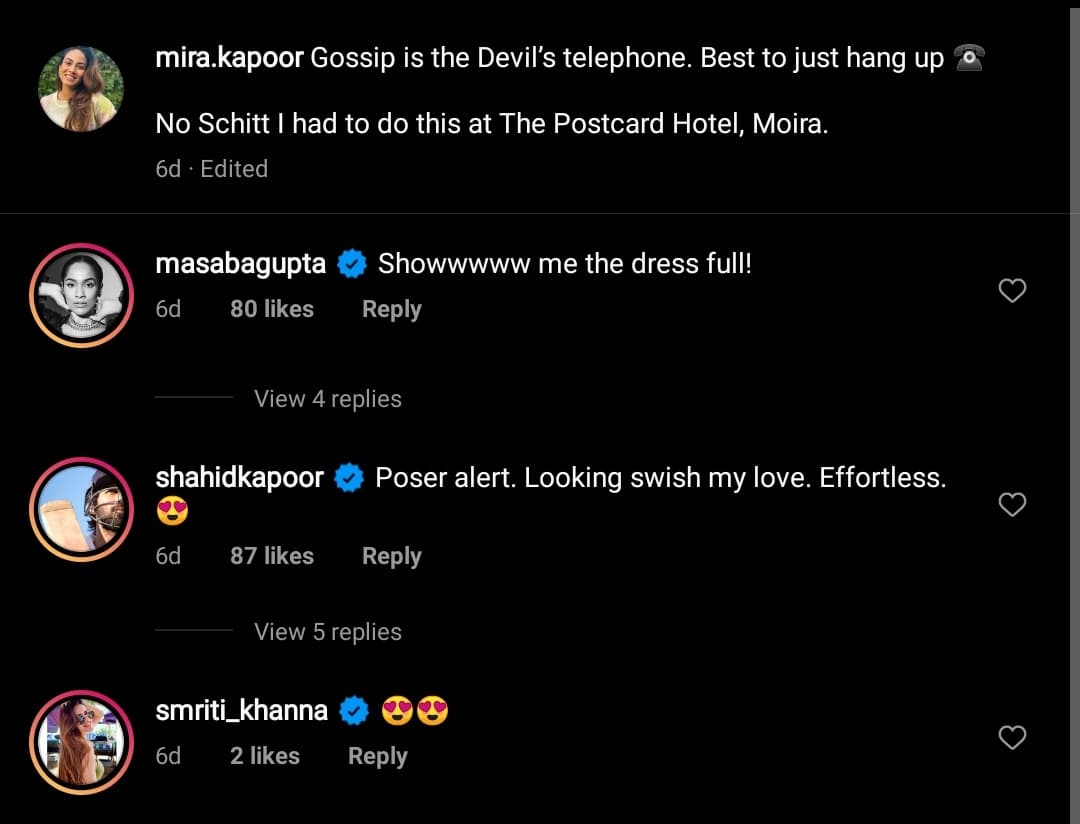 Sometime back, Mira Rajput Kapoor had given us another inspiration for an off-duty look as she picked a two-toned pink shirt with white trousers for a Zoom call meeting at her home. Mira made a statement with her half-and-half shirt, bringing the much-loved red and pink combo together and her Essgee shirt featured two heart-shaped cut-outs at the waist which were held together by drawstrings. Mira had opted for Misho’s pebble pods, which held her earphones in place. Her Zoom-ready outfit costed more than Rs 12k as the shirt by Essgee is priced at Rs 3,300 and the pebble pods cost Rs 9,000.

Also Read: Mira Kapoor's Multicolored Saree For Her BFF's Wedding Is A Perfect Blend Of Modern And Traditional 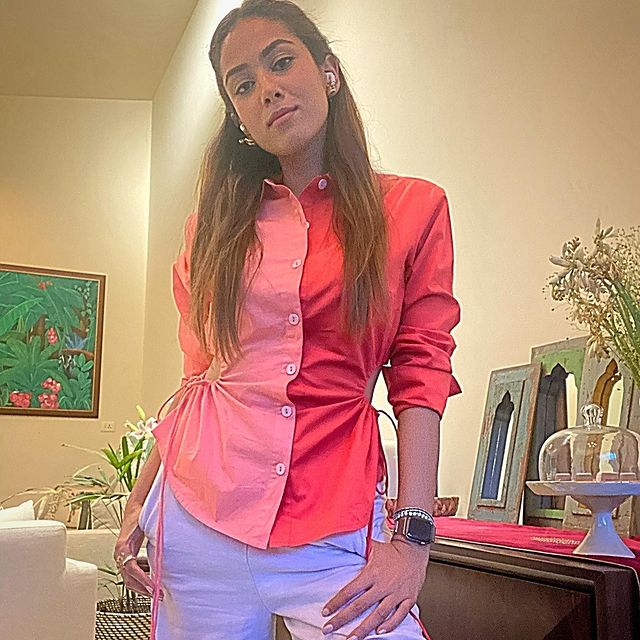 Just like Mira Rajput Kapoor, her know-it-all daughter, Misha Kapoor is a social media sensation with her on-point style game and not only does the little one has followed the footsteps of her mother when it comes to fashion, the star-wife has also incredibly passed on values and teachings of life to her daughter. In August 2020, Mira posted a picture of Misha’s collection and it had spoken volumes about the little one’s obsession with jewellery. Mira had captioned it as "I guess the jewellery obsession runs in the family. #Startthemyoung also #birthdayweek #hinthint." Mira also gifted Misha a beautiful, customised pendant a few months ago and had given a glimpse of the same on her IG stories. 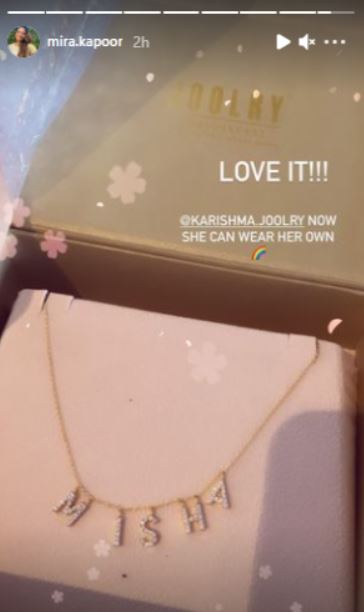 Mira's IG feed is a perfect place for inspiration for fuss-free but striking OOTDs!

NEXT READ: Khushi Kapoor's Dior Saddle Bag's Price Is Equal To The Cost Of A Luxurious Vacation In The Maldives