Mira Rajput Kapoor took to her IG handle and shared a cute boomerang of her kids, Misha and Zain. She gave an insight of what her kids wore at the family wedding. Check it out!

The Kapur clan is enjoying the best phase of their lives as, the veteran actors, Pankaj Kapur and Supriya Pathak's daughter, Sanah Kapur had tied the knot with the love of her life, Mayank Pahwa. It was an intimate wedding on March 2, 2022, which was taken place in Mahabaleshwar. Shahid Kapoor had attended his half-sister's wedding and had added that extra charm.

However, it was Shahid Kapoor and Mira Rajput Kapoor's kids, Misha Kapoor and Zain Kapoor, who had stolen the show with their cuteness. Also, they had attended their first-ever shaadi. Pictures and videos from Sanah and Mayank's wedding and pre-wedding functions are still doing rounds on social media platforms, and we can't stop gushing over them. 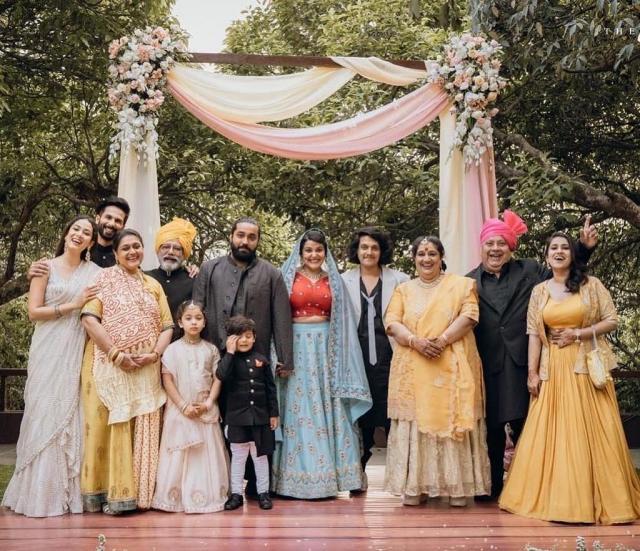 A few moments back, Mira Rajput Kapoor took to her IG handle and shared an adorable boomerang of her kids, Misha and Zain who were enjoying their time on the swing. Calling them Kudrat Ke Nazaare, their doting mother penned a note that could be read as:

"So the kids went for their first ever Shaadi and all I was thinking about was all the stuff they’d eat and drink away literally like kids in a candy store and be utterly spoiled by the entire family. Let’s just say, they had a blast!"

Further, she mentioned in the caption what her kids had worn for wedding and pre-wedding ceremonies and shared that she had to get their clothes overnight and had to match them with backups. For dhol, they had worn matching sharara set and kurta pyjama with heart buttons. At mehendi, Misha and Zain had donned powder blue gota sharara set and matching chikan Nehru jacket and kurta pyjama.

Read This: Vikraant Singh Reveals How He Keeps The Spark Alive With His Wife, Monalisa Biswas For the chooda ceremony, they had draped block printed sharara and matching Nehru jacket and kurta pyjama set. And lastly, for the wedding, the kids had opted for something gorgeous. While Misha had worn a lehenga with delicate embroidery and matching potli, Zain had donned a Papa-matching Kurta and breeches. A picture is doing rounds on the internet from Sanah Kapur's chooda ceremony. As she was walking towards the sitting area, she could be seen holding the hands of her elder brother, Shahid Kapoor. His kids, Zain Kapoor and Misha Kapoor were also accompanying their bua. In twinning yellow-coloured outfits, looking absolutely adorable. Zain and Misha were the most well-dressed little guests at Sanah Kapur's wedding. What do you think? Veteran actors, Pankaj Kapur and Supriya Pathak's daughter, Sanah Kapur had tied the knot with the love of her life, Mayank Pahwa, in an intimate wedding on March 2, 2022. We had witnessed a magical affair in the hills of Mahabaleshwar. Shahid Kapoor and his family had attended his half-sister's